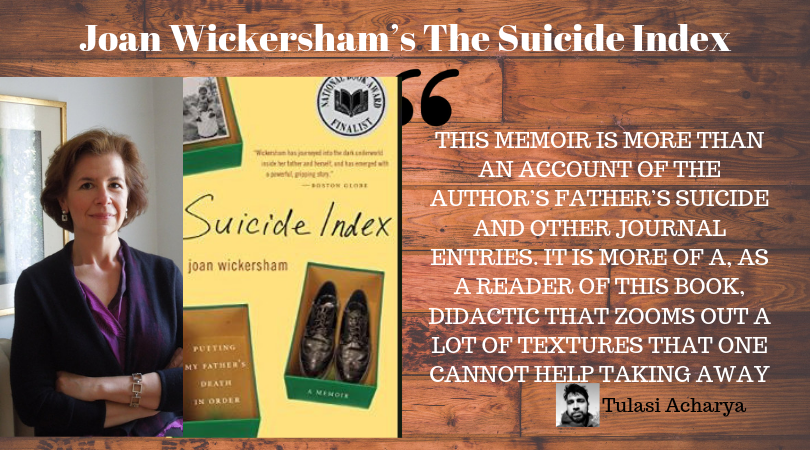 Joan Wickersham’s The Suicide Index is a memoir on how her father shot himself to death and how, in its wake, qualms, queries, insecurities, and fear gripped the psyche of the immediate family  members, most importantly the author’s, and others. The author in her memoir, in search of the cause of her father’s death, exhumes innumerable oddities and obscurities that might have abetted him to commit suicide. It is the author’s journey, after her father’s death, riding a chariot of time back and forth, reflecting on who he was, his upbringing, his family relationship, people and places he was acquainted with, and the business he was involved in. This memoir is more than an account of the author’s father’s suicide and other journal entries. It is more of a, as a reader of this book, didactic that zooms out a lot of textures that one cannot help taking away: What might be the reason of a suicide? Why might people tend to commit suicide? How one’s suicide affects the lives of the survived ones and in what way? How can the survived ones cope with such a horrendous incident in life? Is suicide a topic for whether it is moral and ethical or rational? What can be the future discourse on suicide? How important is it to discuss with children? What is the role of a psychotherapist when a person goes through such a state of mind? How taboo is suicide and how this should be broached in a conversation? What are its psychological impacts? What should be the role of a husband or a family member at that time? The book aims at exploring the rejoinders of these questions. The author’s role here is to be a “posthumous mind reader” and perhaps inviting the reader to do so.

The memoir begins with the author’s attempt to imagine her father’s act of suicide followed by a “bare-bones account” of it and its “immediate aftermath.” Then the author assesses it reflecting on her father’s attitude towards suicide. She writes, “And although I certainly heard him use the words ‘wrong’ and ‘terrible’ and ‘unacceptable’ in connection with suicide, I also heard him speak of it quite differently.” Each page walks the reader, who might be willing to invest their time, through the author’s consciousness. It establishes a phenomenological relationship between the ideas in the memoir and the perception of the reader. After one third section of the book, the author deviates from the chronological narratives and starts jumping around here and there reflecting on different time periods, events, and incidents to explore her father’s connections in her quest for knowing the truth. In this course, the author unravels different factors that might have direct or indirect influence upon her father’s suicide, with some tinge of humor that is subtle. The memoir also brings in a few narratives from others whose immediate family members committed suicide that substantiates the author’s voice, and other “philosophical conundrum” that stems from suicide. In a later chapter, the author incorporates some readings from the literature of suicide followed by her mother’s most recent condition and the author’s where still dwells her father’s memories, leaving the reader to mull over the idea of suicide.

Beautifully and lucidly written, the author presents and describes the scene lively. The conversation is very visual, real, and authentic. The reader hears her, walks through her, feels her, sympathizes with her, and gets enlightened.

Structurally, this is a unique form the author has employed. As the title The Suicide Index suggests, each chapter is made of under each index that weave in interconnectedly to make the story whole. Each and every discussion under each index is engaging, thought provoking, and powerfully beautiful, such as “suicide: numbness and husband” projects a great argumentative scene, “suicide: opposing version of” demonstrates a very painful scene and so on.

As a reader, I was slightly befuddled for not having specific dates and time, and for mixed up and not chronologically ordered incidents at times, but that could be acknowledged as the author’s structural prowess  to suit the theme of the memoir. At some places, I was expecting more of the author’s feelings and emotions triggered by her father’s suicide, and I am not sure whether that was the strength or the weakness of the book.

Overall, this memoir is an awesome read even for the one who wants to be a writer, a biographer, and a memoir writer.