Patches of Clouds and Blue Sky 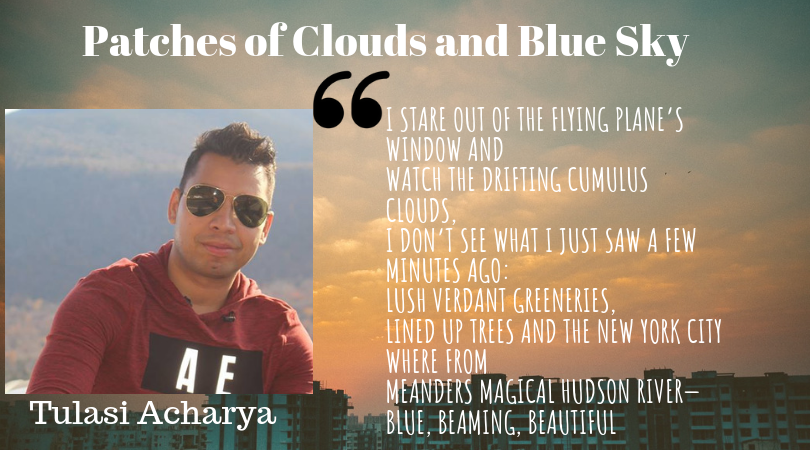 While an airplane flying above the clouds over the American sky,
I, on the plane, get lost on the plane of imagination.
I question: How many times might have our politicians,
Whom I, my grandmother, we elected to rule us, flown on such planes
Over American skies, European skies,
The skies for which the faces of people like me,
Like the faces of the politicians’ children line up in front of the visa centers and
Those faces return exhausted, poor, and lost when the visas are denied?
To fly over such skies,
They borrow cash with higher interests and pay it to the Manpower and
Leave abroad for labor jobs. With them, they carry a fragile future
That becomes a curse, and
Only tears and wails return to their homeland in a closed casket.
Some of them make it to the Gulf of Mexico; some of them manage to swim;
Some are shot to death or swept like a cremation log.

I stare out of the flying plane’s window and
Watch the drifting cumulus clouds,
I don’t see what I just saw a few minutes ago:
Lush verdant greeneries and organized housing,
Lined up trees and the New York City where from
Meanders magical Hudson River— blue, beaming, beautiful—where,
In the midst, stands the Statue of Liberty, with her youth full throttle,
The colossal Brooklyn Bridge that connects the boroughs of Manhattan and Brooklyn—
So monumental, so magical—the sky scrapers,
The cars, the trucks, the trains that gush like a river of Nepal-Himalaya,
The planes taking off one by one,
The planes landing one by one.
Now, all of them disappear on a spur.

After my two hours flight, the plane descends
Over the Atlanta city of Georgia,
Reminding me of the scene at the time of my take off.
As the plane collides with the clouds, shoving off my imagination,
I wonder why this country is like this and mine is not.

My country and the leaders of my country that survived
By the Nepali people’s remittance
Only saw the patches of clouds and the blue sky
While they flew over, but they never saw
The New York City, the Atlanta City, London and Paris,
China, the neighboring nations, or Japan or something similar to it.