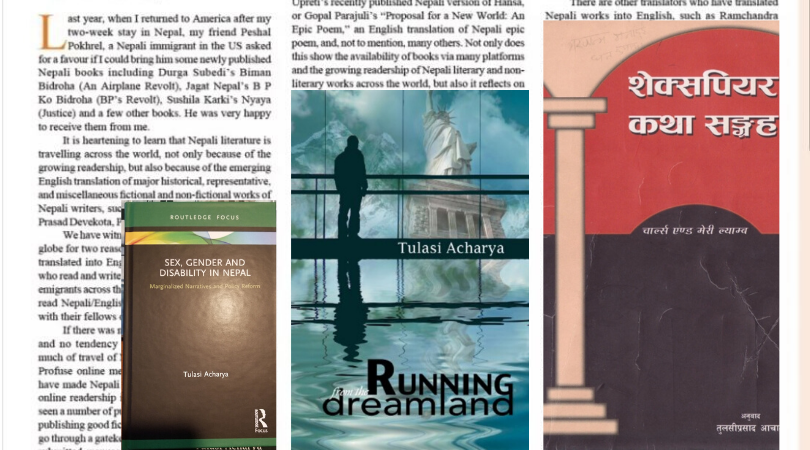 Last year, when I returned to America after my two weeks stay in Nepal, my friend Peshal Pokhrel, a Nepali immigrant in the US asked me for a favor if I could bring him some newly published Nepali books including Durga Subedi’s Biman Bidroha (An Airplane revolt), Jagat Nepal’s B P Ko Bidroha (BP’s revolt), Sushila Karki’s Nyaya (Justice) and others. He was very happy to receive them from me.

It is heartening to learn that Nepali literature is travelling across the world, not only because of the growing readership, but also because of the emerging English translation of major historical, representative, and misscallaneous fictional and non-fictional works of Nepali writers, such as Guru Prasad Mainali, Laxmi Prasad Devekota, Parijat, Jhamak Ghimire and others. We have witnessed a wider readership across the globe for two reasons: one, the works that  have been translated into English have access to many people who read and write in English; two, increasing Nepali emigrants across the world have a tendency to buy and read Nepali/English books and share their contents with their fellows or lend books to each other. If there was no access to these translated books and no tendency to read, there wouldn’t be this much of travel of Nepali literature across the globe. Profuse online media that publish reviewed books have made Nepali literature travel as the number of online readership is growing vehemently. We have seen a number of publication houses, that have started publishing good fictional and non-fictional books that go through a gatekeeping before the acceptance of the submitted manuscript, growing in recent years, for example Fine Print and BookHill and others. Sajha Prakashan is also promoting Nepali authors and their works. To the availability of the books across the globe, technology and other online platforms have played a pivotal role and made things much easier. If we need to read a Nepali book or the book translated into English while abroad, one can easily order certain books from amazon, an American multinational technology company based in Seattle that focuses on e-commerce, cloud computing, digital streaming, and artificial intelligence. One can also directly publish a book via Kindle Publishing and make it available via amazon (Although it has some disadvantages because anyone can publish them without any peer reviews and editing). I have seen many Nepali books or the books translated into English made available on amazon where anyone can have access to if they want to receive either a hardcopy/paperback or a digital one. I have seen on amazon Krishna Dharabasi’s Radha, a translated version of Nepali Radha novel, Sanjeev Upreti’s recently published Nepali version of Hansa, or Gopal Parajuli’s “Proposal for a New World: An Epic Poem,” an English translation of Nepali epic poem, and, not to mention, many others. Not only does this show the availability of books via many platforms and the growing readership of Nepali literary and non-literary works across the world, but also it reflects on the promising future of the growing readership and the travels of Nepali literature/works and culture.

One of the interesting things that have been happening in Nepali literature, as I somewhat mentioned previously, currently is translation. Translation is not an easy job because it requires a correct cultural interpretation of the writing originated in a culture where the author was born and raised to the language which the author never spoke as a native language. Culture is integrated with the language, and it is not easy to translate the culture into the language which, at times, may never exist in the original language the text was written. Translation demands patience, perseverance, research, sensitivity, and the practice of walking into the shoes of others’ culture.  However, Mahesh Paudyal, a young writer, critic, and translator has been doing an amazing job in the context of translation. He has been profusely translating many works, such as Krishna Dharabasi’s Radha, other major representative Nepali stories, and many others. There are other translators who have translated Nepali works into English, such as Ramchandra K.C. who has translated many English stories into Nepali and Nepali into English, such as Kaflka’s Metamorphosis in Nepali and “Rebel,” a collection Nepali war stories translated into English. They are now available on amazon. I myself have translated Shakespeare’s short stories edited by Charles and Mary Lamb into Nepali as “Shakespear ka Kathaharu.” The question now is: is this enough for Nepali literature to travel across the world and attain a wider readership?  How much can we be positive in the context of growing readership across the world? Can we be content with what has been happening in terms of growing readership and translation of Nepali to English and vice versa?

Actually, we should not only focus on translating Nepali to English or English to Nepali with an idea that it would help our literature and culture travel, but also we should practice translating other languages into Nepali for our literature to grow more, and that is what I learned from some conferences and seminars. It reminds me of a book “Khubuj,” a beautiful novel of a heart wrenching story of a person who goes to an Arabian country for a job and ends up being abused, but he survives a tumultuous, scary, and pathetic journey of life, translated from English into Nepali by Dinesh Kafle who is also translating Nayan raj Pandey’s “Ular” into English. Originally, the book “Khubuj” was written into the Malayalam language with a title “Goat days” in English. Although Kafle did a great job by translating the book into Nepali, it was not actually translated into Nepali from Malayalam directly so there might have been many things lost in translation. The Nepali publication houses may cultivate such talents and translators who can directly translate not only from English to Nepali or vice versa, but from many other languages into Nepali too.  I wonder if Nepali book publishers can encourage those who would be willing to translate not only into English from Nepali or from Nepali to English but from Nepali to many other languages.  Perhaps, this practice might make Nepali literature travel beyond what we could imagine, and we could be even more hopeful about its promising future. How/what could International Nepali Literature Society think about it beyond merely holding conferences every year in different countries and publishing a few books here and there that are hardly recognized in an international arena?

(Author’s bio: The author, originally from Nepal, is an Assistant Professor of English at South Georgia State College, USA. and also the author of “Sex, Gender, and Disability in Nepal,” “Running from the Dreamland” and a translator of a book called “Shakespear ka Kathaharu.”)