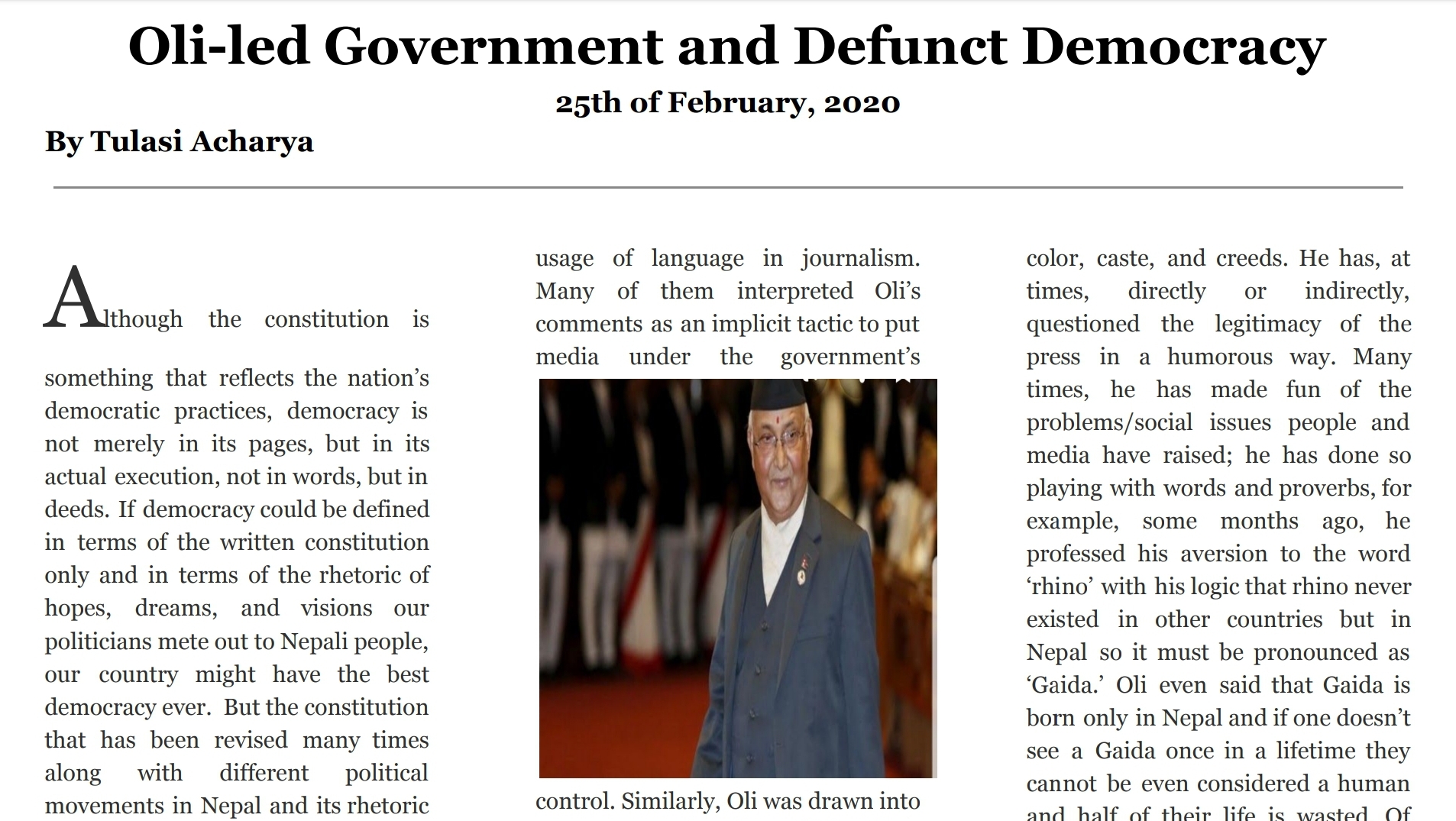 Although the constitution is something that reflects the nation’s democratic practices, democracy is not merely in its pages, but in its actual execution, not in words, but in deeds. If democracy could be defined in terms of the written constitution only and in terms of the rhetoric of hopes, dreams, and visions our politicians mete out to Nepali people, our country might have the best democracy ever.  But the constitution that has been revised many times along with different political movements in Nepal and its rhetoric of hopes becomes only the means of a democratic ladder for demagogues to reach their political and personal goals/agendas. When democracy is in words, but not in deeds, democracy is threatened; development is impeded. In the context of Nepal, implicitly or explicitly, democracy seems defunct and the nation’s development is hindered simultaneously due to the reasons, such as censorship of media, rhetoric of farce, unsafe infrastructure, and patriarchal ethos.

As we have seen and read, the government tries to impose censorship on press freedom in the name of regulating social media. I do not want to go back talking about the censorship before the Oli-led government, but focus on the here and now. Every now and then, the Oli-led government seems to be imposing censorship on the media. Sometime ago, KP Oli blamed journalists for not using respectful language in their news writing even for their father. Oli blamed journalists that they had forgotten civility and decorum; he was actually hinting on the use of ‘timi’ instead of ‘tapai’ in journalistic writing. Different perspectives erupted following Oli’s comments on the usage of language in journalism. Many of them interpreted Oli’s comments as an implicit tactic to put media under the government’s control. Similarly, Oli was drawn into controversy when he said that there were not any editor with ‘a strong heart’ to ‘praise the good work of the government.’ That was another indirect way of lashing out at journalists for not admiring the government but being critical of it. The statement also brought many interpretations regarding the government’s fascist attitudes and egoism and hubris. Now there is another discussion on whether or not to issue a license to a journalist. Many of them have interpreted this idea of the government, in a democratic nation, as oligarchic and a direct interference with the freedom of press. The role of media is to be critical of the government. The democracy and development of the nation is possible only when the government appreciates the role of media without showing a fascist attitude towards it. Media that are fake will perish on their own so the government should not fear the press, but be its friend.

KP Oli has left no stone unturned to launch rhetorical attacks on opponents, or the ones who are critical of the government, who could be anyone from lay people to media persons to people of different race, color, caste, and creeds. He has, at times, directly or indirectly, questioned the legitimacy of the press in a humorous way. Many times, he has made fun of the problems/social issues people and media have raised; he has done so playing with words and pro-verbs, for example, some months ago, he professed his aversion to the word ‘rhino’ with his logic that rhino never existed in other countries but in Nepal so it must be pronounced as ‘Gaida.’ Oli even said that Gaida is born only in Nepal and if one doesn’t see a Gaida once in a lifetime they cannot be even considered a human and half of their life is wasted. Of course, it produced a lot of laughter and many of them realized it was a farce and inaccurate because there are many other African and Asian countries where rhinos do exist. This is just an example to represent how farcical Oli seems to be on many occasions, twisting truth and disseminating inaccurate information and blaming social media for making fun and making fun of those who make fun of him. This rhetoric of farce is another threat to democracy and to the development of the nation.

Democracy cannot be discovered through promising words or the written constitution, but rather through the country’s progress and its infrastructure. Even if we have a two-third majority government for a few years now, we still see a lot of poor infrastructures in the heart of Nepal, i.e. Kathmandu valley where tourists and diplomats all across the world land when they come to visit Nepal. One can see the persisted problems for many years, such as fallen electricity poles, broken and staggering wires on the road, potholed roads and unsafe bunkers and holes in many places, stinking gutters and plastics flowing in all the rivers and so on. There are rarely footpaths for pedestrians and some of them are broken and are in a neglected state. They are dirty and narrow and missing. The whole cityscape looks very damaging and disfigured, let alone the talk of everyone’s access to education, employment, and health. Such scenarios show how danger our democracy is in and how it is threatened.

Egalitarianism in gender is key to democracy. However, our democracy survives alongside a patriarchal ethos. There is less likelihood of a woman to be placed in an active role in our bureaucracy or in an executive body. One of the examples could be the recent incident of the former Deputy Speaker Shiva Maya Tumbahamphe who resigned from her position. She was denied from her wish to be promoted to the house speaker’s position that was empty when Krishna bahadur Mahar was pushed out due to his sex-scandal. Even Tumbahamphe mentioned that even if the monarchy was removed it was difficult to remove patriarchy from bureaucracy and other institutions. Even Sushila karki, former Supreme Court justice, had to resign from her position due to the politicians’ tricks. In democracy, the role of women in bureaucracy is never feared. In democracy women’s role should be promoted for the development of the nation. But, if the bureaucracy or the government fear women’s power, this practice of fear continues projecting patriarchal ethos in all bodies of the government and prevent women from their active roles and positions in different bodies of the government. Such practices threaten democracy, thus, jeopardizing women’s rights to rule and freedom.

This is high time we need the government that addresses such issues discussed above and guarantee that we have democracy not only in words, but also in deeds and ensures that the democracy is not threatened. We can somewhat save and respect democracy by letting media do what its duties are, paying serious attention to the problems of the nation without being farcical and avoiding the rhetoric of farce and lies, addressing unsafe infrastructures, and voicing against gender inequality and patriarchal ethos. E B. White writes that the egalitarianism, civility, sense of freedom and shared purpose are the essence of true democracy.

(Author’s bio: The author is an Assistant Professor of English at South Georgia State College, USA. He is also the author of “Sex, Gender, and Disability in Nepal” and “Running from the Dreamland.”)