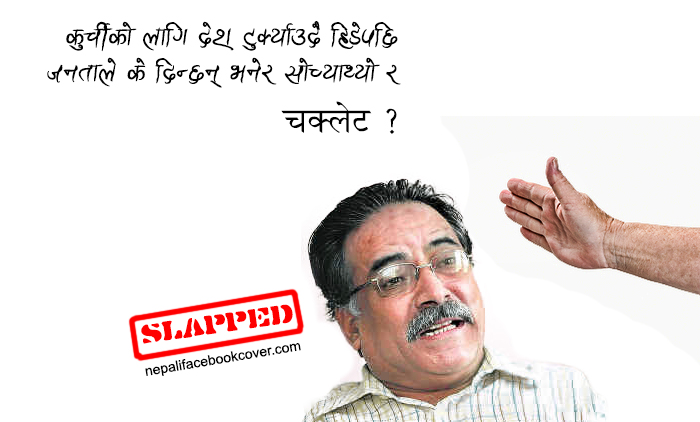 Slapping the face of politicians has produced varied reactions among people for some years now. The recent news of a 22-year-old youth, a son of a former Maoist fighter who had lost his life during the Maoist war, hurling a shoe— metaphorically speaking, a slap—targeting Nepal Communist Party chair Puspa Kamal dahal aka Parchanda has caused a furore among the party loyalists and critics. Some criticize this act of, again metaphorically speaking, slapping the face of politicians, who are responsible and accountable to the people, as a bad practice of venting frustrations and emotions. They loathe this act and view it as an uncivilized way of expressing anger at those in power not meeting people’s expectations as yet. Some extol this act as only the righteous weapon to correct, fix, and handle our Nepali politicians who keep making promising with the people and never come close to keeping their promises. Whatever maybe the case/debate, although the slap (I consider hurling a shoe or some sort of attack, directly or indirectly, as a slap on the face of the politician) is not the proper way of awakening our politicians, politicians should interpret such slaps as an opportunity for themselves to review their promises with people, as a course corrector, and as a realization of their words and lack of deeds have consequences.

This is not a first time experience for Prachanda. Throwing a shoe him is not new or unusual. Earlier on the 16th of November, 2012, Prachanda was slapped by his former Maoist fighter, Padam Kuwar from Baglung at a tea reception in Bhirkuti Mandap. Not only him, the list of other politicians who have been attacked by their own party cadres in public is quite lengthy, such as Sushil Koirala and Jhalanath Khanal who was slapped by Devi Prasad Regmi at a function in Sunsari. When asked, the ones who launched such slaps on the face of these politicians say that there is a lack of political progress and only unfulfilled promises with people empty promises that benefit politicians’ own personal ambitions. According to them, even half of the promises have never been materialized. They seem frustrated and hopeless, and a slap seems to be an evocation of their frustration and hopelessness and revolt.

When Devi Prasad Regmi slapped Jhalanath Khanal, despite some criticisms of his attack, many people supported him as the real hero of the nation. People even set up a Facebook site in praise of Regmi’s act. People poured in emotions of approval that said Regmi was right for slapping Khanal. It looked as if the act of Regmi reflected the emotions of the majority of Nepali people. Later, Khanal, with his glowing face, even cracked a joke saying Regmi’s slap made him the 34th Prime Minister of Nepal.

There are not only Nepali leaders who have been slapped, but also other Indian leaders, for example, Arvind Kejariwal, the leader of the Aam Aadmi Party (AAP) who was slapped by a rickshaw driver who approached to place a garland around Kejariwal’s neck and slapped on Kejariwal’s face. The same leader has been slapped many times.

What is a slap then? A Cambridge dictionary meaning of “slap” is “a quick hit with the flat part of the hand or other flat object.”  A symbolic meaning of a slap can also be interpreted as the reminder of someone’s lack of respect or appreciation because they haven’t done enough or their actions are out of line, because of their arrogance. I have experienced many slaps from my father when I didn’t obey his order or failed to keep the promises I made with him or made a mistake. Then, I dreamed of being slapped by my father, and my mother interpreted it: if someone dreams of being slapped, this may hint at a situation that leaves them guilty or feeling remorse because they were careless or have betrayed someone. And, my father encouraged me not make mistakes and listen to my father. She said that if I toke a slap of my father on my face positively, it would increase love between us.

A spiritual meaning of a slap is defined as a course corrector. If someone avoid mistakes or wrong doings and correct themselves, they are supposed have avoided slaps. With that said, a slap can also be a reminder of an epiphany, revelation, and insight.  In his book “Symbolic insult in diplomacy: A subtle game of diplomatic slap,” Alisher Faizullaev writes that “A slap, even a physical one, is generally regarded as a symbolic gesture rather than a serious physical assault and the injury in a slap is generally more symbolic than physical.” According to faizullaey, the slap is not supposed to break the relationship between the one who slapped and the one who is slapped, the one who insulted and the one who is insulted, but rather it should build a meaningful relationship instead of fueling aggression between them. Slap, the onomatopoeia sound of the word though it may sound aggressive, has softness in its nature. A slap, symbolically speaking, our politicians have received can be deemed as a reminder of their carelessness and betrayal on people with whom they promised, and they hardly materialized their words in deeds. A slap can also be a “course corrector” like I said or an epiphany. Thus, a slap should rather build a relationship, filling the gap between the politicians and people, the rulers and the ruled.

Interestingly, there are some advantages of a slap too. It rejuvenates the skin and brings glow to the face and keeps it freshly moisturized. This is also one of the messaging techniques: slapping and tapping on face.  Such techniques they say, activate muscles in the region and boosts blood flow, stimulates the production of collagen, improves skin’s quality. We have also frequently observed on screen slap scenes in many Hollywood movies, such as “What Ever Happened to Baby Jane?” “Titanic,” or “the Lion King.” There are other movies where someone gets slapped on the butt, such as “Sympathy for Mr. Vengeance,” “American Hustle,” “The Way Way Back,” “Blue Jasmine” and so on. Even we have slap scenes in both Hindi and Nepali movies, such as “Dosti Todnewaali” and “Policewaali” and “Chha Ekan Chh,” and “Purano Dunga” respectively.

A slap is a “Thappad” in Hindi or “Jhappad” in Nepali. Nepali and Indian society have so much in common, mainly culturally. Like I said, parents scold their children saying “talai thappad laaideum?” meaning should I slap you? Just the statement by itself has a powerful effect on their children, encouraging them to behave or correct themselves. A slap makes sense as if Nepali society needed the slap to fix the mistakes that have been made, to have a realization.

Hope this slap, physical or symbolic, at our politicians will become a reminder of their mistakes they have made, their arrogance, and their promises and turn out to be a “course corrector” or a realization and be a better leader who can fulfill people’s aspirations. Hope the slap will be a real “thappad” or “Jhappad” for them to behave well.

Bio: The author is Assistant Professor of English at South Georgia State College, USA. He is also the author of “Sex, Gender, and Disability in Nepal” and “Running from the Dreamland”

One thought on “Opinion: Symbolic Slap”