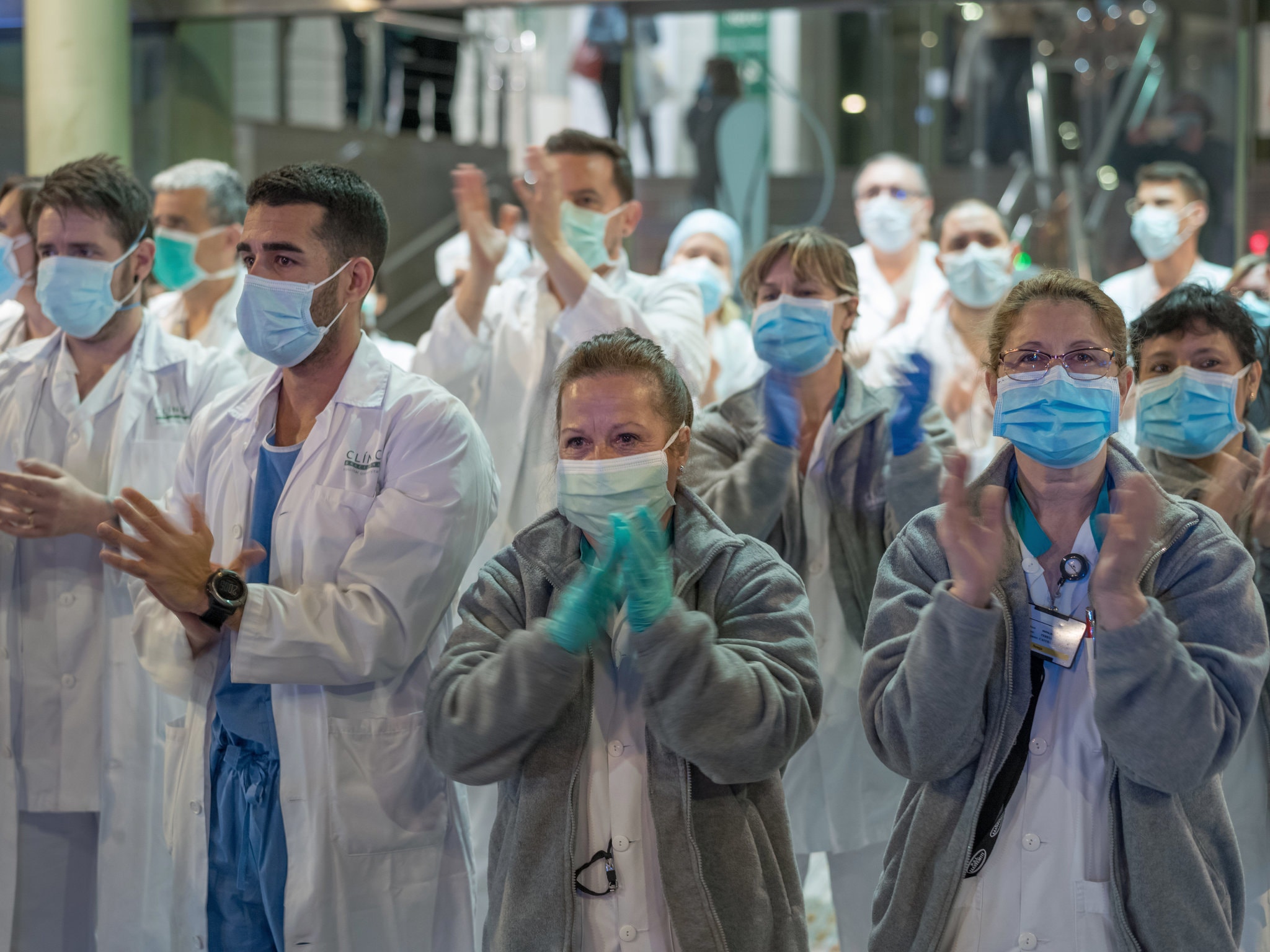 Ritchie Torres, 32, a New York City councilman from the Bronx, first had nothing more than a “general sickly feeling.” Then came a bad headache. He felt terrible. But for Torres, the worst effects of covid-19 so far have been mental: “It is psychologically unsettling to know I am carrying a virus that could harm my loved ones.”

The Rev. Jadon Hartsuff, 42, an Episcopal priest in Washington, D.C., felt drained after a Sunday service on Feb. 23. He took a nap. No big deal — the service can be tiring. The next day at the gym, his muscles ached. He became fatigued, feverish, slightly dizzy. “I kept telling people I felt spongy,” he recalls. “Like a kitchen sponge.”

Mike Saag, 64, an infectious disease doctor in Alabama, developed a cough, like a smoker’s hack. He was bone-tired, his mind foggy. About five days in, the misery intensified. “This is not something anybody wants to go through,” he said Saturday. “I implore everyone to stay at home!”

These stories were offered in recent days by people in the United States who now know the new coronavirus and the disease it causes intimately. In sharing their experiences, they are helping to demystify this alarming contagion.

Covid-19 can be a severe illness, even deadly. But it varies from person to person, and most people with a confirmed infection do not require hospitalization.

It can induce intense fatigue and trigger a recurring cough and intermittent fever. This is a slow-developing illness, and it lingers, the whole process typically playing out in weeks rather than days.

Sign up for our Coronavirus Updates newsletter to track the outbreak. All stories linked in the newsletter are free to access.

Patients with covid-19 report a psychological toll. This disease is unfamiliar. It’s a pandemic virus that has alarmed the entire planet. A natural reaction is anxiety.

Jim, a 34-year-old from Long Island who asked that his full name be withheld, had mild symptoms for several days and then abruptly developed shortness of breath, fever and chest pains.

“The fear is real,” he said. “It’s impossible not to be scared at times that it’s just going to take this insane turn into uncontrollably bad.”

Saag, the doctor, teaches at the University of Alabama at Birmingham and fully understands the biological processes that take place when a virus invades the body. He knows, for example, that his immune system generates the symptoms — things like fever. He became sick after a long drive from the Northeast back to Alabama, and on Monday night, he experienced rigors — his body shaking uncontrollably.

“It was my immune system saying, ‘Hey, let’s fight this sucker off.’ ”

Still, even with his medical background, he had to suppress the natural fear any person would feel. His advice to other covid-19 victims: “Stay calm. Monitor yourself. The number one thing to keep an eye on is breathing. If it becomes difficult to breathe, you should really get to a facility.”

As for fear and anxiety, “We got a disease that’s kind of scary, and anxiety is part of the equation. That’s why I started with ‘stay calm.’ ”

Torres, the youngest member of the New York City Council, tested positive for the coronavirus Monday after his chief of staff tested positive the previous weekend. Torres is under quarantine at his Bronx apartment. Busy with his job on the council and his campaign for the 15th congressional district’s open seat, he was unable to stockpile supplies as the contagion hit the city. He has been asking deliverers to drop off his meals at a safe distance.

“To feel so helplessly dependent is a painful adjustment for me,” he said. “The virus preys upon our need to be human, our need for social and physical affection. I struggle with depression, and the virus has left me struggling even more so.”

He added, “If you are young and a millennial and healthy, it is tempting to feel a false sense of security. That delusion could not be farther from the truth.”

Mark and Jerri Jorgensen and their friend Carl Goldman were among the passengers on the ill-fated voyage of the Diamond Princess. Jerri, 65, a former high school volleyball and track coach from St. George, Utah, tested positive after the ship docked in Yokohama, Japan, and was placed in quarantine. Authorities took her off the ship and placed her in isolation, but she never felt any symptoms.

“I never had a sore throat or headache or anything,” she said. She stayed in a hospital for 14 days until she tested negative twice. She spent her days doing Pilates via FaceTime with friends back home at 1 a.m. in the morning Japan time.

“I would do planks, push-ups and put my headphones on, and I’d have really good ’80s rock ’n roll and just dance in the room,” she recalled.

Goldman, 67, who owns a radio station in Santa Clarita, Calif., tested negative while on the ship, but on the State Department-sponsored evacuation flight home, he fell asleep and woke up with a 103-degree fever. He was quickly quarantined in the back of the plane with plastic sheeting between him and the other passengers. By the time they landed in the States about eight hours later, his fever was gone.

“I had no headache, no sore throat, no sneezing, no dripping of the nose, no body aches. Just a dry cough,” he said. He had some shortness of breath for three or four days while walking around or talking, but nothing that required treatment. The cough persisted for two weeks.

He was taken to the University of Nebraska for treatment. He and 12 other covid-19 patients were isolated from one another, but they had a group “town hall” conference call each day with the doctors.

Goldman, who left on Monday, was one of the last to be discharged.

“We would cheer when they finally tested someone negative,” he said.

He was treated with a bit of ibuprofen at the beginning and told to drink a lot of Gatorade. (“The white blue is the bomb, and stay away from grape — it’s nasty.”)

Mark Jorgensen, 55, tested positive while in quarantine on Feb. 22.

“When they told me, I felt like, ‘Are you kidding me?’ I felt fine,” he recalled. They flew him to a hospital in Salt Lake City, where he continued to feel fine the whole time.

“It was kind of bizarre. I was perfectly healthy, but I was taking up this biocontainment unit, and they were all coming in hazmat suits and this whole bit,” he said.

Mark is a two-time kidney transplant recipient taking immunosuppressants. As of this week, he said, he was still testing positive for the coronavirus, but the hospital released him to home quarantine.

A Syracuse, N.Y., woman in her 20s, who spoke to The Post on the condition of anonymity, said her first symptom was shortness of breath. She went shopping with her mother in New York City on Saturday and began to cough and feel tired, as though she’d just finished a sprint.

“I feel like, because I’m so young my symptoms weren’t that big — but it definitely caught me off guard,” she said. “I haven’t felt anything like it. I’ve never had the flu before.”

On Sunday, in New York City, an urgent care facility declined to give her a test. “I got tremendously worse,” she said. Her temperature rose to 101, along with a headache that she described as “the worst part of my entire experience.”

Her mother drove her to Syracuse, in Upstate New York, where Monday morning a physician’s office agreed to give her a test. The clinicians directed her through the back of the building, gave her a mask and had her wait in a disused room.

When a doctor in protective gear entered, the other clinicians stood outside the door. “They were kind of freaking out because they’re like, oh my God, it’s in Syracuse!” the woman said.

When the test results came back positive, the young woman became the third confirmed coronavirus case in New York’s Onondaga County. The health commissioner there ordered the family to quarantine at home.

So you’ve been asked to self-quarantine. Here’s what you should know.

Hartsuff, the priest, did not realize he had covid-19 until news broke on March 8 that a fellow priest in Washington, the Rev. Timothy Cole, had tested positive. They’d seen each other at a conference more than two weeks earlier. Hartsuff quickly informed his church that he’d been sick and was getting a test. The positive result came back three days later.

He doesn’t know whether he transmitted the infection to anyone at his church, but he’s feeling guilty that he didn’t self-quarantine earlier.

“I wasn’t staying home, I wasn’t staying away from church, and I have a lot of guilt around that,” he said by phone from his apartment, where he is feeling much better, symptom-free, but remains in self-quarantine.

Now more than two weeks after his symptoms began, Jim from Long Island is still having difficulty breathing. He’s gone to urgent care twice and has been in communication with the health department but has been told he should just treat himself at home. He’s been living in the guest room downstairs while his wife and two children live upstairs. They leave him food at the door.

“I felt like I was raising the alarm everywhere I went, saying, ‘I think I have this!’ and being largely ignored,” he said.

Alison McGrath Howard, a Washington clinical psychologist with covid-19, said of her illness, “I’ve never had anything like this. The symptoms feel unfamiliar to me, and therefore I don’t know how to mentally make sense of them.”

The symptoms come and go. She feels better — for a while.

“And then I take my dog outside and feel like I’m going to fall down,” she said. “And my fever is gone, and then it comes back. And while I have been sicker with other things like bronchitis or stomach viruses or really bad colds, this feels like a constant fatigue. It’s the weirdest thing.”

Anne Kornblut, 47, a Facebook executive and former reporter and editor for The Post, suddenly developed a headache March 11, not long after she returned to her home in California after a trip to New York City.

Her symptoms came and went. At times, she felt just “under the weather.” Although she didn’t think she had covid-19, she managed to get a test and was on the treadmill last Sunday, feeling better, when her doctor called and said she was positive.

She posted her story on Facebook, and described the uncertainty that everyone is facing, including health officials: “The health department called to inform me to stay away from everyone, including my children. So who should take care of them if my husband tests positive, too? ‘We haven’t had that scenario yet,’ the public health nurse said, offering to call me back.”

By late Friday, her fever had spiked again, and she had another terrible headache. And her husband had tested positive.