How Doctors Live with the Risks of the Coronavirus 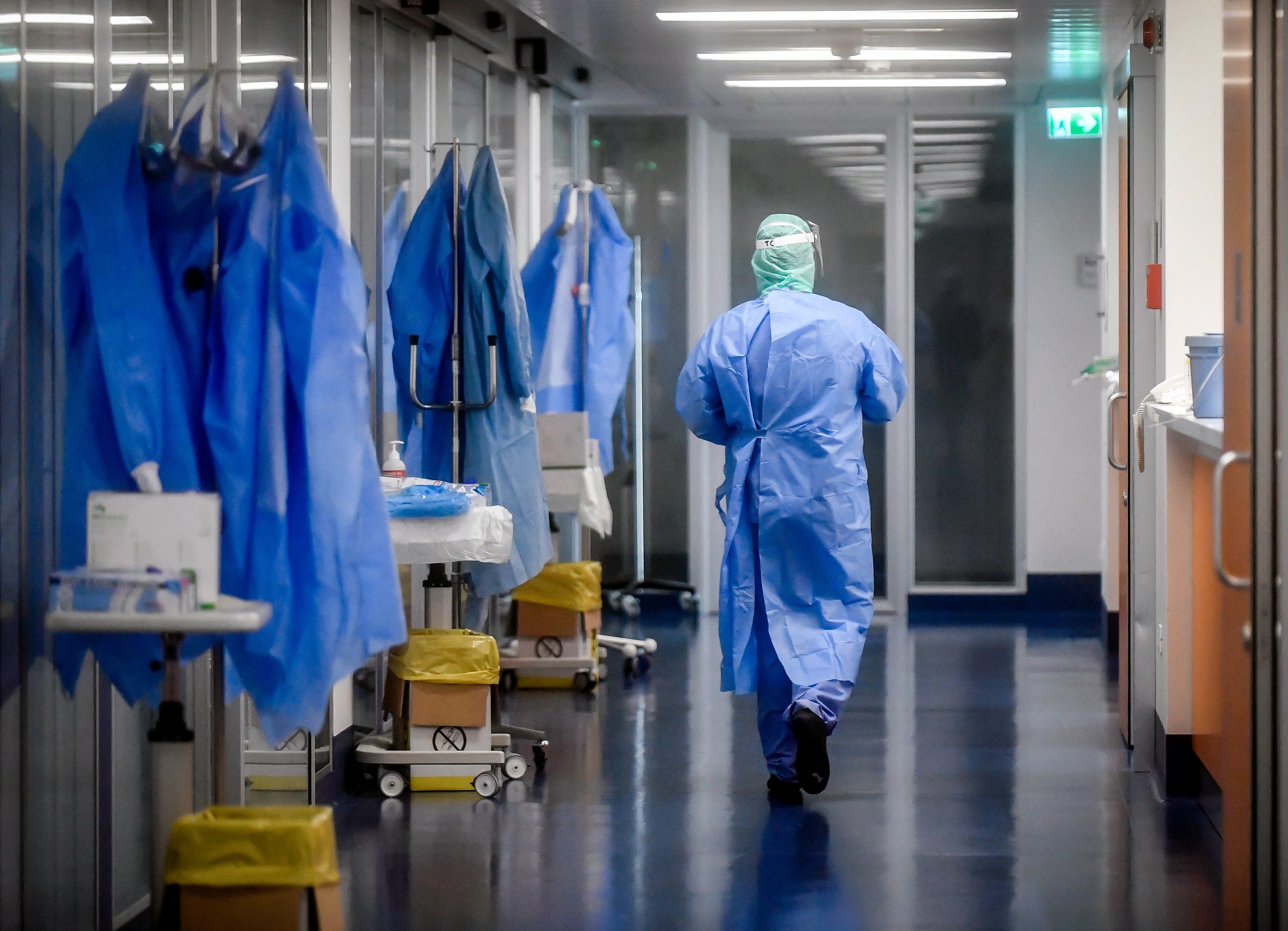 Reports from northern Italy often lighten the news, but lately they have leadened it. Last Saturday, The New England Journal of Medicine published an alarmed dispatch from a group of doctors at the Papa Giovanni XXIII hospital, in Bergamo. “Our own hospital is highly contaminated, and we are far beyond the tipping point,” Dr. Mirco Nacoti and his twelve co-authors wrote. They were concerned not just about the condition of their hospital but about the safety of hospitals in general—about the role that the medical system could play, under extreme pressure, in spreading the new coronavirus.

“We are learning that hospitals might be the main covid-19 carriers, as they are rapidly populated by infected patients, facilitating transmission to uninfected patients,” the Bergamo doctors wrote. The situation in their own hospital was bad, and that of outlying hospitals in the region was worse: patients were lying on mattresses on the floor, and medications and oxygen were unavailable. Cemeteries were overwhelmed, “which will create another public health problem.” In the midst of an epidemic, the physicians argued, the familiar model of patient-centered care in a hospital could no longer do the job; an entirely different model, which they called “community-centered care,” was needed, in which more health care would be delivered outside of the hospital, through community surveillance, home care, and mobile clinics. If the first wave of concern about hospitals in the pandemic has been about their capacity to absorb the coming surge of patients, this report hinted at a second, in which the focus might be on how to prevent the hospitals, and the people who worked there, from transmitting the virus themselves.

Over the past few days, the news from American hospitals on the front lines of the pandemic has emphasized the lack of personal protective equipment. There aren’t nearly enough swabs, which in a dark twist turned out to be produced mainly in northern Italy. There also aren’t enough simple surgical masks, or the more protective N95 masks, or gowns. As the number of cases rose into the tens of thousands last week, hospitals began issuing open calls to help supply the necessary gear. Some of these efforts had a slightly whimsical flavor, such as the message on the website of Providence St. Joseph Health, which operates fifty-one hospitals, mostly in the West: “For those in the Seattle area with a willing heart, the ability to sew, and a sewing machine, we have an opportunity to make masks now.” Others were more pragmatic. Peter Slavin, the president of Massachusetts General Hospital, spoke with NBC’s Boston affiliate to try to galvanize a grassroots development program for N95 masks. “We have vast numbers of 3-D printers in this country. The formula for making these masks is available online for free,” Slavin said. I spoke with Slavin on Monday morning, and he told me that he wasn’t sure whether the right historical analogy was “the Manhattan Project, or the Marshall Plan, or Dunkirk, but we need to unleash the imaginative energy of people around the country to solve this problem.”

The public has answered these pleas, in volume. All kinds of entities, large and tiny, have been devoting themselves to the gown- and mask-making cause. “I mostly talk about movies on here,” a screenwriter and podcaster named Jeffrey Zhang wrote on Twitter on Friday, “but here goes. We are currently pivoting our factory to solely make surgical masks and other medical garments in short supply. We can make 2 million masks a day, and are looking to help in any way possible.” The head of R. & D. for a publicly traded medical-supply company in Silicon Valley sent me a direct message saying that he was cold-calling ventilator companies, offering to help with production, and was looking for leads. (I’d written a piece last week about how doctors were navigating ventilator limits.) A guy in my fantasy basketball league made a similar plea on the league message board—he was going to start manufacturing personal protective equipment, and he needed contacts.

Slavin said that so many people had responded to his call for P.P.E. manufacturers that Mass General had set up a new team to handle all of them. Every high school seemed to have a 3-D printer, and every high-school science club seemed to want to help. Slavin said, “Managing this outpouring of support has, ironically, strained the system even further.” He sounded relaxed, capable of noticing ironies, which may have been professional habit but was itself reassuring. Acquiring more personal protective equipment was part of a larger effort, he said, to help protect the staff and keep the hospital from becoming a vector for transmission. Units are being established for covid-19 patients, as they are at hospitals across the country; all staff are required to wear surgical masks at all times and some entrances to the hospital have been closed, so that anyone entering can be channelled past hand-hygiene stations and put on a mask. The intent of all these changes is to provide an inward-facing form of protection, to insulate the staff against getting sick, but also an outward-facing one, to insulate the public. Slavin said, “Not only do we want to keep our health-care workers safe and healthy for their own health, we also don’t want them infecting patients.”

The other day, another article in The New England Journal of Medicine caught my eye—an essay written by a young emergency-medicine physician in San Francisco named Christian Rose, who mentioned that in Wuhan, forty-one per cent of covid-19 transmissions had taken place within hospitals. Rose quoted a W.H.O. official named Mike Ryan, who said, “We’ve always said that the real point of entry for a coronavirus is a busy emergency room.” Rose’s essay centered on his own realization that, by helping patients sick with covid-19, he also made it more likely that he would end up transmitting the virus himself. Rose lives with his wife and mother-in-law, who has a chronic lung condition, making her especially vulnerable to covid-19. Once Rose was potentially exposed to the virus, at Kaiser Permanente’s San Francisco hospital, he stayed with a colleague until his wife set up a basement isolation room. Should he inadvertently infect his mother-in-law, Rose wrote, “Her lung reserve is so low that she would most likely wind up on a mechanical respirator in an intensive-care unit, probably on the thirteenth floor at U.C.S.F., where I trained several years ago. . . . It is not unlikely that she would die, that this invisible invader, this microscopic enemy would be the end of her story. All this just because I came home.”

I reached Rose, who has a mustache and a pensive manner, at home last week, after he had returned from a night shift at Kaiser Permanente. The hospital wasn’t yet overwhelmed, he said, but there were already some logistical tensions: there were seventeen separate instructions for putting on covid-protective gear, Rose said, and eleven separate instructions for taking them off. “Last night, I had a very sick patient who needed C.P.R., and I spent almost four minutes, like two rounds of C.P.R., getting the stuff brought to me so I could go in the room,” he said. The guidance about when to use protective gear and when to avoid doing so could be bewildering and stressful. “Humans are fallible,” Rose said. “You need to not say, ‘Hey, maybe a N95 mask works, maybe it doesn’t, but it doesn’t matter because we don’t have enough anyway, but if you have one maybe re-use it.’ You should just tell them, ‘We have them. Here’s a mask. Use it. And please don’t touch your eyes.’ ”

Early on in the crisis, Rose told me, he’d noticed that his colleagues were feeling somewhat removed from their friends and family outside of the hospital, because they were experiencing the stress and risk of the crisis before anyone else. “What to me was weird was noticing that a lot of us felt really alone,” Rose said. “It’s just this lost feeling that all of my emergency colleagues—the nurses, the techs—feel, where we know how bad it can be, but society doesn’t feel it yet.” The longer the hospitals are preoccupied with the covid-19 pandemic, of course, the more medical risk the general population will absorb. Right now procedures and preventative scans are being cancelled. Postpone a chemotherapy session, and the risk that your cancer might metastasize rises; postpone it twice, and then three times, and the risk rises again and again. By making the hospitals ever so slightly less safe, the P.P.E. crisis subtly increases the risk to everyone of a sick person visiting the hospital, in the same way that a side effect might elevate the risk of prescribing a drug.

That gap between the doctors and the public still exists, Rose said, but it has closed somewhat. Perhaps, eventually, the public would undergo the same psychological adjustments that health-care providers had. “We know that people change the more exposure they have to risk—so people will feel really stressed out at first and then it normalizes.” Rose said, “Your brain just changes the way you live with that. And all of a sudden you start to normalize things that are really abnormal.” Rose sounded grateful for the past couple of weeks, when covid-19 patients had trickled in, and he and his colleagues had had the chance to practice the seventeen steps for donning protective gear, as well as more consequential maneuvers, to reduce the risk that they might spread the virus. “It’s like everyone feels on the roller coaster before you go over the drop,” Rose said. “It’s, like, you’re about ready.”

Benjamin Wallace-Wells began contributing to The New Yorker in 2006 and joined the magazine as a staff writer in 2015. He writes mainly about American politics and society.

(Copied from The New Yorker: https://www.newyorker.com/news/news-desk/how-doctors-live-with-the-risks-of-the-coronavirus)