Charles Shobraj out of lockup during lockdown? 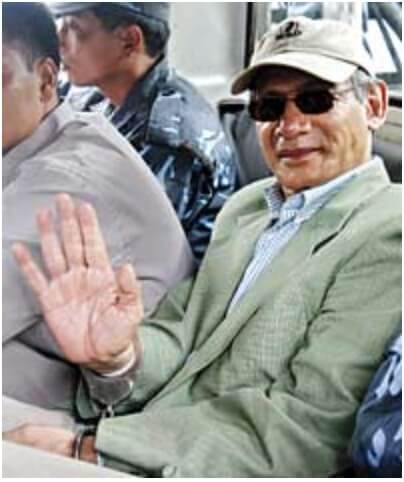 Among a list of 13 elderly prisoners that Nepal’s jail administration has moved forward is one name that has taken everyone by surprise: Charles Shobraj. It looks like Nepal’s COVID-19 lockdown will see Shobraj freed from lockup after 16 years in jail in Nepal.

If it goes through, the 75-year-old French-Indian-Vietnamese serial killer accused of leaving a trail of at least 12 murders across Asia in the 1970s, and imprisoned at least three times, will be released from Kathmandu’s Central Jail.

On 20 March Nepal’s Supreme Court responded positively to a move by Attorney General Agni Kharel and sent the file to the Home Ministry to release 13 elderly prisoners. Central Jail’s Laxmi Baskota confirmed that Shobraj’s name is on the list. If the Home Ministry approves the release of all the prisoners, the man named as The Serpent may soon be free.

“It is up to the Home Ministry to make the final decision, but we are sending the list to them,” said the director general of the Jail Administration Department, Pradip Raj Kandel.

Attorney General Kharel has cited a 2015 law that senior citizens who are serving jail time could be released.

Shobhraj had got his lawyer Shakuntala Thapa to file a case in the Supreme Court asking for his release citing that law. However, the law only says that prisoners between 70-75 can have their sentences reduced by 50%, and it is applicable only to Nepali citizens.

Two years ago, the Appeals Court had issued the government a show cause notice asking why Shobhraj should continue to be in jail. In 2015, the Bhaktapur District Court had sentenced Shobhraj to life imprisonment for the murder of a Canadian and American tourist. Shobraj’s lawyers then filed an appeal.

In 1975 police found the body of a woman with her face burnt in a ditch by the Arnico Highway in Bhaktapur. Three days later, they found the naked and half-burnt body of another Caucasian woman. The two were identified as Canadian, Laurent Carrière, and an American, Connie Bronzich.

Shobraj was born in Saigon in 1944 to an Indian father and a Vietnamese mother and later became a French citizen. In the 1970s, at the height of the hippie era, he roamed across the Asian backpacker circuit allegedly robbing and killing at least 12 unsuspecting budget travellers for which he was nicknamed ‘The Bikini Killer’, or ‘The Serpent’. Among his victims in Nepal were the two young tourists, an American and Canadian, who were killed in 1975.

He was caught in India for a series of murders there, and was imprisoned in Delhi’s Tihar Jail. But he managed to escape in 1986 after spiking the drinks of his guards, and was caught again in Goa and sent back to jail to be set free in 1997 after serving his term.

Shobraj came to Nepal in 2003 where he thought he would be more anonymous, but one night he was recognised by a reporter of The Himalayan Times in a Thamel bar and the paper carried an expose about him. Police quickly arrested him and charged him in Bhaktapur for the murder of the American and Canadian backpackers in 1975.

A Netflix/BBC eight-part series titled The Serpentis supposed to be released this year. It recounts Shobraj’s rampage across Pakistan, India, Nepal and Pakistan where he robbed and travelled with the passport of his victims.

Shobhraj was tried and has been imprisoned in the Central Jail in Kathmandu for the past 16 years, from where he is alleged to have tried to get a contract killer to murder a businessman inmate. He also married his Nepali lawyer’s 24-year-old daughter in a jail ceremony when he himself was 70.

Two years ago, he got a heart bypass surgery performed by Nepali surgeon Raamesh Koirala in a Kathmandu hospital. Koirala later tweeted a photograph of himself with Shobraj and said: ‘Yes, he has a heart and I just fixed the valves inside.’

Shobhraj filed a case for release because by Nepali law prisoners can be released after they turn 70. But the release had been snagged until the coronavirus pandemic swept the world, and put the whole of Nepal in a lockdown this week. (Copied from Nepali Times: The link is here- https://www.nepalitimes.com/latest/charles-shobraj-out-of-lockup-during-lockdown/)