Amid our fear, we’re rediscovering utopian hopes of a connected world 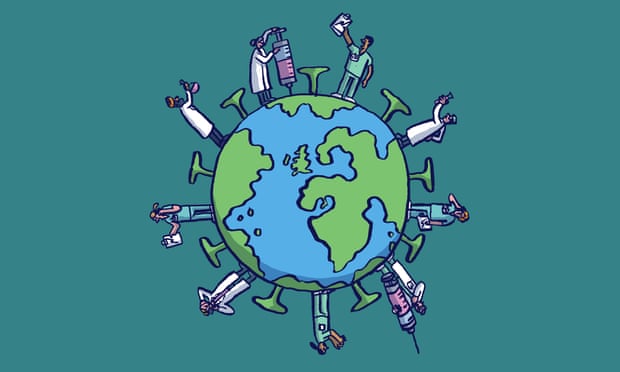 To each their own narrative or metaphor. If this feels like the blitz spirit to you, all well and good. Others find it helps to imagine a world recast through virtual networks.

But what it amounts to is this: there is such a thing as society and we are all interdependent. And if it sometimes takes a grave crisis to remind ourselves of these truths, then this moment may well be historic for the possibilities of hope as well as for all the tragedy and turmoil.

Nearly 200 years ago, the French political theorist Alexis de Tocqueville wrote about the power we have been re-experiencing over the past few weeks: “In democratic countries knowledge of how to combine is the mother of all other forms of knowledge; on its progress depends that of all the others.”

The BBC has been doing what it does best: providing reliable and trustworthy information to a huge audience

At least three forms of combination have blossomed in the present crisis: the NHS, the BBC and the internet itself.

It is difficult to see how the NHS will not emerge stronger from this pandemic, however traumatic and stressful the coming months will be. We get the service we pay for. It would take an unusually obtuse future government to be blind to the signals sent by three quarters of a million volunteers or the echoing applause of people across the nation in the past few days.

The BBC is having its moment, too. Only a month ago it seemed on the ropes – the bizarre target of the obsessional figure who sits at the prime minister’s right hand. Dominic Cummings had long nursed a loathing for the corporation, with his thinktank willing its demise more than 15 years ago. The aim was to replace it with a “Fox News equivalent”, along with talk-radio shows and bloggers “to shift the centre of gravity”.

Today such aspirations look like lunacy, as they did even then. Fox News has shown its true colours during the Covid-19 emergency, parroting the wildly erratic line from an increasingly dangerously deluded White House. Fox is these days less a news company than an oligarchically owned state broadcaster.

The BBC, meanwhile, has been doing what it does best: providing reliable and trustworthy information to a huge audience – both broadcast and online, both young and old. On any surveys of trust it towers over other news organisations as well as other institutions in society.

Again, it is difficult to imagine any sane administration wanting to diminish the national, international and local reach of the BBC for the foreseeable future – far less hand over our national spine of communication and conversation to the Murdoch family and a bunch of talk-radio hosts.

Many were convinced the original dream of the world wide web was dead and buried. Maybe, today, not so much

Three and a half years ago we’d apparently had enough of experts. They seem to be back. More understandably, many were convinced the original dream of the world wide web was dead and buried. Maybe, today, not so much.

In our self-isolation, many of us have rediscovered some of the things that inspired such cause for hope when the web first demonstrated the power of combination. How many of us have relied on it for friends, food, family, education, health, fitness, worship, ideas, culture, ideas and knowledge over the past week or more?

All these things seemed within our grasp. And then a kind of darkness stole over that shared space and we gradually began to give up on what, we soon convinced ourselves, had only ever been a lovely dream.

Well, maybe. And of course – unlike the NHS or the BBC – there is a genuine malign aspect to the way in which so many people have twisted the web’s capabilities into an engine of hatred, misinformation and bleakness. That will not wither away: there is a different kind of virality in play there.

But, in the end, the internet simply amplifies who we are. As the New York academic Clay Shirky wrote in his 2010 book, Cognitive Surplus: “Human character is the essential component of our sociable and generous behaviours, even when coordinated with high-tech tools. Interpretations of those behaviours that focus on the technology miss the point: technology enables those behaviours, but it doesn’t cause them.”

Surveys of trust since Covid-19 began to bite show people re-evaluating whom to believe. They, overwhelmingly, trust the NHS and – still – the BBC. They absolutely trust experts. They rely on mainstream news organisations while proclaiming low levels of trust in journalists as a category. They are inclined to trust their own employer – but not as much as they trust “a person like yourself”.

In Shirky’s 10-year-old analysis, trust in the world today is dependent on perceptions of motive. Why is this person telling me this? Is it for money, power or some kind of personal or political advantage? Or is it out of genuine disinterest? A respect for evidence? A feeling, in Shirky’s words, that “by treating one another well (fairly, if not always nicely) we can create environments where the group can do more than the individuals could on their own”.

There will be much stress and sorrow in the months ahead. But a kind of better future feels quite tangible. Love, humanity and combination may yet win. (copied from The Guardian)

Writer’s bio: Alan Rusbridger chairs the Reuters Institute for the Study of Journalism and is a senior adviser to WATATAWA communications consultancy