Here’s How I Made It Through COVID-19 ICU 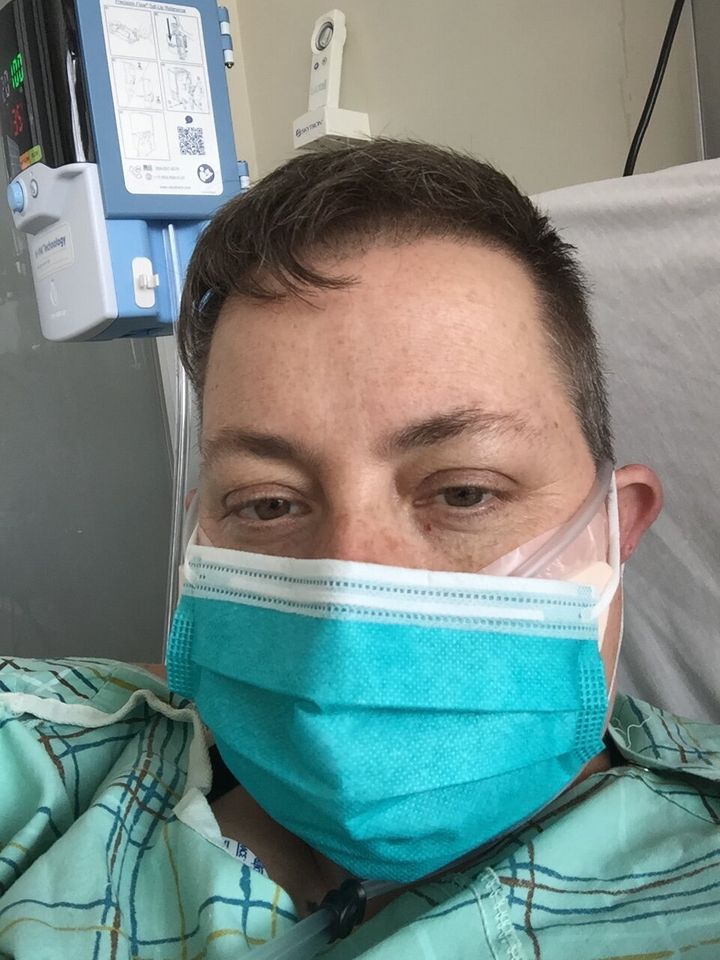 I live with two unrelated roommates even though I’m 51 years old, I have multiple day jobs (nursing, and working with high school students) that support my art (performing comedy), and until two weeks ago I hated New York Gov. Andrew Cuomo for a stunning array of well-thought-out political reasons but now I’m not sure whether I’m in love with him or want him to be my dad.

In other words, I’m a typical New Yorker.

Despite my 15-plus years in the five boroughs, there are days when my Wisconsin-born soul unexpectedly ― and quite inconveniently I might add ― intrudes on my Brooklyn life. Like last week, when I found myself leaning against a stretcher gasping for breath in a local pediatric ER turned COVID-19 ER. I felt not just the substantial terror of “Oh shit, this is serious” but also the embarrassment of “Can we please not make quite such a big deal about this? And also, “P.S., can you please quit looking at me?”

But I’d had a bad cough for a few days and then had grown steadily more short of breath. I hadn’t initially suspected COVID-19 since I hadn’t really had a fever. But red-faced with the embarrassment of, OMG, needing something and blue-lipped with lack of oxygen, I headed to the Manhattan hospital where I’ve received extremely competent medical care in the past.

I walked in with a red flannel button-up shirt tied midlevel around my face. If any of the initial assessment staffers thought I looked like a middle-aged genderqueer version of an Old West bank robber, they were kind enough not to share their impression. Instead, the triage nurse said dryly, “I applaud your efforts,” handed me an actual disposable mask that hadn’t been part of anyone’s wardrobe in the last hour, and took my vitals.

For a moment, it seemed like a regular Thursday morning in any emergency room. But then a tech clad head to toe in plastic protective gear called my name and motioned me to follow her. We stepped through a heavy door.

I tried to keep my eyes on my own paper as the tech walked me past row after row of beds separated by opaque plastic walls that had been pulled out from freestanding columns like portable movie screens turned sideways. Each makeshift cubicle was stuffed with various pieces of equipment, a patient who was trying very hard to breathe, and one or more staff members in their astronaut-esque gear.

And then I was in my own room, leaning against a stretcher, with an ER doc ― who looked as exhausted as if she’d just completed the New York City Marathon even though it was not yet 9 a.m. ― staring intently at me.

“Ah … yes,” I said, trying to lighten the mood a little although my comic timing was being annoyingly hampered by the whole gasping-for-air business. “We … ah … share … this concern.”

Tired and Kind Doctor (whose name I cannot remember despite having inquired about it three times) asked if I would be OK with being intubated. I can remember thinking that it was a weird time to have a theoretical conversation about such a serious matter. What was she doing, taking a survey? But then I noticed the gathering of health care providers outside the room, suiting up in their protective gear and circling like scrub-clad extraordinarily helpful jackals. This was alarming.

I also suddenly realized that no one had ever asked for my insurance info.

This scared me even more.

I was lucky: I responded to non-invasive efforts, so the Helpful Jackals moved on to address the dozens of similar situations I heard going on around me.

No visitors were allowed in the area of the ER set aside for patients whose symptoms placed them squarely in the “presumed COVID-19” category. I messaged folks to let them know where I was, asking my sister and my girlfriend to pass along the info since I’d forgotten an extra phone battery. After I shut off my cellphone, I had some time to think.

I thought about my girlfriend’s smile.

I thought about how my students were dealing with the pandemic, even ― or perhaps especially ― the kid who makes the most fun of my tattoos.

I thought about my 86-year-old mother who has been on chemo for a rare blood disorder nearly five years and how pissed off she would be if I died before her.

And how she would smile if she knew that’s what I was worried about.

And then without other distractions and surrounded by the alarming sounds of respiratory distress (including my own), I could no longer not think about what I was trying not to think about.

I’ve been a nurse for more than two decades but the vast majority of my experience managing severe respiratory distress has been in my personal rather than professional life.

In 2010, my then-partner Cheryl was diagnosed with Hodgkin’s lymphoma, which ― with treatment ― has a five-year survival rate of 86 PERCENT. In a grossly ironic (for real this time, Alanis) instance of the cure being worse than the disease, the standard chemo treatment that Cheryl received caused her to develop pulmonary side effects.

When her symptoms became so severe that she had to be admitted to the hospital, I moved in alongside her, sleeping curled up in a blanket on the radiator next to her bed. I was lucky to be able to do that: I had supportive friends and short legs.

Cheryl struggled to breathe for three months, cycling through the intensive care unit, the stepdown unit and then back to the ICU. The memory of standing outside her hospital room yelling, “I’m here, honey! Just look at my face!” while they put her on a BiPAP machine, a single tear running outside the mask and down her cheek, is one of the most searingly painful of my life, perhaps even more painful than the moment she died in my arms.

In that instant of physical separation, I had felt so helpless, like I was doing nothing for her.

After wrestling my respiratory rate into something more compatible with ongoing life, the staff moved me upstairs into the ICU. The next few days were as unpleasant as you might imagine ― struggling to breathe, reliving those terrible moments in the hospital with Cheryl and negotiating all the random death-related worries that popped into my head.

“Damn, I wish I’d given someone my Facebook passcode to shut down my page,” I thought. “I don’t want people writing corny shit on my wall.”

Despite the logistical isolation and the very real physical distress, however, there were moments of connection that kept me from feeling truly alone.

My girlfriend called and said, “You don’t have to talk. We’ll just stay on the phone.”

My roommates texted me photos of our ridiculous cats doing ridiculous things.

A nurse took an extra moment to look into my eyes and not just at my vitals on the monitor.

A respiratory therapist putting me on high flow oxygen started our interaction with “I know this is scary but ….”

The director of pulmonary care laughed at my attempted (but not funny) joke.

After a little less than a week, I was able to breathe well enough to leave the hospital and I am acutely aware of how lucky ― and privileged ― I am. I had economic and logistical access to medical attention that will likely become much more scarce in New York in upcoming weeks. I speak the language of health care and feel comfortable enough in the hospital setting to advocate for myself, even when I was quite sick. I have a job and an apartment to return to.

COVID-19 ― like most crises ― has magnified social and economic inequities and left the planet’s most vulnerable citizens exponentially more vulnerable. On the macro level, if we really believe that everyone deserves the kind of care and support Prince Charles and Tom Hanks are getting, it’s the responsibility of all decent humans to collectively scrap like hell to make that a possibility.

If I’m being honest, I was hoping for a slightly different flavor of global crisis, maybe involving a giant gorilla, a great soundtrack, lots of sexy costumes and the Rock saving us all in the end.

Or at the very least, a scenario in which we could hug.

I doubt that anyone I referenced earlier understands what a profound difference their small actions made to me, just as I didn’t understand ― until this past week ― how being present while just out of reach for Cheryl could have made any difference in her distress.

We can’t say that these small moments of connection through plastic, masks or Wi-Fi mitigate any of the actual human tragedy. But these moments can reinforce our faltering humanity. And while this is far from enough, it is a profound and stunning improvement over no connection at all.