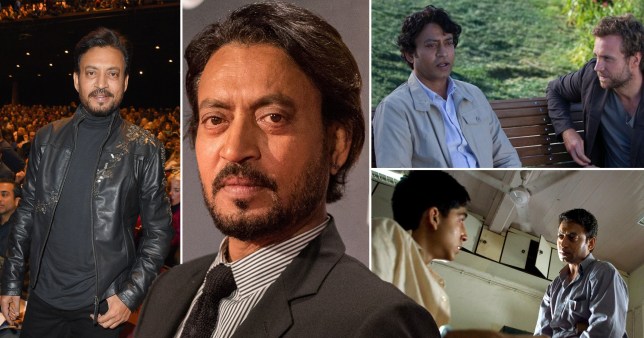 In 1986, when the director Mira Nair was scouting for her film Salaam Bombay! at the National School of Drama in New Delhi, she fixed her gaze on a young man from Jaipur. “I noticed his focus, his intensity, his very remarkable look—his hooded eyes,” she later recalled of seeing Irrfan Khan. Though she cast him, she soon decided that he was too towering at more than six feet, that he seemed too well fed to convincingly play a malnourished child. To Khan’s dismay, Nair pared his role down to scraps. “I remember sobbing all night when Mira told me that my part was reduced to merely nothing,” the actor told the Indian magazine Open in 2015. “But it changed something within me. I was prepared for anything after that.”

The film would go on to be nominated for an Oscar, but Khan’s role in it as a professional letter writer was confined to just one scene. He made an impression anyway, vanishing into the character as though he really did spend his days composing letters on the streets of Mumbai. The setback didn’t blur Khan’s focus but instead revealed it. His dogged work ethic, combined with his striking command of his craft, would make him a star unlike any India had known before. Khan walked the tightrope between commercial and art-house Hindi cinema with ease, helping viewers imagine a future in which such a binary didn’t exist. Even more impressively, he accomplished this while making major inroads in English-language films, appearing in such big-ticket titles as Slumdog Millionaire (2008), Life of Pi (2012), and Jurassic World (2015). He toiled tirelessly throughout his career, thereby cementing himself in popular memory.

The actor died Wednesday in Mumbai, two years after being diagnosed with neuroendocrine cancer. Khan’s final movie, Angrezi Medium, was the last Bollywood film released in theaters before the COVID-19 pandemic resulted in a nationwide lockdown. The film ended up being the bookend to a singular body of work that had begun in 1988 with Salaam Bombay! After that movie, Khan spent more than a decade appearing in television serials and supporting roles on film, before breaking through with his dynamic lead performance as a feudal soldier in Asif Kapadia’s The Warrior (2001). That performance kick-started a career that has no precedent in Indian film history.

Khan’s featherlight touch made the job look simple, distracting you from the fact that acting is, at its core, work. He could play the romantic lead with flushed ardor, as he did in Shoojit Sircar’s Piku (2015), but he knew how to cede the spotlight as a supporting player too. His style was free of the vanity or self-consciousness that could’ve made him seem larger than life. As his fame grew, he retained the essential quality that endeared him to viewers: a sense of relatability. Khan was an everyman who, improbably, became a star.

He was born Sahabzade Irfan Ali Khan—just one R—to a middle-class Muslim family in the city of Jaipur, Rajasthan, in 1967. A shy and gentle kid, he’d wanted to be an actor since he was small, according to a recent biography by the writer Aseem Chhabra. Khan’s immediate family didn’t watch many movies, though, forcing him to nurture his dreams in secret. He understood that his physical attributes, including his darker complexion, could be professional limitations, but he went on to attend the National School of Drama, where he arrived as a bundle of raw potential.

On-screen, Khan’s most vital instrument may have been that pair of soulful eyes that captured Nair’s imagination three decades ago. They could exude menace or innocence, depending on the role. His eyes helped him bring sensual urgency to his early performance as Rahul, a young musician who has an affair with a married woman named Sandhya (played by Dimple Kapadia) in Govind Nihalani’s Drishti (1990). When the two lovers lock gazes, whatever’s transpiring between them feels electric. The film offers Khan just a few short scenes before he more or less evaporates from the narrative, yet the memory of his character lingers long after he’s gone. That role was just a preview of the great work Khan would deliver after the turn of the millennium. Trying to pick highlights from this era is a fool’s errand. He shone in bigger releases such as Vishal Bhardwaj’s Maqbool (2003), a riff on Macbeth set in the Mumbai underworld, and Anurag Basu’s Life in a… Metro (2007), a collage of intersecting tales.

When it comes to independent cinema, Ritesh Batra’s The Lunchbox (2013) features one of his most moving performances. The film, which documents an epistolary bond between two lonely souls, gives Khan a role that bears amusing parallels to his Salaam Bombay! character. He plays a widower named Saajan who marches through each day listlessly. Yet he forges a connection with a stranger, an equally forlorn housewife named Ila (Nimrat Kaur), when they begin exchanging letters by accident. The correspondence seems to awaken Saajan, and Khan makes the character’s decision to gradually let his guard down feel organic. Much of the performance depends on voice-over, and Khan was blessed with a honeyed voice that recalls the tired maxim about an actor being able to recite the phone book without sacrificing a viewer’s attention.

His talents would ferry him to American and British cinema in the late aughts. These films mostly cast Khan in supporting roles, such as his wordless cameo as a villager in Wes Anderson’s The Darjeeling Limited (2007) or his part as a scientist in The Amazing Spider-Man (2012), that only suggested the depth of his talent. (Television, in contrast, gave him a rich showcase in Season 3 of HBO’s In Treatment, where he once again played a widower, this time an immigrant from Kolkata.) These movies didn’t deserve him, but Khan dignified them with his presence, refusing to sink with the flimsy material he was given.

Unlike those works, Nair’s The Namesake, a 2006 film adaptation of Jhumpa Lahiri’s novel of the same name, gave his skills more breathing room. As the professor Ashoke Ganguli, Khan embodies an ideal of the Bengali immigrant father in the eyes of his son, Gogol (Kal Penn). He is at once a figment of memory and a person whose struggles and desires feel achingly real. Ashoke is a specific kind of person, a Bengali intellectual who adapts to life in America after a rough period of adjustment. The eventual tragedy at the heart of the narrative—Ashoke’s sudden death—is piercing because of how vividly Khan portrays this man.

Who could’ve predicted that Khan would, like his character in that film, leave us young and without much warning? It’s tempting to wonder what characters Khan would’ve introduced us to as he eased into old age, as his hair began to gray. That viewers are deprived of knowing feels like theft. Among The Namesake’s most arresting moments is a scene in which Ashoke narrates the story of how he named his son. The sequence plays on Khan’s strongest devices: You see those eyes glimmer with pain and pride, and Khan’s voice shepherds you through this man’s past. His is a love you recognize as human, but Khan expresses the sentiment with restraint. It’s a kind of beauty, in other words, that you only see in movies. (Copied from the Atlantic)

Author’s bio: MAYUKH SEN is a writer based in New York. He is the winner of a James Beard Award and an adjunct professor at New York University.