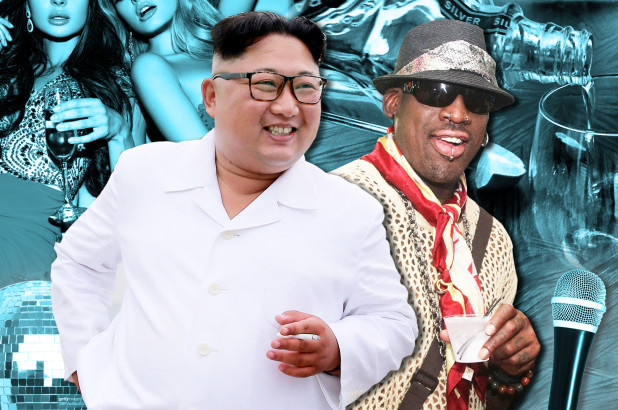 NBA legend Dennis Rodman dished on his longtime bromance with the North Korean despot — revealing how the pair partied with “hotties and vodka” when they first met.

Rodman, now 58, went to Pyongyang in 2013 on a trip with the Harlem Globetrotters and “dignitaries,” he said on ex-boxer Mike Tyson’s HotBoxin’ podcast last week.

“I’m thinking I’m going to do an autograph show or play basketball. I ain’t know anything about North Korea, stupid as f–k, right?,” he said.

When Kim went to greet Rodman following a basketball game, the ex-hoopster said he didn’t know who the leader was.

The now 36-year-old dictator then told him: “We asked Michael Jordan to come but he wouldn’t come so we asked you.”

They quickly bonded over their shared love of the game, and then Kim invited him to his home for a wild party, Rodman claims.

“Let’s have dinner tonight. A little karaoke and have some vodka, some hotties and stuff like that,” Rodman said the North Korean leader told him.

“Next thing I know, we are having dinner and we are drunk as sh-t, he starts singing karaoke and I have no clue what the f–k he’s talking about.”

The Hall of Famer suggested they learn other tunes — some Pearl Jam, Van Halen and Rolling Stones — and, the next time he visited North Korea, they played all his requests.

He said he’s seen the hermit kingdom’s “military [and] missiles,” — but that he’s never talked politics with Kim.

“The politics, I don’t get involved with that,” Rodman said. “I came here to bring sports.”

Following recent wild speculation over Kim’s health, Rodman told The Post last week that he believed his old pal was doing just fine — and probably spending his time like most Americans: watching the Jordan documentary “The Last Dance.” (Copied from here)