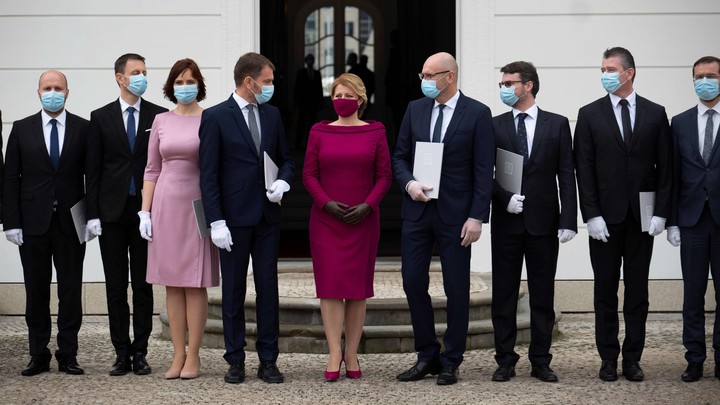 In March, when the severity of the coronavirus pandemic was becoming clear but many of the world’s leading nations had yet to formulate a response to it, one country was springing into action. Within 10 days of identifying its first case, it went into lockdown: Its borders were sealed, schools and restaurants were closed, and face masks were made mandatory in public places, with some of the country’s most visible public figures, including its president and prime minister, sporting them to set an example.

Today, life there is slowly returning to its usual rhythm. Small shops are reopening and hotels, restaurant terraces, and hairdressers have been invited to join them. Should its infection rate continue to slow, schools and sporting events won’t be far behind. The remarkable thing is, this isn’t an especially rich country with a strong national health system, nor was it regarded as particularly well equipped to handle a pandemic in the first place.

The country in question? Slovakia, the nation with the lowest per-capita death rate in all of Europe, and the one that on Friday recorded its first day of no new cases since March.

When this pandemic ends, and when the reckoning over how the world responded invariably begins, Slovakia will likely be among those highlighted as a success story, whereas the United States—which was supposed to be the country best prepared for such a crisis—will be remembered as among those that suffered the worst. How Slovakia was able to flatten its curve comes down to more than just quick decision making and the widespread adoption of face masks. Perhaps the greatest lesson to be learned from Slovakia is of the value of leading from the front.

One of the difficulties of comparing the performances of various countries in response to the coronavirus is all the differences among them. The U.S., for example, has a population 60 times that of Slovakia. It also faced the threat of an outbreak much sooner, registering its first confirmed case of the coronavirus in late January, more than a month before the virus appeared in Slovakia. But such discrepancies do little to explain how a country like Slovakia—which has recorded fewer than 1,500 cases of the virus and has kept the growth of new infections to the single digits—managed to prevent itself from being overrun by the coronavirus in a way that bigger and richer countries have not.

Three key factors helped it. The first, and perhaps the most fundamental, was its national leadership. The country’s president, Zuzana Čaputová, and its nascent government administration, which came to power amid the pandemic, were among the first to model best practices for how to handle the outbreak—most notably by wearing protective masks and gloves for the government’s swearing-in ceremony. Their efforts played a crucial role in normalizing the use of face masks across the country.

The same cannot be said for the rest of the world, where barely any leaders have opted to sport face coverings. In the U.S., where only a select few states have mandated that people wear masks outdoors, President Donald Trump and Vice President Mike Pence have both refused to wear face masks, even as an outbreak has appeared in the White House. British Prime Minister Boris Johnson, who suffered from his own bout of COVID-19, has yet to be seen wearing a mask as well (although as of this week his government has advised people to wear face coverings in enclosed spaces).

That signal from the top in Slovakia helped set the tone for the second factor: the widespread adoption of face masks. Despite often-conflicting advice about the efficacy of masks, Slovakia was among the first countries worldwide (and the second in Europe, after the Czech Republic) to make them mandatory in public spaces. This decision put it at odds with the World Health Organization, which has so far held off on advising people to wear masks in public. Andrej Šteňo, an associate professor of neurosurgery at Comenius University in Bratislava, told me that he and others in the Slovak medical community had settled on a different recommendation, eventually sharing their findings with the Slovak politician Martin Barto, who began emphasizing the potential benefits of wearing face masks in public. By March 13—exactly a week after Slovakia confirmed its first coronavirus case—the country’s prime minister and health minister had both appeared on Slovak television wearing masks, and today virtually no Slovak politician, journalist, or public figure is seen in public without one. Čaputová even gained international notoriety for picking one that matched her outfit.

Like much of the Western world, Slovakia wasn’t predisposed to face masks. Compared with countries in East Asia, where sporting masks is widely regarded as a matter of public courtesy, “there was no face-mask tradition in Slovakia,” Šteňo said. For this reason, the country went to extra lengths to shift perceptions around their use, including through an online campaign in which people shared photos of themselves wearing masks.

But it wasn’t just that Slovak leaders and public figures were seen wearing masks. They also had a clear explanation for why they were doing so. “The communication campaign was very strong from the beginning,” Nad’a Kovalcikova, a program manager at the German Marshall Fund’s Brussels office, told me. The message was “Protect others and you’ll be protected … It’s not embarrassing. It helps everyone.” Though Slovakia, like other countries, faced its own shortage of personal protective equipment, Kovalcikova said that efforts to shore up the country’s mask supply ensured that everyone who needed one got one. “Individual people were producing [masks] themselves,” she said. “But not only for themselves. They were donating [them] for free to other people.”

The third and final factor that contributed to Slovakia’s success was its decision to impose a nationwide lockdown when it did. Although it wasn’t among the first countries to face the coronavirus on its soil, it behaved as though it were: Ten days after reporting its first case, the country mobilized. “Seeing what happened [in northern Italy] was really a big warning for us,” Šteňo said, adding that Slovakia was quick to realize that its public-health system couldn’t compete with the capacity of those in Western European countries. Fears that their hospitals could be overwhelmed by an influx of patients—as seen in Italy and Spain—is one theory for why Eastern European countries acted more quickly than their Western counterparts to impose lockdowns. Another is that they were simply more cautious than the rest of their European neighbors. “Slovakia was trying to be very careful and realistic about the risks,” Kovalcikova said.

The picture in Slovakia has now changed—but its leaders are still proceeding with caution and leading by example. “Hopefully things will go back to normal,” Čaputová told two park-goers last week, both of whom were wearing face masks. But if they don’t, and if a second wave appears, she added: “We will be better prepared. We will be able to mitigate the impact.” (copied from The Atlantic)

Author’s bio: YASMEEN SERHAN is a London-based staff writer at The Atlantic.