Why Trump is threatening to ‘close’ social media platforms 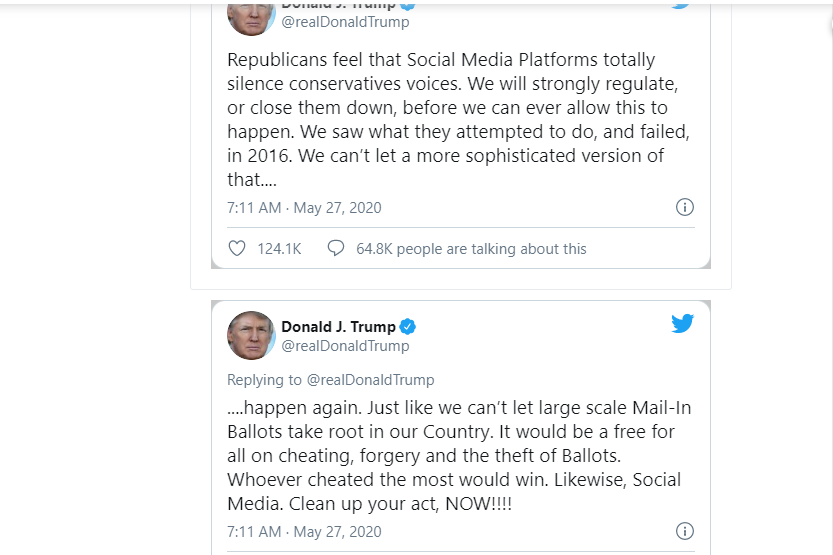 Don’t do it, Mark Zuckerberg. Same to you, Jack Dorsey.

Don’t take Donald Trump’s bait. On Wednesday morning, in response to being fact-checked by Twitter over (false) claims that mail-in ballots would lead to a “Rigged Election,” the president tweeted this:

First, mail-in ballots do not significantly increase the risk of voter fraud. Overall, voter fraud isn’t a big problem in U.S. elections. Trump, meanwhile, has explicitly said he believes that high voter turnout hurts Republicans. He’s not worried about fraud; he’s worried that if Americans vote in large numbers, he will lose the election.

Twitter was right to fact-check Trump. From the day he took office to the beginning of last month, Trump has lied on Twitter alone more 3,300 times, according to theWashington Post.

And that didn’t even involve removing the tweet. Instead, it was appended with the message, “Get the facts about mail-in ballots,” which linked to relevant articles.

SEE ALSO: Twitter’s ‘no replies’ feature could cause problems for Trump

As for Trump’s claims that social media platforms “totally silence conservative’s voices,” well, just spend a few minutes on Twitter and Facebook. Fox News and the right-wing Daily Wire were among the top 11 publishers on Facebook last month. Conservatives are spreading dangerous coronavirus misinformation all over Twitter.

Social media platforms don’t silence conservatives. They amplify extremes. A slide presented to Facebook executives in 2018, uncovered by the Wall Street Journal, showed a terrifying, matter-of-fact statement: “Our algorithms exploit the human brain’s attraction to divisiveness.” The WSJ uncovered another internal Facebook report from 2016 that said that 64 percent of people who joined extremist groups on the platform did so because Facebook’s algorithm recommended them.

Donald Trump is thriving on Twitter. The Republican Party’s message is spreading just fine on Facebook. When the president says he will “strongly regulate” or “close” social media companies down, he’s putting pressure on Facebook CEO Mark Zuckerberg and Twitter CEO Jack Dorsey to keep the right-wing fire hose of misinformation flowing.

If they don’t call out Trump’s lies, they keep making a lot of money, and the president can try to subvert the 2020 elections.

We need Twitter to fact-check more of Trump’s tweets. We need Facebook to do more to limit the spread of far-right content. Don’t let Trump bully you, Mark. Same to you, Jack. The 2020 election is right around the corner, and pretending the president’s rage tweets contain valid arguments could have disastrous repercussions.