But I am Okay: Reflecting on the Memories of being Black 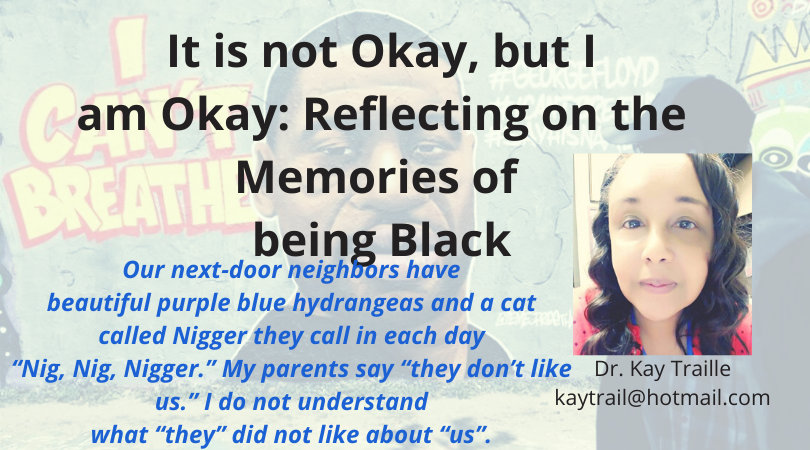 Yesterday a colleague called to ask if I was okay. I was nonchalant in my reply although I knew what and why he was asking. The truth is I am tired.  The young people I see demonstrating around the world give me a glimmer of hope to believe things must change in societies where just being is a problem. Trying to understand why this incident feels like the proverbial straw on the back of the camel, I traced the first 19 years of my life. Here is a flavor of what I remember.

When I walk down the street with my father and brother, some children call us “caste-half.” I think they are stupid as I know the word is “half-caste,” and although my father looks white, he is not. My father is quite tall with broad shoulders and huge hands. He is prematurely grey with hazel eyes. He has no color. I think he is grey.

My mother, glued to the television, is crying. I ask why and she tells me “President Kennedy is dead.” “Who is President Kennedy? “He is someone who said he was going to help colored people.” I am still not sure who he is, but I know he must be a good person if my mum says so.

At school my older sister Rose Marie is regularly doused with water by other students who call her a variety of nasty names because of her caramel skin making her school days hellish.

As baby boomers born in the United Kingdom, we live in cities surrounded by traces of the past. I attend a primary school called Wilberforce. I do not recall ever being told who Wilberforce is or what he did. It is just another school name like “Our lady of Dolores” or “Saint Augustine.”  In the playground we  sing rhyming songs unknowingly about the Napoleonic wars “When the War was over and Josephine was dead, she wanted to go up to heaven with a crown upon her head, but the Lord said no  you’ve been a naughty girl you can’t go up to heaven, but you can go down to hell.” We play on streets with huge blocked off craters between houses shored up with thick wooden beams. They are called “bombsites” that even the naughtiest of children shun.  I don’t know what the word “bombsite” really means. Our Jewish classmate Ruth with only a father as a family member is the subject of glances and whispers from grownups that I don’t understand. I sing songs about Hitler that make me giggle but I have no idea who he is., “Hitler has only got one ball, the other is in the Albert Hall his mother the dirty bugger, took it away from him when he was small.” The double entendre has no meaning they are just catchy rhyming words.

My mother is angry and flabbergasted at being asked if she has a tail. She cannot believe just how ignorant the general population are about the Caribbean Islands and West Indians who had fought in World Wars., given money to buy war planes and knew so much about the British Isles, but British  people knew very little about us.

I decide my career when I am about 7 years old.  I tell my mum “when I grow up I want to be three things, 1. a politician, or 2. a lawyer, or 3. a teacher.” My mother says “be a teacher the other two have to tell too many lies.” I decide I will become a teacher.

My Woolworth watercolors have “nigger brown,” my school books have stories about “Ten little Niggers.” In the playground I chant “eeny meeny miny moe catch a nigger by the toe” to pick sides for a game. My teacher asks me why I haven’t read the “Little Black Sambo” books.

Our next-door neighbors have beautiful purple blue hydrangeas and a cat called Nigger they call in each day “Nig, Nig, Nigger.” My parents say “they don’t like us.” I do not understand what “they” did not like about “us”.

I can remember exactly when I become black and not coloured. In my last year of Primary school I am telling my mother a story about something that has happened. I say something about “a coloured girl,” Rose Marie my sister, six years older than me shouts angrily, “what colour was she? Green? Purple? Blue? She is black like you are black, coloured is not a colour.” I never use the word “coloured” again to describe someone or myself.

I can remember exactly when I become black and not coloured. In my last year of Primary school I am telling my mother a story about something that has happened. I say something about “a coloured girl,” Rose Marie my sister, six years older than me shouts angrily, “what colour was she? Green? Purple? Blue? She is black like you are black, coloured is not a colour.” I never use the word “coloured” again to describe someone or myself.

My father says “if anyone ever calls me black I will kick them.”

I cringe in lessons about the Triangular trade,, disease and drawings of sardine like people packed tightly in a ship’s hold, and the print of a black person in chains begging for recognition are still vivid. I feel relief when it is over and the mantra of “black people did not write things down” so there is no history about them oral traditions are not “real history,” echoes in my head. My mother’s love for history trickles down to me, but I slowly realize when Black people are studied, it is usually through quaint and exotic, anthropological eyes more “sociological” than “historical.”

In our Latin class, Ms Reyes sees a group of us black students sitting together, she asks, “why do you people always sit together?” White girls are sitting next to each other but this does not seem to be a problem.

Our white friends tell stories and jokes about black people and say “not like you.” “Why do colored people eat KitKats wearing white gloves?” the answer “because they might bite their fingers.”

After the death of my mother, my English teacher invites me to her home on the Norfolk Broads. The land is flat as far as the eye can see. The sheets are crisp and cold. Mrs. Brown tells me about her own mother. When we watch a comedy sketch on television, and someone makes a joke about death, she reprimands the T.V. The leader of the “National Front” a right wing racist organization lives nearby. Skinheads, white men with shaved heads are his followers, they beat up black and “Paki” people which is what they call people from Pakistan. Mrs. Brown scolds the invisible leader as we drive past his house.

It is the weekend “The Black and White Minstrels Show” is on television, weekly, white people in “black face” are singing about “darkies.” It is the late 1970s.

Rose Marie my sister is walking down the escalators at Kings Cross tube station, a man is shouting about “bloody, fucking Paki people,” he begins kicking her calling her a “bloody fucking Paki.”

These incidents are just an ordinary snapshots of everyday life. Now they have names, we talk about Micro Aggressions and Triggering Events. And still it goes on.

It is 2015, I have just finished teaching a survey American History class on the Reconstruction period post the Civil War. At the end of the class, an African American male student approaches me and says with tears and terror in his eyes, “I am so afraid,” he talks about how fearful he is as a young black man in the Southern United States, and asks what I think about the recent police shootings of unarmed young black men. And I am ashamed that my generation has not done enough to change this world for him.

I am tired. “But still like dust I rise” and believe we can be better than this. I must. I am okay.

Author’s bio: Dr. Kay Traille is Associate Professor of History and History Education and also the author of “Hearing Their Voices.“