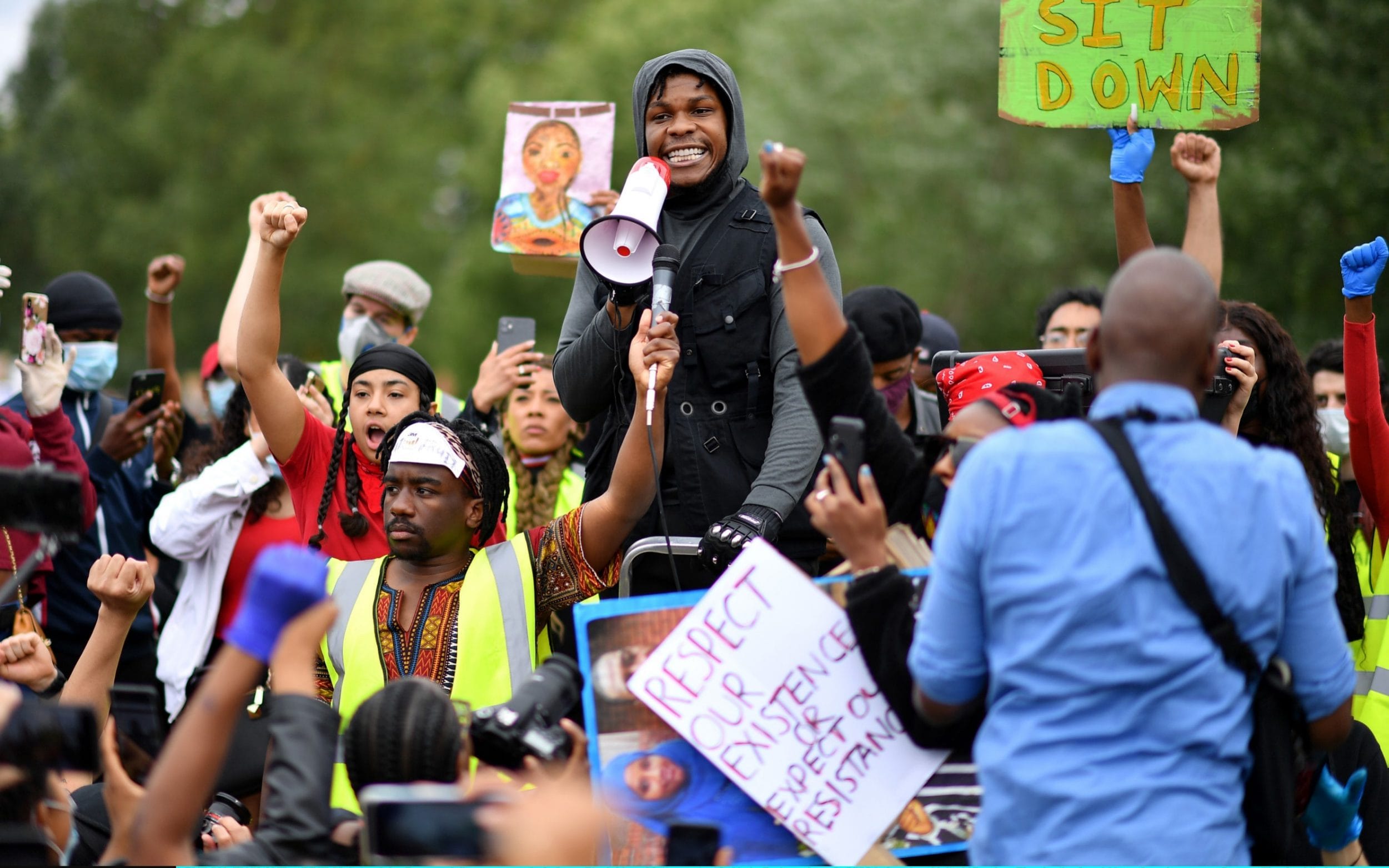 London (CNN)The police killing of George Floyd has resonated around the world. In London — some 4,000 miles from where Floyd died in Minnesota — thousands of protesters gathered on Wednesday to show solidarity with mourning Americans.It was a peaceful Black Lives Matter demonstration in Hyde Park, where protesters of many different racial and cultural backgrounds chanted Floyd’s name through their face masks, demanding justice. Several protesters shared their outrage over the killing to CNN, drawing parallels with their own experiences, and expressed dismay about US President Donald Trump’s reaction to the protests.

Geovane Silva, who works at a McDonald’s and studies music.”There’s racism everywhere, and we have to fight it. I don’t just mean white people against black people. Racism is racism, and that’s what we have to fight. We have to be just one, human beings, we just need to be one. We all breathe the same air, we all bleed the same color.”When I saw what happened to George Floyd, I cried. Man, I cried, because someone is being killed for just looking like me. He did nothing wrong, absolutely nothing wrong, and even if he did, there’s ways to deal with that. Why do other people get ways to deal with that but we don’t? The only way to deal with us is through violence. Why? We are not savages, we are not animals — we are people, like everyone else, and we deserve to be free.

Demonstrators raise their fists while observing a minute of silence during a demonstration for George Floyd outside the Houses of Parliament, on Wednesday.”We can’t have people being scared when reaching for their wallets in their car. We can’t have people being scared when they are raided at home by the police and being killed. We can’t have people being scared of being on the street, not doing nothing, just standing on the street and the police come and finds a reason to shoot you and to kill you and to take your breath. (…)”It’s not the first time. Five years ago we were yelling the same thing — ‘I can’t breathe.’ Why do we still have to do it today? It makes no sense. How can this still be? Why can’t people understand we are one? Why so much hate?”This is way bigger than just America, it’s way bigger than George Floyd. It’s way bigger than just one cop killing a black man — it’s about injustice.”

Cleo Charlery, who studies social work, and her sister, Carla Charlery, 22.”I tried to avoid watching the George Floyd video, but it got to a point where I couldn’t, so I looked and I felt so broken. I felt enraged with anger. I have a daughter, my partner’s black, I’ve got black siblings. It could have happened to anyone, any of my family members, so I was enraged with anger. I cried, then I started sharing everything I felt on social media.”I’m tired of it. I’m tired of everyone screaming ‘black lives matter’— come on, this is common sense now. We are equal, just like everyone else. We should be, do you understand? We should have rights like everyone else. But it appears in America, and in the UK, we have no rights when it comes to justice.”The difference is, I feel in the UK they know how to hide it pretty good, while in America, no one cares. They’ll let you know they’re racist. They don’t care about it. Where in the UK everyone is hiding it, but it comes out unconsciously, so I think that the UK is just as bad as America. (…)”In terms of Trump. I’m so tired of him. I feel like he’s gaslighting the entire situation and calling a war on black people.”

Kingsley Daniels, who works as a musician and a chef.”I’m not protesting just for me. I’m thinking about the future, for the next generation. My kids, our grandkids, trying to make sure they can do whatever they want in life, and not have prejudice against them. Not have to work 10 times as hard as a white man, just to get a job they didn’t know they deserved, that they put blood sweat and tears into.”I want my kids, anyone’s kids, any black men, black women, anyone who wants to do anything with their lives, that they can do it. They don’t have to worry about prejudice, or worry about ‘If I walk out of the house, am I going to make it home tonight? Can I go to another country to see what it’s like? If I do, will I make it home?’

Protesters moved between stopped buses and cars and the protest moved through central London.”One of my dreams is to end up in New York and work there for a living. But now I have to put that on hold and think carefully because I don’t want to go out there and not make it home. So I’m doing this now to make sure all of our kids, and the next generations after and after and after, they can be at peace and not have to worry. Parents don’t have to worry about their kids not coming home. Parents are already worry about that here in London because of knife crime.”Trump’s reaction to all this shows he’s a joke. He’s actually a joke. The fact that they call him a president is a joke. He’s not a president. He’s not ruling nothing. He’s a man who doesn’t know how to hold his tongue, how to think before he speaks, and does not care about anyone other than his pockets and himself.”

Gail Lewis, an academic in race and gender studies.”I’m here today for George Floyd. I’m here for Breonna Taylor. I’m here for all the murders that have happened in the States and here in London. I’m 69 years old … and I’m here because of the continuing anti-blackness in this country, as well as the USA, and the connections between us here and in the USA and all of the Americas.”And the need to protest every way in which black life is made valueless, in every way, through murder and state violence, through white supremacist violence, and also through the most demeaning of factors: Through the names our children are subjected to, through the idea the jobs that we do are not valued, and therefore we get more subject to the coronavirus and die more — in every way. The need to protest that here in this country, in solidarity, but also to make transformation in this racist society as well.

Two protesters join hands as they rally in London.”When I was a young adolescent protesting, there would be a few of us, in this very park, just 10 or 12. Now today, I see this number of people for black life. Not for anything else, but for black life. That is a huge transformation. It makes me cry.”It makes me cry both to see it, to see the commitment to black life, and it makes me cry because we have to be here.”

Ola Soetan, who work in warehouses.”Sometimes you can be walking down the road and the cops will search you for no reason. That happened to me in Ireland, where I used to live. I’ve lived here in London now for eight months and I see people get racially profiled. They’re wrongly accused because of their skin color. It’s not fair.”It’s frustrating, because there’s no justice, the evidence is right there but they always try to defend them. Like with George Floyd, they’re leaning on someone’s neck, and they’re trying to defend them. You can’t defend them. They’re human beings, you know. How can you do that when they’re begging for their life? As a human being, if you see someone suffering?”You can’t bring them back, they’re gone. All the police are the same. They say there are good cops, but if you see a bad cop do something and you don’t call them out, you’re the same as them, because you’re keeping quiet. If I see someone do something bad, I’ll speak out. Everyone should be treated equally.

Demonstrators gather in Hyde Park on Wednesday.”If it weren’t for social media, we wouldn’t know the truth.”

Meisha Franciso, who works in retail, with her friend, Sean Archer.”Growing up as a young black person, especially as I’ve come up in a white area, I think it’s important to make sure that racism does stop, and that everyone gets looked at as a person. I’ve come here today to show my support and to make sure we do get looked at as equal people.”In the US, I think it’s obviously very disgusting. People shouldn’t have to worry about going out because they’re going to get killed because of the color of their skin. You see people who are white doing the same things and it’s not a problem, but people look at the color of your skin and if they’re black, they automatically think ‘That’s a criminal and they don’t deserve to live,’ and that’s bad, very bad.”In the UK I feel it’s obviously not as bad as in the US, but there is definitely stuff that doesn’t get spoken about. I feel like when people go for jobs, people need to be looked at as a person and not the color of their skin, which is a problem here. In workplaces, in schools, even just in a large group, you get noticed for being black.

Demonstrators display pictures of George Floyd.”The more people who come out against racism, the more changes they’ll have to make.”

Happy Idehen Hill, from right, with her son, Xander, and husband, Alex Hill.”We came to protest against police brutality, against black people, mostly. They’ve been brutal to all races, but it’s been obvious that the black race has been affected mostly, so we’re just here to protest that and demand change to the system. It just needs to change.”I think in America, it’s totally different than here in the UK. Here in the UK, racism is less than when I lived in Spain. You feel it. Some people, they don’t come to your face and say it. The way they treat you differently, maybe when you’re at work.”The reason we brought our son Xander here is I just want him to be part of history. I think everything is going to change after this. and I’m hopeful it’s going to change. Our forefathers have done it before, and this is another kind of change we’re going to experience, so we just want him to be part of that.”