Trump Represents a Bigger Threat Than Ever to U.S. Democracy 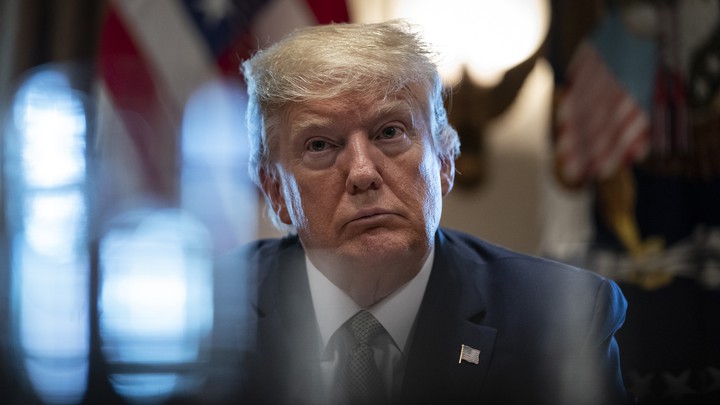 WASHINGTON, DC - MARCH 17: U.S. President Donald Trump leads a meeting with travel and tourism industry executives to discuss economic response to the coronavirus outbreak in the Cabinet Room of the White House on March 17, 2020 in Washington, DC. The Trump administration is considering an $850 billion stimulus package to counter the economic fallout as the coronavirus spreads. (Photo by Drew Angerer/Getty Images)

The former Vice-President Joe Biden, in a speech in Philadelphia on Tuesday, said many of the right things, including issuing promises to ban police choke holds and create a national police-oversight commission. He also grabbed headlines by accusing President Donald Trump of having “turned this country into a battleground riven by old resentments and fresh fears.” But the passage of the speech that really stuck with me came when Biden talked about Trump “preening and sweeping away all the guardrails that have long protected our democracy.”

Rather than brandishing the Bible, as Trump did outside St. John’s Episcopal Church on Monday evening, he should read it, and the U.S. Constitution, too, Biden stated. In the latter document, he added, the President would discover a reference to “the right of the people peaceably to assemble and to petition their government for redress of grievances.” His voice dropping almost to a whisper, Biden went on, “That’s kind of an essential notion built into this country. Mr. President, that’s America. That’s America. No horses rising up on their hind legs to push back peaceful protest. Not using the American military to move against the American people. This is a nation of values. Our freedom to speak is a cherished knowledge that lives inside every American, almost from the time when you are a kid. We’ll not allow any President to quiet their voice.”

After sheltering in place at his home in Delaware for much of the past three months, Biden had finally rediscovered his voice. If he makes it to the White House, he may turn out to be an ineffectual President or a great one, but the country can rest assured that he will show a great deal more respect than the current incumbent does for the right to protest and the civilian-military divide. At this stage, though, the question is whether Biden will get the opportunity to succeed Trump in a free and fair election.

Not so long ago, raising this question may have been dismissed as alarmist. Over the past three and a half years, many people, myself included, had reassured themselves that Trump’s bumbling and lack of focus served to contain some of his authoritarian instincts. But his response to the protests of George Floyd’s killing has brought back to the fore the warnings about “democratic erosion” that a number of political scientists issued immediately after his election, in 2016. “If anything, the isolation and pressures of the Oval Office might further warp his ego and exaggerate his dictatorial tendencies,” I wrote, in a column that referenced some of these warnings. “Surrounded by yes-men, he could well be tempted to try to expand his powers, especially when things go wrong, as they inevitably do at some point in any Presidency.”

One of the political scientists I cited in that 2016 piece was Jeff Colgan, of Brown University. He had posted online a useful list of “warning signs of democratic breakdown,” which included several that seem particularly pertinent now. One of them was “Identification of crises or political paralysis to justify emergency measures.” Another one was “Significant increase in the internal security forces.”

On Tuesday, I called up Colgan, whose research focusses on international order, and he didn’t hide his alarm about the situation in the United States. “Warning lights for democracy are flashing all over the dashboard,” he said. “There are just multiple threats.” He cited Trump’s provocative statements but also pointed to the presence of General Mark Milley, the chairman of the Joint Chiefs of Staff, on the streets of Washington, D.C., on Monday night, apparently to check out the situation, and to the request from Mark Esper, the Secretary of Defense, to “dominate the battle space” during a conference call with governors on Monday. “In short, things are a lot more alarming than they seemed even a couple of weeks ago,” Colgan said.

Other experienced observers have reached a similar conclusion. “The ‘battle space’ of America??? Not what America needs to hear . . . ever, unless we are invaded by an adversary or experience a constitutional failure . . . ie a Civil War . . .” General Tony Thomas, a retired head of the U.S. Special Operations Command, said, on Twitter, on Monday. After U.S. Park Police used smoke cannisters and pepper balls (observers say they used tear gas) to clear Lafayette Park of peaceful protesters on Monday evening, so that Trump could stage a photo op outside St. John’s Episcopal Church, Marc Polymeropoulos, a former case officer for the C.I.A., tweeted to register his concern. “It reminded me of what I reported on for years in the third world. Saddam. Bashar. Qaddafi. They all did this,” Polymeropoulos wrote.

Former generals and former C.I.A. officers don’t have much influence, of course. It would have been a far more powerful gesture if General Milley, after Trump handed him the responsibility of dealing with the protests, had turned down the assignment and resigned, on the grounds that dealing with domestic political unrest isn’t his role. It might also have helped the situation if a single member of the Republican leadership on Capitol Hill had summoned the guts to criticize Trump, or to assert Congress’s position as an equal branch of government during a national emergency. But, of course, Trump trampled down that particular guardrail many moons ago.

Let’s hope that the President’s talk of militarizing the response to the protests represented political posturing, rather than an actual plan he intends to follow through on. One can never underestimate his B.S. factor, or the possibility of a reversal. Esper’s statement, on Wednesday morning, that he doesn’t support invoking the 1807 Insurrection Act, which allows the President to deploy the military on U.S. soil for certain purposes, represented a welcome display of independence on his part, especially after his earlier remarks to the governors. But, on the other hand, there is no end in sight to the protests, Trump is consistently trailing Biden in the polls, and he is also surrounded by dangerous intriguers, such as Attorney General William Barr. Right now, it seems far from inconceivable that he would go ahead and overrule local officials to send in the U.S. Army. If that happened, it would probably take an emergency stay from the Supreme Court to stop him. And how likely is this Court to issue such a ruling?

Even if Trump draws back from this precipice, the danger to U.S. democracy that he represents will remain in place for at least another five months. From today—June 3rd—the election is precisely that far away, and Trump is not the type to give up power readily. “Every bit of evidence suggests he will lose in a fair fight,” Colgan told me. “The conclusion that follows from that is we know with near certainty it is not going to be a fair fight. I think we will face ongoing threats to American democracy right up to Election Day, and possibly after that, too.”

John Cassidy has been a staff writer at The New Yorker since 1995. He also writes a column about politics, economics, and more for newyorker.com

(Copied from The New Yorker)