After a White man repeatedly erased girl’s ‘Black Lives Matter’ chalk drawing in front of her home, neighbors stepped in to show support 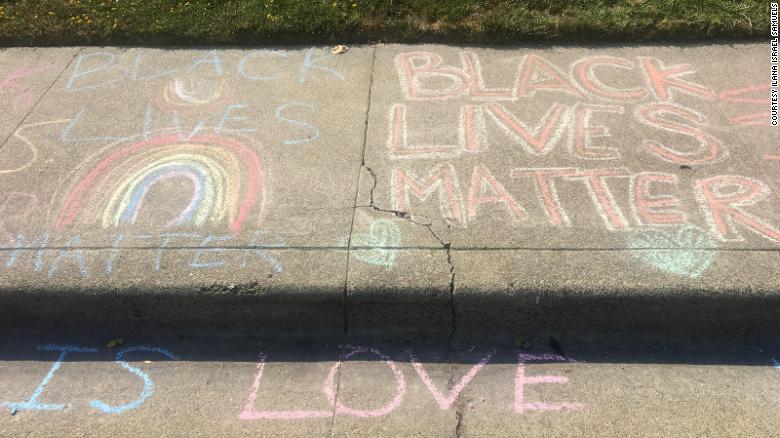 (CNN)Every day for nearly a week, Manette Sharick and her 3-year-old daughter, Zhuri, drew “Black Lives Matter” in chalk across the sidewalk outside their home in Concord, California.

But every time they wrote the message, they woke up the next morning to find that the word Black, and only that word, had been erased.

“I just wanted to teach my daughter that Black lives matter, Black culture matters, Black communities matter, and that we are the movement for Black lives,” Sharick, who is Black, told CNN. “I was shocked that someone could be purposefully doing this. It hurt a lot, it made me extremely upset.”

That’s when she saw a man she says she never met and only knows as Jim, pouring water over the message. In a video Sharick recorded on her phone after running out to confront him, the man tells her that he will continue to remove the word “as long as she keeps on doing this.”

“I was only pouring across the word Black because I believe that all lives matter,” Jim told CNN affiliate KGO. “I don’t care what nationality, sexual orientation or any of that, we are all human beings.”

He added that he erased the “Black” from Black Lives Matter because he felt in the beginning of the movement “it had good intentions” but now the phrase has been “hijacked.”

CNN could not reach Jim for comment because he has not released his last name.
A ‘blatant display of racism’

Sharick moved into the neighborhood 27 years ago. She said this was the first time she ever faced with “such a blatant display of racism.”

“He had that much time and energy to take time out of his day, every day, to bring water and come to my home and erase ‘Black’ from ‘Black Lives Matter,'” she added. “It hurt. It hurt a lot. As a Black community we are heartbroken by everything done against us every day. We just want change.”

After sharing the video on Instagram and Facebook on July 30, word began to spread. The next day, Sharick said dozens of people from in and out of the neighborhood showed up in front of Sharick’s home with chalk to draw supporting messages all over the sidewalk on her side of the street and even in front of their own homes.

One of these neighbors is Ilana Israel Samuels, who told CNN she refused to stay silent after finding out someone in her neighborhood was facing discrimination.

“People need to stand with their Black neighbors in support. All lives can’t matter until Black lives matter. Right now, Black lives are being harmed, murdered by police, and they are constantly living in fear,” Samuels said.

After neighbors left the sidewalk covered in positive messages encouraging love, hope, and kindness, as well as support for the Black Lives Matter movement, Sharick and her daughter continued to rewrite the message every day.

Since the outpour of support, the man has not tried to erase the message again.

“I am deeply thankful and blessed for the special, unique, amazing people in my life who supported me, uplifted me and comforted me,” Sharick said, “My family and I are grateful for the help and support we have received from the community.”

While words can be washed away and chalk may fade, this community’s message will stand forever.