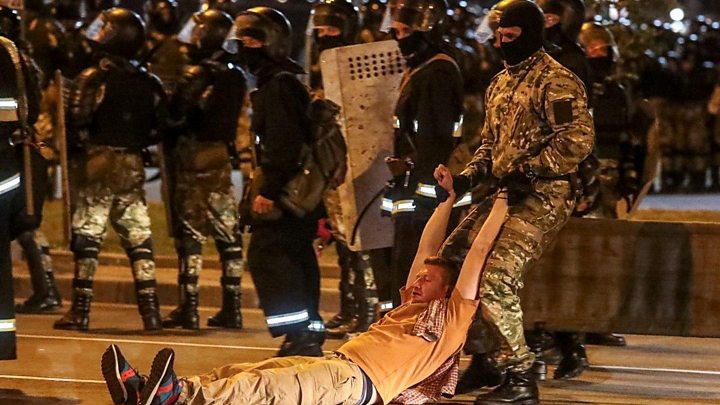 The main challenger to Belarus’s Alexander Lukashenko has refused to accept the autocratic president won 80% of the vote in Sunday’s election.

“I consider myself the winner of this election,” Svetlana Tikhanovskaya said on Monday.

This follows thousands of arrests after protesters and riot police clashed in the capital Minsk and other cities.

A lack of scrutiny – no observers were present – has led to widespread fears of vote-rigging in the poll.

The election was held amid growing frustration at Mr Lukashenko’s leadership, with opposition rallies attracting large crowds. The preceding days saw a crackdown on activists and journalists.

The president has described opposition supporters as “sheep” controlled from abroad, and vowed not to allow the country to be torn apart.

Mr Lukashenko won 80.23% of the vote, according to a preliminary count, with Ms Tikhanovskaya receiving 9.9%.

Ms Tikhanovskaya entered the election in place of her jailed husband and went on to lead large opposition rallies.

What did Ms Tikhanovskaya say?
The opposition candidate said that the election results published on Monday morning “completely contradict common sense” and the authorities should think about how to peacefully hand over power.

“We have seen that the authorities are trying to hold on to their positions by force,” she said.