Will America Let COVID-19 Become The Next HIV? 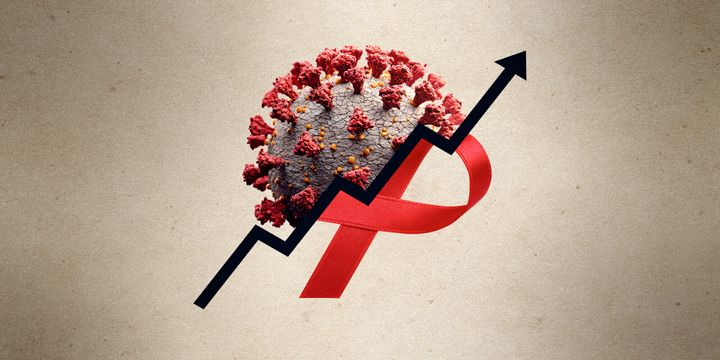 COVID-19 is settling into the cracks of American inequality.

Over the last two months, coronavirus cases have surged in the most marginalized neighborhoods of the poorest states. Latinx people account for 18% of the population but 33% of infections. Black Americans are nearly twice as likely to die and three times more likely to be hospitalized with COVID-19. Prisoners, farmworkers and meatpackers — all of whom are disproportionately likely to be poor and minorities — have the highest infection rates.

For many epidemiologists, this pattern has a tragic precursor: HIV.

Before the development of antiretroviral therapy, the human immunodeficiency virus that causes AIDS was concentrated in cities, ravaging gay men and drug users from a relatively wide range of races and incomes. Since the late 1990s, however, AIDS has become a disease that almost exclusively affects the rural poor and people of color.

As of 2018, people of color accounted for 69% of new HIV infections. Black and Latinx Americans are 550% and 80% more likely, respectively, to die of AIDS than whites. The cities with the highest rates of new HIV infections in 2016 included Baton Rouge, Louisiana; Jackson, Mississippi; and Memphis, Tennessee. In 2018, San Francisco had roughly half as many new HIV infections as New Orleans despite having twice as many residents.

“If you put a map of the HIV epidemic over a map of the worst coronavirus hotspots, they look almost identical,” said Jared Baeten, the vice dean of the University of Washington’s School of Public Health and an HIV epidemiologist for more than a decade. “COVID is becoming just another disease that travels along the fault lines of the disparities in our society.”

America’s policies are almost entirely responsible for HIV falling into these fault lines. As epidemiologists look toward likely scenarios for the future of the coronavirus, they are already seeing the same decisions — and the same outcomes — on the horizon.

“A lot of HIV researchers are exasperated,” said Greg Millett, the vice president and director of public policy for the Foundation for AIDS Research. “We’re old enough to have lived through the HIV response, and we’re watching the same mistakes taking place with COVID.”

American Health Care Is Failing To Treat HIV
In the early days of the AIDS epidemic, researchers saw the virus as a problem of individual behavior, said Steffanie Strathdee, an epidemiologist at the University of California San Diego School of Medicine and author of “The Perfect Predator.” Men who had sex with men, went the conventional wisdom, refused to wear condoms, and drug users refused to use clean needles.

Over time, however, social scientists discovered that these behaviors were the product of larger economic and social forces. Many gay and bisexual men didn’t have access to HIV testing and went years without knowing their status. Many drug users couldn’t afford clean needles or lacked safe places to shoot up. Police harassment drove sex workers deeper into the shadows.

“You can’t just tell people to reduce their risks,” Strathdee said. “You have to change the conditions that put them at risk.”

But despite epidemiologists’ recommendations to adopt a harm-reduction approach, American politicians have refused to change the broader social conditions that increase HIV risk — and it shows. In 2018, the United States had 15,820 HIV-related deaths, 10 times more than Britain, Germany and France combined. The entire European Union, with a population one-third larger than the United States, had just 2,900 AIDS deaths.

This disparity arises from the same inequalities that are now appearing as important vectors for COVID-19. The average person with HIV waits three years before getting diagnosed, a delay primarily due to a lack of access to health care. After diagnosis, many patients delay getting antiretroviral treatment because of the astronomical cost. Even after starting treatment, many patients stop because they lose health insurance or are too far from a clinic to make it to regular checkups.

These barriers have created a medical system that leaves an alarming percentage of patients without care. In much of Western Europe, over 95% of HIV-positive adults have a suppressed viral load, meaning that they can expect to have a lifespan roughly the same as the general population. In the United States, the rate is just 53%.

And this shortfall has nothing to do with a lack of treatment options. Effective antiretroviral medications have been available since the mid-1990s. Pre-exposure prophylaxis, a pill that prevents HIV infection if taken regularly, has been on the market since 2012. But many Americans don’t have access to those treatments.

“It’s the nature of our society,” Baeten said. “As soon as a disease goes from being a biological problem to a human problem, that’s when you start to see the disparities.”

COVID-19 Is Starting To Look Like Other Diseases Of Inequality
The coronavirus pandemic is already starting to replicate HIV’s transition from a generalized epidemic to one experienced mostly at the margins.

America’s political shortcomings are beginning to overshadow biological explanations for the pandemic’s disparities. In the early days of the outbreak, researchers speculated that people of color may be disproportionately affected due to higher rates of underlying conditions, such as diabetes and asthma. But in a study published in May, Millett and his co-authors found that overcrowded living conditions and the lack of health insurance were better predictors of Black COVID-19 rates than any pre-existing health conditions.

“It’s the same as HIV,” Millett said. “We spent years asking, ‘What are these communities doing that’s putting them at higher risk?’ We eventually found that infection disparities by race were not because of individual behavior but because of social determinants.”

In another parallel with HIV, the development of COVID-19 treatments may not alleviate these disparities. Even if researchers develop an effective vaccine, it could cost patients thousands of dollars out of pocket. Distribution may be limited to those with health insurance. Or, like the flu vaccine, coronavirus prevention drugs may require regular booster shots. All of these barriers would keep poor and minority populations from receiving adequate treatment.

“People used to say that if we had effective treatments for HIV, we could end the epidemic,” Millett said. “But we have the treatment and the epidemic is still with us.”

Tackling COVID-19 Means Tackling Health Care Disparities
Numerous other conditions, from maternal mortality to hypertension to opioid addiction, trace the contours of America’s economic disparities. Many of the conditions killing Americans at elevated rates are related to what researchers call “syndemics”: overlapping, self-reinforcing health deficits that concentrate in poor and minority populations.

The good news about syndemics, though, is that they can be alleviated by policies that attack their root causes. It may not have seemed like an HIV intervention, but the Affordable Care Act increased testing rates in states that used the law to expand their Medicaid programs, an effect that was most pronounced for Black patients. In the years after the ACA’s passage, the number of people with HIV on Medicaid nationwide increased by 33%.

Other social policies can also affect syndemic diseases. A global review of 33 studies found that workers who received larger welfare payments reported fewer mental health problems after losing a job. In America, laid-off workers in states with generous unemployment benefits were more likely to see doctors and get cancer screenings during the Great Recession. Various studies have found that raising the minimum wage could reduce suicide rates, prevent premature births and decrease smoking.

All of this indicates that America may be limited in what it can achieve by fighting the coronavirus without addressing the country’s underlying inequalities. As the last 25 years of HIV research demonstrates, interventions aimed at a specific disease may eventually stall as patients confront the insurmountable barriers of access to health care and the cost of treatment.

That’s why, said Boston University epidemiologist Julia Raifman, the most urgent interventions to halt the spread of COVID-19 may not look like they have anything to do with infectious disease.

“The policies that will have the greatest implications for health will be renter relief, food assistance and unemployment insurance,” Raifman said. “If people are kicked out of their homes and receiving less financial assistance, they’re going to end up homeless and potentially exposed to COVID because it’s difficult for shelters to maintain distancing.”

Just as America has repeated the mistakes of its HIV response, it could also repeat its successes. The HIV epidemic revolutionized public health campaigns; the lessons learned from condom distribution efforts could be applied to face masks. In the 1990s, queer activists lobbied the Food and Drug Administration to speed up approval processes for lifesaving drugs. Many of those processes are now being used to fast-track COVID-19 treatments.

“But at the same time,” he added, “I’m disappointed because we keep having to fight the same fights.”

Incoherent Memories: My Mother’s Heart Attack, Covid-19, and Lessons from My Experience