Like Tess Holliday, I’m Fat And I Just Want To Live My Damn Life 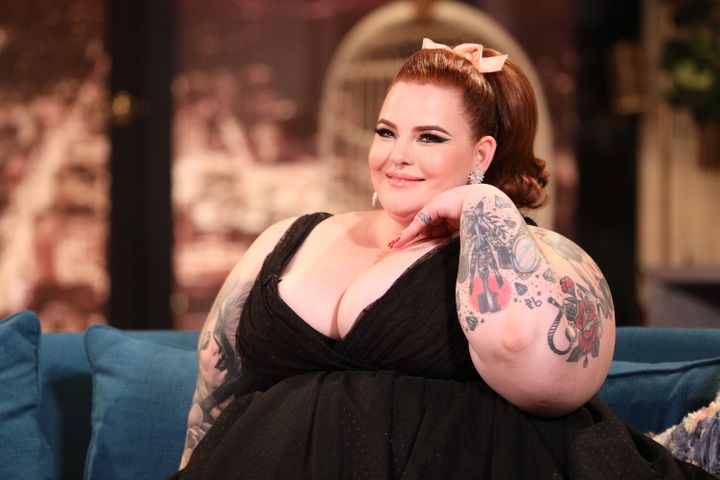 I am in bed with my husband and our dog, both of whom are sleeping soundly. I, on the other hand, am wide awake thanks to chronic insomnia. I try to zone out by scrolling through Instagram, when I see a post from the plus-size model and activist Tess Holliday. She’s shared a series of screenshots of a recent Twitter thread she started about how exhausted she is from dealing with fatphobic bullshit for over a decade.

“It would be cool to have just one day where hundreds of people don’t tell me how much they hate me or how disgusting I am,” she writes.

She talks about how hating fat people is essentially a hobby in the U.S. (though it’s hardly limited to this nation), and how because of this, all of her successes in her professional or personal life are constantly diminished by people.

As I read her words, I feel a rush of understanding. My emotions are jumbled, but I try to find the words to show my support and empathy. Finally, I write: Fwiw [for what it’s worth], you’ve made a major difference in my life and in the lives of so many others I know. I know it’s exhausting to be fat in this world and being a public figure, it’s bound to be worse.

I have a small online platform. I am not a “public figure” by any means, though I am “public,” and I do write about my life as a fat person (including in another HuffPost Personal piece published earlier this year.

I knew when I started to write about my experiences as a fat person just trying to live her damn life, I’d be subjecting myself to this kind of BS, and I was not wrong. The comments on my HuffPost piece itself were particularly rough, with very few people stepping in to show support. I ignored most of them but tried to respond to some people who seemed to perhaps be misinformed or even genuinely curious. I especially tried to engage with the people who posted positive comments. Eventually, though, it became too exhausting.

Most of the assholes had clearly not even read what I wrote in its entirety, so what was the point of trying to engage them? As strong as I may be, I’m not invincible. My mental health is something I’ve worked too hard on to sacrifice it to trolls.

As I laid in bed unable to sleep, I kept thinking about Tess’ words. The reality is, one doesn’t have to be a public figure to be subjected to this kind of hatred or scrutiny. Every fat person who lives in a thin-centric, diet-obsessed culture will endure some degree of this.

The more we defy cultural norms, the more we challenge the status quo and dare to simply live our happiest, diet-free lives, the worse it gets. Clearly, we’re all supposed to be good fatties, trying to shrink ourselves to fit the world’s standards! Otherwise, we deserve to be victims of hatred and abuse, for doing nothing other than living our lives in a body you don’t like.

The words of strangers have never had much bearing on my life or mental health. I’m lucky to be hardwired to not really give any fucks. Even my classmates who bullied me when I was a kid, right down to the girl who didn’t want to walk next to me (because ew, fat) in our 8th-grade graduation didn’t really bother me so much as they bemused me.

Here’s what did bother me.

I am a very small child and I hear everyone in my mother’s family belittle my very fat father. My mother’s family has real reasons to dislike my father. But all they say is that he’s fat. He broke a (very old) couch. He ate all the mashed potatoes on Thanksgiving. I’m not even five years old and have learned that being fat is a terrible thing. I am told constantly how I look just like him. In my mind, that means I’m also bad. I start to fear breaking chairs or falling through floors.

I am eight years old and put on my first diet by my father’s biggest critic, my mother’s older sister Jayne. She makes sure I know she doesn’t want me to be like my father: a big fat loser. The diet is the catalyst for my eating disorders (ED), which haunt me to this day.

I’m 13, and I have some black hairs on my belly. They upset me, because when do we ever see women with body hair anywhere, let alone on their bellies? I show Jayne. She tells me I am “turning into a man” because my “hormones are out of whack” from gaining weight. In reality, I have polycystic ovarian syndrome (PCOS) and this was one of the earliest manifestations of the condition. She doesn’t suggest anyone take me to a doctor. I would go undiagnosed for another decade-and-a-half and ultimately be unable to have children (complicated by endometriosis).

I’m 14, and my friend Toni has tried to set me up with a guy whose name I can’t remember. We talk on the phone for hours, and he tells me he loves me. We arrange to meet in person. He knows I am fat (though neither of us use that word, as it’s taboo to call yourself fat!). She goes with me to meet him. He takes one look at me and literally rides away on his bike without saying a word.

I am 15 and in the hospital for depression, suicidal thoughts and an ED. The therapists are insistent that my “fatness” is a “shield” of some sort. That I’m fat on purpose. That it’s because I want to “hide” my body ― my real body, that is. The thin one hiding under the fat I’ve forced upon it. They refuse to believe I haven’t been sexually abused. I must have used food to force the memories down.

It does not occur to them that I am fat because of a hormonal imbalance, because of genetics or because I’ve spent almost half my short life yo-yo dieting. I am just a few weeks out of treatment when the social worker I hate, and have been forced to see for several years, says, “So when are we gonna start to see some of the weight come off you?” I never go back to her.

I’m 20 and have been talking to a guy I met on a telephone dating line. We get along great. We agree to meet in person. I think he’s sweet and, bonus, he’s gorgeous. We make out for two hours. He tells me he wants to lose his virginity to me and I’m flattered. I’m excited… until he makes it clear I can never meet his friends. That they wouldn’t understand. Because, fat girl. I don’t sleep with him because as insecure as I am, somehow I realize he doesn’t deserve to lose his virginity to me.

I’m 22 and dating Thomas, whom I’d later marry. He falls in love with me, despite not wanting a serious relationship at the time. He doesn’t care that his friends won’t understand (though he acknowledges that they won’t) because he actually loves me. All of me. I will spend years in therapy trying to reconcile the trauma of my past… to believe I am worthy of his love. Almost 22 years later, it’s sometimes still a struggle.

I’m 25, living in NYC, and some random stranger screams out his window, “What’s in the bag, fatty? Ice cream?” And I cringe, because it is what’s in the bag. Ice cream I’ve been saving my Weight Watchers “Points” for all damn week long. Ice cream I plan to share with Thomas. I still flip him off. I don’t remember if I ate the ice cream.

I’m 28 and a newlywed. I’m half-naked on an exam table getting a transvaginal ultrasound to confirm PCOS. The specialist chooses this moment to tell me if I ever want kids I should have weight loss surgery. He hasn’t even formally diagnosed me yet.

I’m 35 and have commented on a Mary Lambert video, defending her against trolls. One tells me my husband must be gay because he clearly can’t actually want or love me. Another tells me to just kill myself and spare my family the misery of my inevitable early death, which seems contradictory, but… OK.

I could keep going, but I have a word limit.

All I want is for the world to let fat people live our damn lives in peace. Don’t try to steal our successes. Don’t doubt our lovers want us.
Every fat person in our culture has experienced this kind of trauma. Its impact may vary, depending on the source and where we are in our relationships with our bodies at the time, but it’s still abuse. It’s still hard. It’s still inexcusable bullshit.

All I want is for the world to let fat people live our damn lives in peace. Don’t try to steal our successes. Don’t doubt our lovers want us. Don’t make assumptions about our dietary habits or health. Don’t try to erase our existence. Don’t diminish our pain. Don’t doubt our lived experiences, and don’t presume to know you understand a single fucking thing about being fat if you’ve never actually been fat.

Furthermore, if you have been fat but now aren’t, don’t assume that because x thing “worked” for you that it will work for everyone. That’s not how bodies work. Believe me when I say that I tried everything ― including stomach amputation ― and I’m still fat.

No one owes you thinness. No one questions the idea of being “naturally” thin, so why is the idea of being “naturally fat” so hard to accept? I’m done fighting my body, because my mental health matters more. Because I want to just LIVE my life, not obsess about every morsel of food I put into my mouth. Because it’s hard enough to live with an ED without you projecting your fatphobic bullshit on me.

Because, just like Tess Holliday, I am fucking exhausted.

So for Tess ― and every other exhausted fat person ― I am asking you to please just stop. I’m not asking YOU to be fat. I don’t give a shit what size your body is, what you eat or how healthy you actually are, because I don’t measure the worth of a person based on any of these factors.

However, I will measure your worthiness based on how you treat fat people. And as Tess says, “if you can’t be nice to a fat person, you’re the pig, not us.”

Incoherent Memories: My Mother’s Heart Attack, Covid-19, and Lessons from My Experience