I Have A White Boyfriend. Does That Make Me Any Less Black? 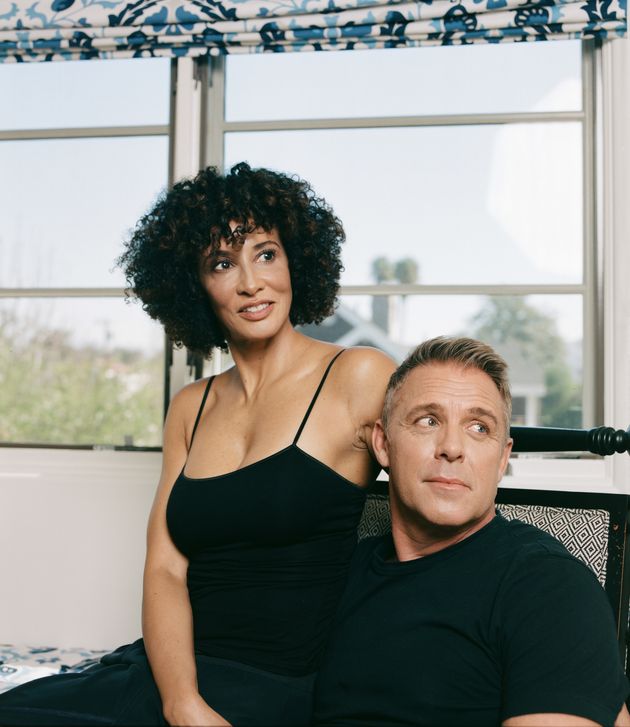 My boyfriend is white. But he’s not just white ― he’s blond-haired, blue-eyed white. I’m talking alternative music-loving, Dave Matthews Band-singing, rock-climbing, surfer boy white. There is no ignoring his whiteness or mistaking him for anything other than white.

I fell in love with Scott 12 years ago in an Arizona drug and alcohol treatment center. His whiteness seemed unimportant then, charming even. Behind closed doors, we let each other in on our own cultural secrets.

I taught him about how to handle the delicate curls at the nape of the necks of Black women. Explained what it meant to throw shade and made him watch Black movie classics like “Superfly” and “Boomerang.” He regaled me with tales of fly-fishing in Wyoming, made me watch the documentary “Free Solo,” and introduced me to the music of soul rocker Michael Franti.

The more I got to know him, the more I understood in my core that I needed to be with him. He was good for me. He was kind to me, and most importantly, I liked who I was when I was with him.

But there was a caveat to our happily ever after. Being with him meant letting go of the Black relationship ideal I’d been harboring since I asked my father to marry me at age 4. The idea that while Scott and I would share a life but would never share Blackness made me wistful, like I was giving up something that I might one day miss.

And now Black people are having a moment. In sports, we are kneeling and linking arms in Black Lives Matter T-shirts. Postmates, Netflix and Hulu are amplifying Black films and TV shows 24/7, and it’s not even February. Everywhere you look, Black folks are gathering to support one another, to protest together, to mourn together. And while people of all races participate in these rallies and vigils, it is an especially remarkable time to be Black. For never in American history have we collectively been more empowered or valued.

But lately, I’ve had fits of self-doubt whenever I sit down at my computer. Can I continue to write impactfully about the Black experience when my boyfriend is white? Can I properly protest the treatment of Black Americans with him at my side? Does my white boyfriend diminish my Blackness?

Back when we could all gather in person, I started to notice something at Black get-togethers. Arriving by myself, I felt every inch a Black woman, mother, Black culture writer and podcaster, a long-time Black voting rights activist. But when I walk into those same spaces with Scott, it feels like there is an extra bright spotlight on his whiteness. There have been times when, without provocation, I’ve found myself wanting to defend our love to the people around us.

Back in the ’90s, I was the one my friends referred to as “militant” because I was known to throw low-key shade at my friends who dated white men.

“Do you really want to be responsible for the further dilution of our race?”

I just knew that my future husband and I would be the poster children for Black love. It did (and does) my heart good to see Black people together, Black families, Black children. I love the caramel and velvety shades of our skin and curl and kink of our hair. I love our music, our art, our films and our food. I love everything about the cookout.

In my 20s, I dated Black man after Black man, yearning for a romance like Justice and Lucky in “Poetic Justice” or Darius and Nina in “Love Jones.” But after my fifth or sixth breakup, I began to wonder if such a love existed in real life. Everything looked the way I’d pictured it, Black friends, Black clubs and restaurants, Black double dates, Black concerts. But the reality was that the longer I stayed in each relationship, the more keenly aware I became of how unrealistic my expectations were. I thought that our Blackness would give me everything that I was looking for. I thought our Blackness would be enough.

While grieving each broken relationship, I wondered what it was that I was missing. All around, my Black girlfriends were marrying their Black boyfriends, and I was growing impatient, waiting for mine. So when I met a white man at age 27, you could have knocked me over with a feather, especially when he and I fell in love and got married.

And now, a divorce and two beautiful biracial children later, I’ve gone and fallen in love with another white man. Over the years, I thought I’d let go of my old ideas about the intersectionality of love and race. But three weeks ago, I got a seven-word DM from an admirer that sent me into a tailspin:

I checked out his profile and saw that he was an older, brown-skinned brother named Ronald. I felt my face get hot as I thought about how to respond.

I wanted to clap back at Ronald and tell him how wrong he had me, that I am so much more than someone who “only likes white guys.” I wanted him to know that I’m a lifelong hip-hop head, that I come from a proud Black family, and how many beautiful chocolate men I’ve dated. But I stopped typing mid-DM, closed my eyes, and took a few deep breaths to slow my heartbeat.

You don’t owe this brother anything.

This isn’t about a stranger trying to hit on me with some backhanded observation. The feelings of anger, guilt and betrayal I’m struggling with are from an old, stuck place. They are from the fantasies of a kid whose for-real goal was to be Nia Long’s character in “Love Jones.” The idea that I am somehow less legitimately Black because I am with a white man is not only erroneous but hurtful. Does my boyfriend being white erase the fact that I’ve been the token Black girl since kindergarten? Does being with a white man mean that I get a pass when it comes to bigotry or the thousands of microaggressions I’ve had to endure?

How do you get your hair like that? You’re so pretty, I don’t even think of you as Black. Or, you speak so articulately!

I’ve been registering people to vote in Black neighborhoods since I was a teenager and supporting social justice policies for my entire adult life. No matter whom I’m linked with romantically, I have never stopped calling for change, marching for justice or attempting to amplify the voices that need to be heard.

Intellectually, I know that being with a white man doesn’t change a thing about who I am and what I stand for and yet…

This is how the well gets poisoned.

One minute I can be totally fine with my life exactly as is, and then one DM later, I see my life through the eyes of an outsider. I fight off feelings of guilt as I realize that I’ve allowed a third person to come in and skew my perception of Scott. Any energy that I give to this idea that my relationship is something to defend rather than cherish could hurt this sweet man that I love.

I waited another day and then wrote back to Ronald.

“Yes, you’re right. I only like white boys,” I typed, and then I promptly blocked him.

But the next time I sat down at my keyboard, I silently thanked Ronald for what I’d learned from my experience with his little, insulting DM. I’ve decided not to let those societal chains he was trying to throw on me confine or define me. I am a Black woman in love with a white man, but regardless of what folks may see, that’s not the totality of our story.