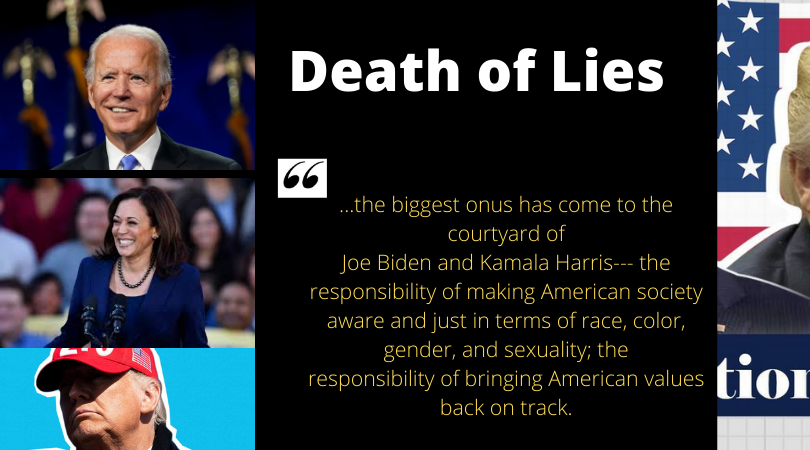 The final results of the American presidential election are in. Joe Biden has been elected as the president of the United States of America for the next four years. Along with this, the defeat of Donald Trump, whom the whole world watched as a butt of jokes, has become apparent. The election results have sent a public backlash against racism, Donald Trump and people with Trump like attitudes, and people who belittled American values and enjoyed lies. With that, a big responsibility has come to the realization of Joe Biden and Kamala Harris. The result has proved that to be the president of the United States of America is not to act with hubris and braggish, not to be irresponsible, not to tell lies, and not to be a racist supremacist.

Trump, before he became the president, continued making promises and lies. He said he would build a wall on the Mexican border, deport illegal immigrants from America, and bring policies that won’t let immigrants enter America easily. He continued boasting and bragging about himself in each and every primary and rally. Not only this, he even exerted his misogynistic stance against Hillary Clinton and a few other women, plus his racist attitudes that had, to our surprise, brought him to the winning of the presidential race based on the number of electoral votes although Hilary Clinton had outsmarted him in the number of popular votes. Thus, the election results had shown us a real countryside America behind the scene. America, a glorified country and as considered to be well advanced in the field of science, technology, economy and infrastructure, displayed American people’s level of awareness in terms of race and gender. Trump, no doubt, had received some votes from those who were tired of politicians, and some Black people and immigrants who had illusions and disillusions in the lies of Trump. Like Abraham Lincoln said, he had managed to fool some of the people.

Knowing those tactics, Trump continued to canvass and gaslight the American people—telling lies and ruling the country. He lived on conspiracy theories and continued to project on himself a good character. He admired those who admired him, and he, loathed, tweeted and even fired those who criticized him. Nothing deterred him—neither a video that displayed him as vulgar, nor other criminal activities he appeared to be involved in. While all his partners in the past, such as Jeffrey Epstein— or you name it—were detained for their criminal activities, and he behaved like he never knew them. He hired all his people at all levels—from executive to judiciary— and remained bragging about his “good deeds” and “increasing economy” that merely remained a chimera. Even the impeachment couldn’t shove him. He continued injecting the seeds of racism and police brutality deflecting American values. He even didn’t hesitate to say that he’s ‘the greatest president to the Black community since Abraham Lincoln.’ He continued hiding the truth he knew even if the Corona virus was killing hundreds of thousands of people. Slowly, even those who called themselves Whites couldn’t digest Trump’s lies. And now, even if some Black people and immigrants, who cannot understand Trump’s lies, like him, it’s been proven that the lies do not last. The election results have proved it.

Trump has made a bad image in the history of American presidents, but he doesn’t care about that. And it is all because he had never anticipated to be the president of the United Stated of America. No matter what, he will always be bragging about that, perhaps even in his graveyard. The whole world will recognize him as a tax avoider and a lying bragger. On that note, where he will end up is what the future will hold. But, this time, the biggest onus has come to the courtyard of Joe Biden and Kamala Harris— the responsibility of making American society aware and just in terms of race, color, gender, and sexuality; the responsibility of bringing American values back on track.

Let’s all learn the lesson and never let the fire of democracy be snatched away by Trump like people who are always looking for the window of opportunity to jump in.