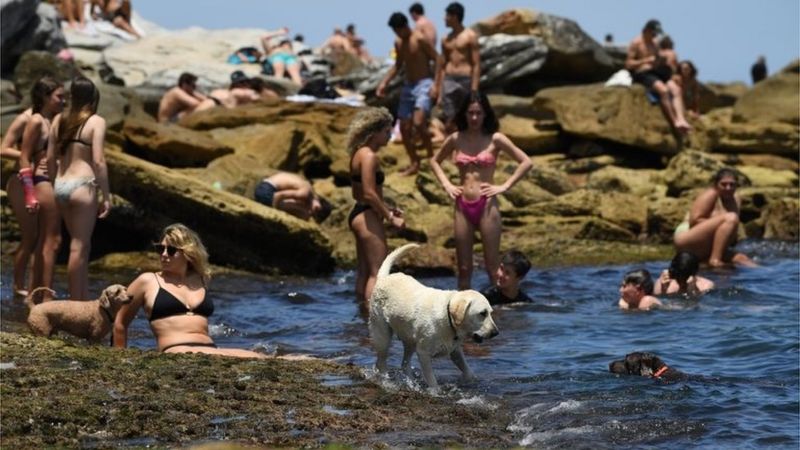 Sydney has recorded its hottest November night on record, with daytime temperatures of 40C expected on Sunday.

The Australian city recorded a minimum overnight temperature of 25.4C.

The heat has prompted the New South Wales (NSW) Fire Service to issue a total fire ban for most of the eastern and north-eastern parts of the state.

Firefighters are battling dozens of wildfires in the state. Temperatures over the weekend have also soared in other parts of the country.

These included South Australia and Victoria.

It is the first weekend of significant bushfire activity since the end of last year, which saw Australia’s most intense bushfire season on record, though not its most deadly. The bushfire season of 2019-20 saw fires sweep across 24 million hectares of land.

The blazes affected every Australian state, destroyed over 3,000 homes, and killed or displaced nearly three billion animals. At least 33 people were killed.

Sydney’s record temperature was recorded at Observatory Hill in the Central Business District. By 04:30, the temperature had risen back up to 30C, the Sydney Morning Herald reports.

Images from Sydney show huge crowds of people flocking to the beach.

The New South Wales health department has reminded people to keep to social distancing regulations in order to stop the potential spread of coronavirus.

The Bureau of Meteorology has predicted a five or six-day heatwave in parts of northern NSW and south-east Queensland.

The Rural Fire Service (RFS) has warned of a “very high to severe fire danger forecast” in eastern and north-eastern parts of New South Wales.

There are currently 45 bush and grass fires burning in the state. One blaze is threatening homes in the west of Sydney.

“This is the first time since the devastating season last year we’ve seen widespread elevated fire danger,” he said.