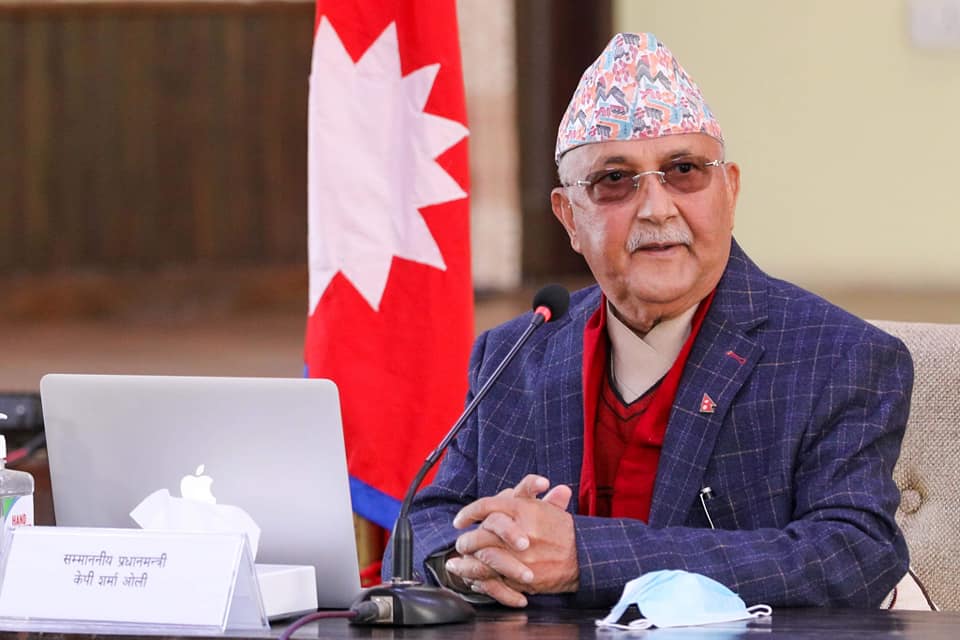 Prime Minister KP Sharma Oli has made public progress details of his three years in the government. This took place at a function organised at Mulchowk right after the inaugural programme of Singha Durbar building reconstructed after it was damaged in the 2015 earthquake.

On the occasion, PM Oli defended that he had to dissolved the House of Representatives and announce mid-term elections after his two-thirds majority government was obstructed from sssssssworking. Hurdles were created in appointing office bearers of constitutional commissions for the past three years and in approving many bills presented at the parliament three years ago, he maintained.

“I for the past years tried to shift difficulties having endured accusations so as not to go for elections before normal timeframe. I continuted my efforts until 2 pm on December 20 to convince leaders attacking the government or trying to replace it through different ways by accusing PM and chair of Nepal Communist Party of criminal offences by a group belonging to the coalition government, and change the situation.” It was appropriate to go for elections so as to prevent the remaining tenure of the lower house from turning into ‘a sports ground of political instability’, he opined.

Highlighting the major achievements of the government over the last three years, Prime Minister Oli mentioned the implementation of constitution and federalism; putting in place the necessary policy and legal arrangements and preparation of the institutional and physical infrastructures for that purpose; the encouraging overall economic situation; the rapid progress made in the post-earthquake reconstruction; and the encouraging progress made in the education, health and social security sectors.

In this connection, the PM stated that the size of public spending has increased nearly 29 per cent and the size of the public budget too has grown by Rs 186.64 per cent. The per capita income has increased by 23.6 per cent (from 887 USD to 1,097 USD). More than 900 thousand people have been taken out of the absolute poverty line. If there weren’t COVID-19, this number would have crossed 1.5 million.

He said the UN Human Development Report shows that the HDI has increased by more than 5 per centage point, the poverty has not increased and there is no hunger in Nepal.

PM Oli said the insurance service has expanded by 8.7 per cent and the revenue mobilization has reached more than Rs 100 billion. The inflation has not crossed 5 per cent despite the COVID-19 pandemicdisturbing the supply chain and system globally.
He maintained that Rs 1,045 billion grants have been provided for the development of the provinces and local levels.

PM Oli also mentioned the reconstruction of the Ranipokhari as one of the achievements. He added that 559 thousand 461 private houses damaged by the 2015 Gorkha Earthquake have been rebuilt and that 95 per cent of the quake-damaged government buildings have been reconstructed.

Similarly, 5498 kilometres road has been constructed in the last three years in the country despite the adverse impact of Coronavirus pandemic.

The Tarai-Madhes Prosperity Programme has been expanded and 1,080 community houses and 440 community infrastructures have been constructed under this.

According to the PM, the production of major cereal crops has increased by 11.2 per cent, that of fish and meat by 20 per cent, that of milk by 19 per cent and that of vegetable by 9 per cent. Irrigation has been expanded in the Tarai Madhes to more than 30 thousand hectares in the last three years.

School enrollment rate 93 %, literacy rate reaches 85%
The government has, despite the year-long COVID-19 pandemic, achieved significant progress in education and communications sectors in the past three years.

During the last three years, the net enrollment rate in basic level ( class 1-8) has reached 93.4 percent from 92.3 and this rate in the secondary level (class 9-12) has jumped to 47.6 percent from 43.9 percent. Similarly, the literacy rate above six years has increased from 78 percent to 85 percent and the CTVET schools have reached 292 local levels and their total number has reached 1,042 from 570. According to the government, 65,497 people are trained from such schools.

The Prime Minister during his address on the occasion of the completion of three years in the office today said the government was committed to the ‘ A World Ready to Learn’ , the UNICEF’s global report.