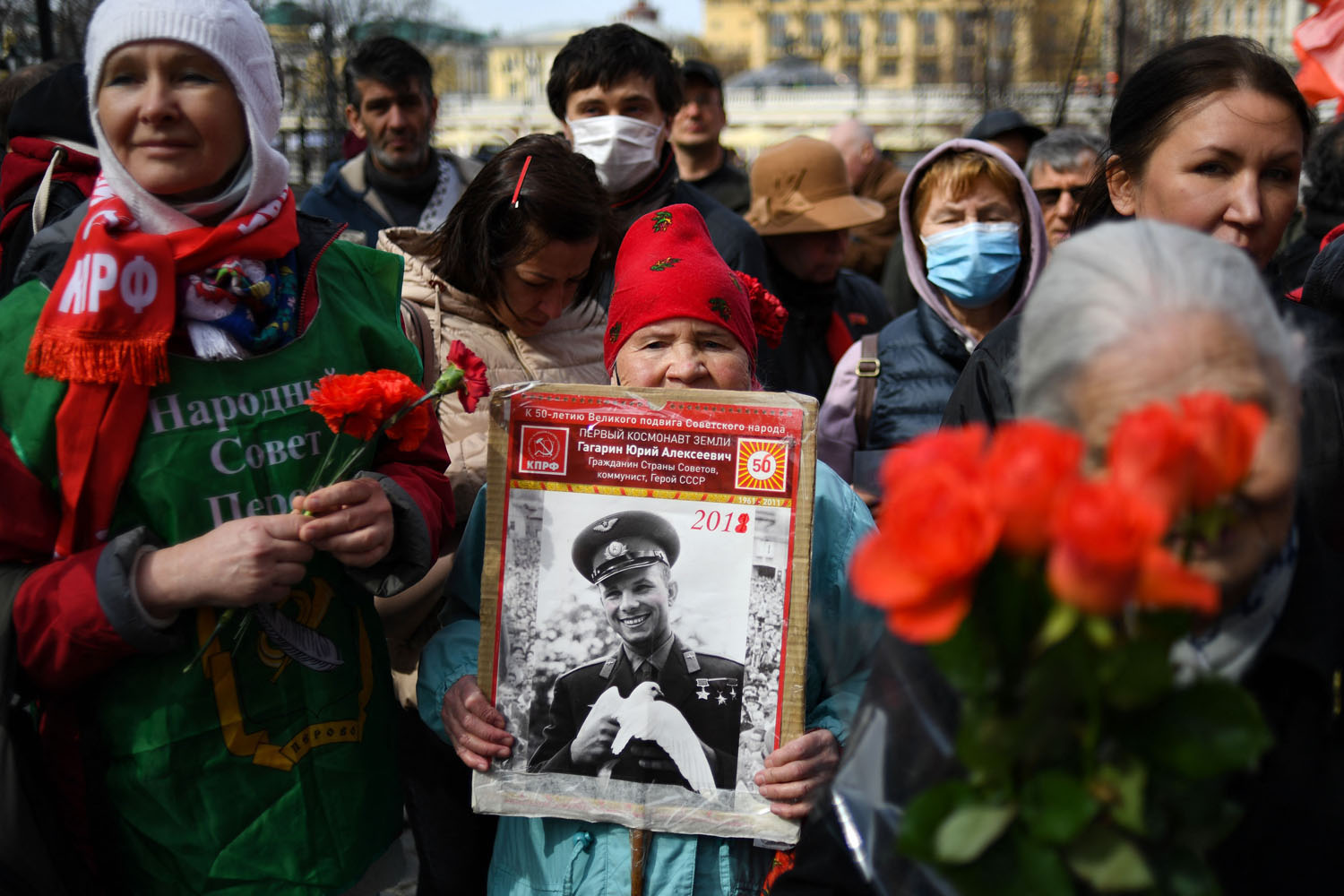 Russian Communist party supporters holding flowers and a portrait of Soviet cosmonaut Yuri Gagarin, the first man in space, gather by Red Square prior to a flower laying ceremony at the grave of Yuri Gagarin by the Kremlin wall on the 60th anniversary of his flight, in central Moscow on April 12, 2021. (Photo by NATALIA KOLESNIKOVA / AFP)

MOSCOW – Russia on Monday celebrated the 60th anniversary of the legendary flight that made Yuri Gagarin the first man in space, a major source of national pride for millions of his countrymen. Russia’s space industry has struggled in recent years and been hit by a series of mishaps, but the sending of the first human into space on April 12, 1961 remains a crowning achievement of the Soviet space programme.

President Vladimir Putin was to travel Monday to the southern city of Engels on the banks of the Volga River, to the site of the cosmonaut’s landing where a memorial stands to honour the historic flight.
The day of Gagarin’s flight is celebrated every year in Russia as Cosmonautics Day, and this year authorities are pulling out all the stops to mark the 60th anniversary, with museum exhibitions, round-the-clock television coverage and events across the country.

For Moscow commuters, Monday morning started with a broadcast on the Metro of the original report by state news agency TASS about the launch, followed by Gagarin’s legendary words — “Poekhali!” (Let’s go) — as his Vostok spacecraft lifted off. In a message from the International Space Station, the four Russian cosmonauts on board saluted “all earthlings” and hailed their compatriot’s accomplishment.

“Gagarin’s legendary 108-minute flight became an example of heroism for his successors, including us,” said cosmonaut Oleg Novitsky. Vostok took off carrying the 27-year-old Gagarin from the Baikonur cosmodrome in Kazakhstan, then part of the Soviet Union.
The flight lasted just 108 minutes, the time it took to complete one loop around the Earth, before returning to home soil.
The now-rusty Vostok capsule is on display at Moscow’s Museum of Cosmonautics where a new exhibition dedicated to Gagarin is set to open on Tuesday.

– ‘Name that everyone knows’ –
Visitors will be shown documents, photos and personal belongings, some dating back to Gagarin’s childhood and school years.  “This is probably the only surname that everyone knows, from four-year-old children to people over 80,” Vyacheslav Klimentov, a historian and the museum’s deputy director of research, told AFP.
“Gagarin’s feat… bonds all Russians together.”

On Friday, a Russian Soyuz spacecraft honouring the anniversary of Gagarin’s flight blasted off from the Baikonur cosmodrome to deliver two Russians and a US astronaut to the ISS. Gagarin’s flight remains a symbol of the country’s dominance in space during the Soviet era. Four years before Gagarin, the USSR had become the first country to send a satellite into orbit, called Sputnik.

But the anniversary also comes at a difficult time for Russia’s space industry, which has suffered a number of setbacks in recent years, from corruption scandals to lost spacecraft to an aborted take-off during a manned mission in 2018.
Russia’s ageing Soyuz rockets are reliable and allow Moscow to remain relevant in the modern space industry, but the country is struggling to innovate and keep up with other key players.

In a major blow, Russia last year lost its monopoly for manned ISS launches after reusable rockets from Elon Musk’s Space X, carrying NASA astronauts, successfully docked at the space station.
In a video message released on Monday, the head of Russia’s Roscosmos space agency, Dmitry Rogozin, stressed that the USSR sent a man into space despite having lost “colossal resources” during World War II.
Rogozin has set a series of ambitious goals for Roscosmos in recent years, despite funding cuts to the space programme.

He said Monday that Russia was “on the cusp of very important changes” that will see next-generation spacecraft and lunar missions.
“We believe in our space, in Russian space,” he said.
Iran atomic agency says nuclear facility hit by act of ‘terrorism’
TEHRAN, April 11, 2021 (AFP) – Iran’s atomic energy organisation said Sunday the Natanz nuclear facility was hit by a terrorist act, hours after it said an “accident” had caused a power failure there.

The episode came a day after the Islamic republic said it had started up advanced uranium enrichment centrifuges at the site, in a breach of its commitments under a troubled 2015 deal with world powers.
Ali Akbar Salehi, the head of the Iran Atomic Energy Organisation (IAEO), condemned a “futile” act, while urging the international community to “confront this anti-nuclear terrorism”, in a statement carried by state television.
The attack was carried out by “opponents of the country’s industrial and political progress, who aim to prevent development of a thriving nuclear industry,” he said, without specifying what country or entity might be behind the alleged sabotage.
IAEO spokesman Behrouz Kamalvandi had earlier reported an accident at the enrichment facility caused by a “power failure”. No one was injured and there was no radioactive release, the official Fars news agency reported, citing the spokesman.
Kamalvandi said there had been “an accident in part of the electrical circuit of the enrichment facility” at the Natanz complex near Tehran. “The causes of the accident are under investigation and more details will be released later,” he added, before the later statement put out by the agency’s chief.
He did not say whether power was cut only in the enrichment facility or across other installations at the site.
– ‘Sabotage’ –
Malek Chariati, spokesman for the Iranian parliament’s energy commission, took to Twitter to allege sabotage.
“This incident, coming (the day after) National Nuclear Technology Day, as Iran endeavours to press the West into lifting sanctions, is strongly suspected to be sabotage or infiltration,” Chariati said.
Iran’s President Hassan Rouhani had on Saturday inaugurated a cascade of centrifuges for enriching uranium and two test cascades at Natanz, in a ceremony broadcast by state television.
An Israeli public broadcast journalist, Amichai Stein, said on Twitter “the assessment is that the fault” at Natanz is the “result of an Israeli cyber operation”, without elaborating or providing evidence to corroborate his claim.
Israeli Prime Minister Benjamin Netanyahu said later Sunday that “the struggle against Iran and its proxies and the Iranian armament efforts is a huge mission”.
“The situation that exists today will not necessarily be the situation that will exist tomorrow,” he added, without elaborating.
Netanyahu made the remarks during an event involving intelligence service Mossad and the army for Israel’s independence anniversary.
Iran’s president had on Saturday also inaugurated a replacement factory at Natanz, after an explosion at a facility making advanced centrifuges there last July.
Iranian authorities likewise blamed the July incident on “sabotage” by “terrorists”, but have not released the results of their investigation into it.
– Nuclear deal talks –
The equipment inaugurated Saturday enables quicker enrichment of uranium and in higher quantities, to levels that violate Iran’s commitments under the 2015 nuclear deal it agreed with the five permanent United Nations Security Council powers, plus Germany.
The administration of then-US president Donald Trump unilaterally withdrew from this multilateral nuclear accord in 2018 and re-imposed biting sanctions on Iran.

Iran later responded by progressively rolling back its own commitments under the agreement.
Trump’s successor Joe Biden has said he is prepared to return to the deal, arguing it had — until Washington’s withdrawal — been successful in dramatically scaling back Iran’s nuclear activities. Iran’s latest move to step up uranium enrichment follows an opening round of talks in Vienna Tuesday with representatives of the remaining parties to the nuclear deal on bringing the US back into it.
The talks are focused not only on lifting the crippling economic sanctions Trump reimposed, but also on bringing Iran back into compliance.

Iran’s nemesis Israel has always been implacably opposed to the 2015 accord.
In November last year, Iran’s top nuclear scientist Mohsen Fakhrizadeh was killed by machine gun fire while travelling on a highway outside Tehran.Iran’s elite Revolutionary Guards said a satellite-controlled gun with “artificial intelligence” was used in the attack, which Tehran blamed on Israel.Uranium enrichment can produce the fuel for a nuclear reactor, or in highly extended form, the fissile core of an atomic warhead. It is one of the most sensitive nuclear activities carried out by Iran.Rouhani had again underlined at Saturday’s ceremony that Tehran’s nuclear programme is solely for “peaceful” purposes.
(AFP)

Disability and Sex: Nepali Disabled Women Writers and Their Quest…