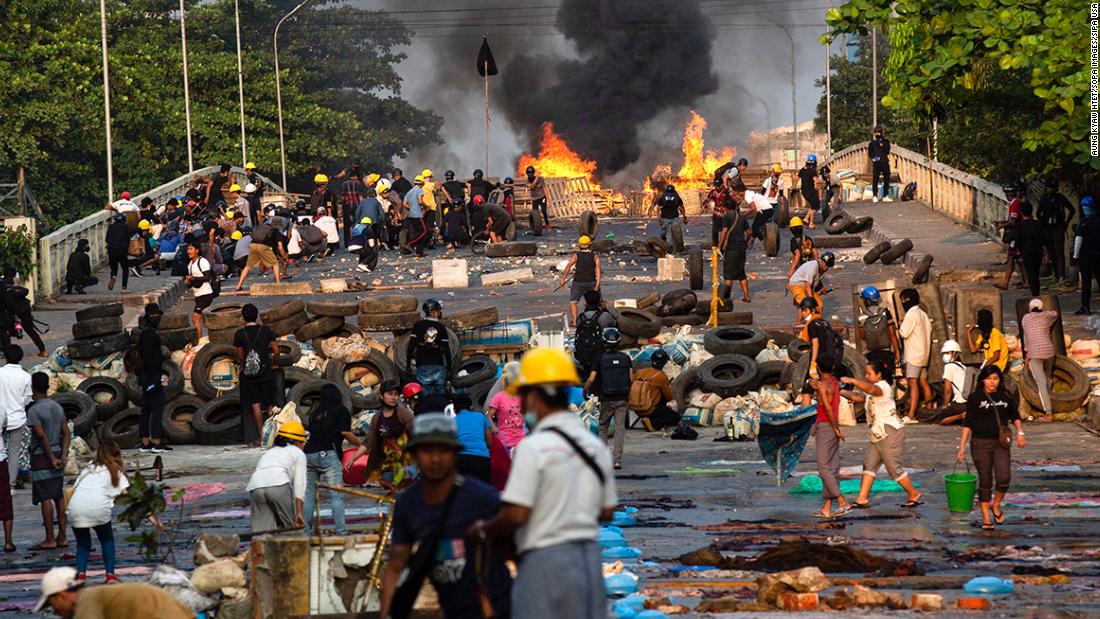 Chaotic scene of several makeshift barricades on a bridge to prevent police from coming with a burning barricade set on fire by the police during a demonstration against the military coup. Myanmar police attacked protesters with rubber bullets, live ammunition, tear gas and stun bombs in response to anti military coup protesters on Tuesday, killing protesters and injured many others. Myanmar's military detained State Counsellor of Myanmar Aung San Suu Kyi on February 01, 2021 and declared a state of emergency while seizing the power in the country for a year after losing the election against the National League for Democracy (NLD). (Photo by Aung Kyaw Htet / SOPA Images/Sipa USA)

The newly appointed ward administrator, who came to check the scene, was shot dead en route. His body was discovered with a gunshot wound to the head, Nikkei Asia reported. It remains unclear who was responsible for the explosions and the shooting, it added.

There have been no major pro-democracy protests on streets in the past three days, while bombings are becoming more frequent.The military has killed over 800 people and arrested more than 5,200 since the Feb.ruary 1 coup, according to the latest tally by the Assistance Association for Political Prisoners (AAPP) activist group.

On February 1, the Myanmar military overthrew the civilian government and declared a year-long state of emergency. The coup triggered mass protests and was met by deadly violence.

On April 24, Junta leader Min Aung Hlaing met leaders of the ASEAN in Jakarta where he was urged to immediately halt the “military violence” against protesters and to release detained civilian leaders.

US Secretary of State Antony Blinken said in a statement that the actions taken by the three countries underscore their resolve “to apply political and financial pressure on the regime as long as it fails to stop the violence and take meaningful action to respect the will of the people.”