We want to enjoy life, want to explore new territory, experience the pleasantness that the world has to offer, behold the beauty nature emanates, and want to come out of the shell and achieve vindication. 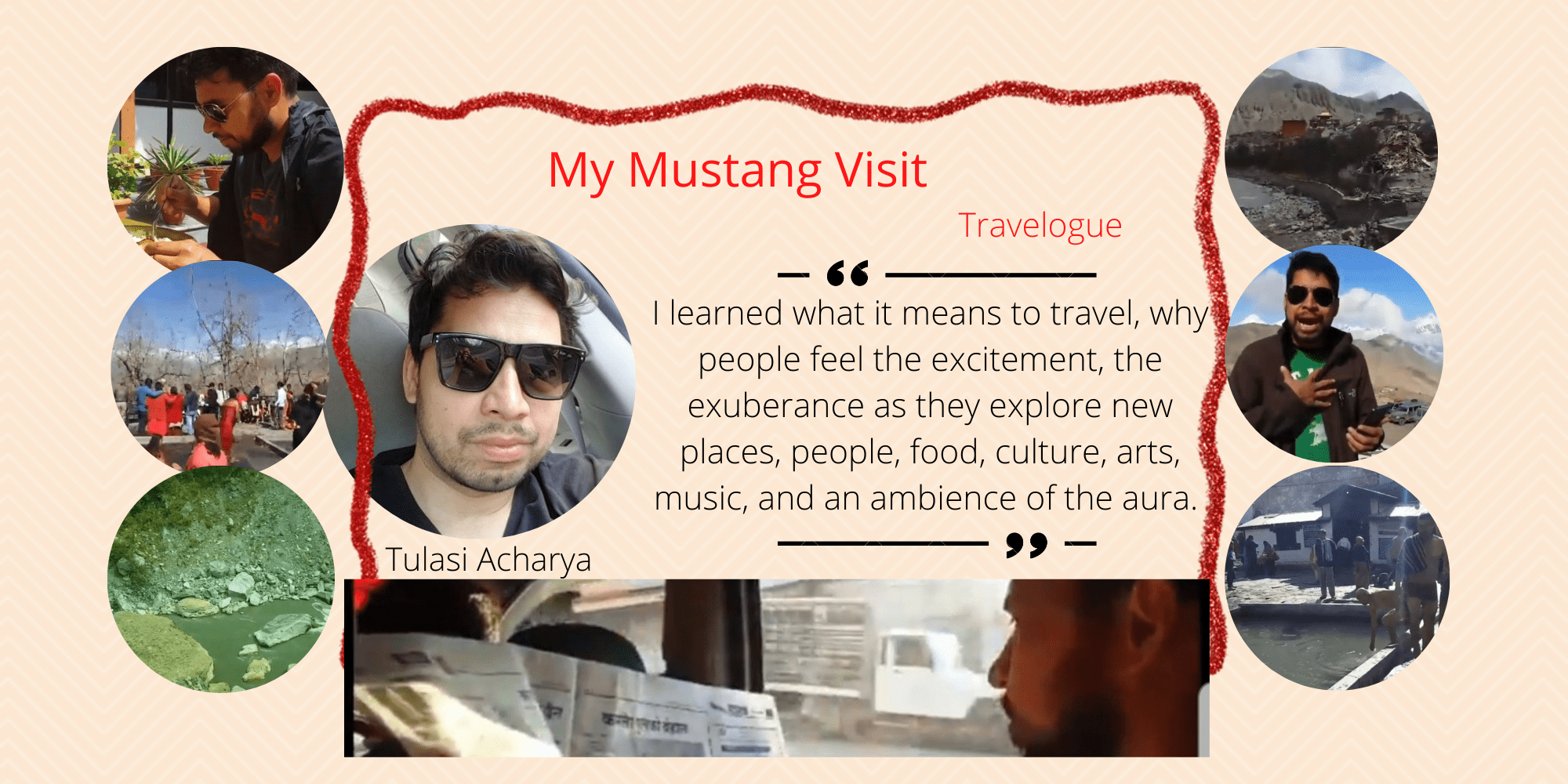 It was a pleasant morning, mid-March, mild, benign, perfect weather not different from the winter mid-afternoon in the plains. The sky was azure after the rain last night and the green shoots on the trees appeared sprouting indiscriminately. The soil on the land was moist. It was 6 am, the sun seemed to be throwing its glow from a distance where the land was stretched all the way out before me.

The taxi driver played a Nepali song “yo man ta mero Nepali ho,” meaning my heart is all for Nepal and continued driving north and west by the brim of the Seti river that flew in a serpentine way up and down.

A gulp of swallows flew past us and diverged and merged directions individually, creating imaginary routes of flying planes and again showed up in a group bringing a gush of morning air. This further inspired our energy as we were already on the way to Mustang.  My wife and I had embarked on our journey with our loaded backpacks. We took a taxi from Pokhara and headed towards Mustang via Benibazzar and Jomsom, two other wonderlands on the way.  The taxi driver played a Nepali song “yo man ta mero Nepali ho,” meaning my heart is all for Nepal and continued driving north and west by the brim of the Seti river that flew in a serpentine way up and down.

As we gazed out of the windows on the taxi on the other side, some beautiful terraces were being ploughed with yoked oxen. A forest bee zoomed into the windscreen pane and died right there fluttering. My wife’s eyes darted from side to side watching what was going on from either side of her speechless. I could not help watching what was happening around me. I sympathized with the bee, but the pleasure the morning and the journey gave me was enormous.

In no time, we arrived in Beni bazzar. From there, another river named Kaligandaki would begin on our way. We had a way furthermore to go to reach Mustang, also called a district that comes only after our taxi crosses and climbs steep roads that traverse snow-clad mountains. We continued. We reached the top of the mountains and looked down out of the taxi’s window, far below lay the deep gorges of Kali Gandaki with merely a thin line of blue water, which was most probably 1000 meters down from where we were.

On the other side appeared gigantic granite mountains that, looked as if they might topple at any moment and squash all of us. We immediately saw just how infinitesimal we were, our life no more than a speck of dust in this landscape with no hope. In front of the granite mountains on either side of us and the deep Kali Gandaki down below our bodies were frail and diminutive. We felt we were tiny forms of the energy that could expire and fall any time.

As the taxi was moving, the ideas drove its way through the maze of corridors in my own brain. We human beings were nothing more than a fluttering moth that could die while drawn towards a flame anywhere, nothing more than a bee that just died on the taxi’s windscreen fluttering. Mountains and rivers appeared so powerful that not only took our breath away but might take our breath literally.

Finally, we reached Mustang in the evening. I always used to watch snow-clad mountains up in the north and it was my first time I had to turn towards the south to see them. Snowflakes welcomed us no sooner did we reach there. A throng of tourists was clicking and capturing priceless and speechless beauty in camera, I was contemplating the journey back that we could have died any time like the bee if nature had become aggressive against us. I felt we won, felt victorious. I felt so powerful, but, I knew, that was a fragile feeling.

I learned what it means to travel, why people feel the excitement, the exuberance as they explore new places, people, food, culture, arts, music, and an ambience of the aura.  We are curious creatures, nor like other species that flutter around without any purpose or want to be fixed in a place where no one invades. We want to enjoy life, want to explore new territory, experience the pleasantness that the world has to offer, behold the beauty nature emanates, and want to come out of the shell and achieve vindication.