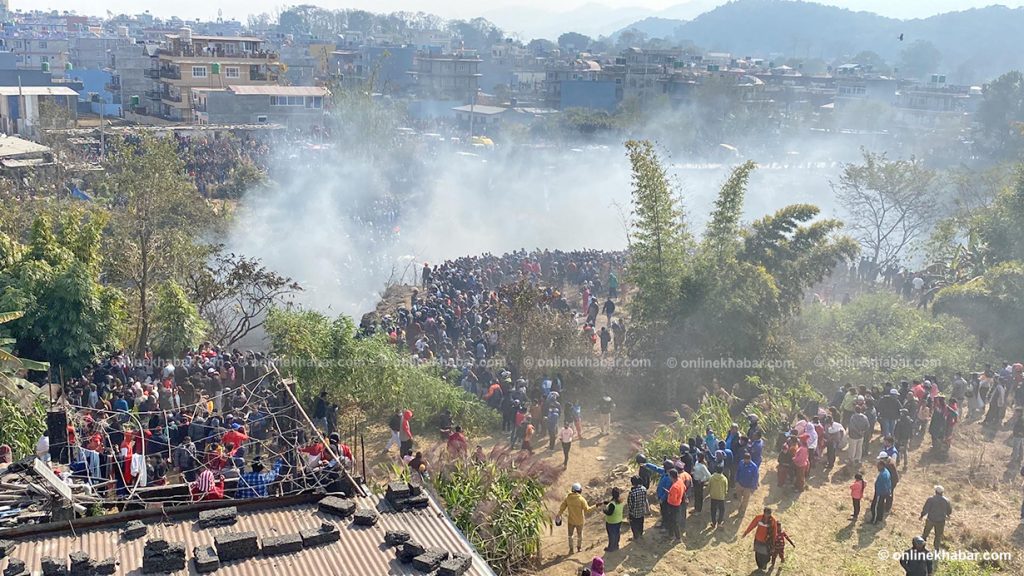 Whenever Kumar Ale gets free time he descends to the Seti river gorge to catch fish. As usual, he went to the river at 10.30 am for the same purpose on the fateful day last Sunday. It must have been 10 to 15 minutes Ale had set his fishing line in the river when he heard a big bang above. He was dumbfounded. “I could not make any sense of it and all of a sudden stones started falling from above and hit my back and feet. I don’t know how I got into the water and for how long” the 37-year-old Ale recounted the tragic incident of the crashing of an airplane belonging to Yeti Airlines in Pokhara.

Then I saw fire and thick smoke billowing above me. Stones and sparks of fire were continuously falling into the ravine. He got out of the river and took shelter under a ledge below a rock on a corner. “I thought that somebody detonated a bomb or explosives. After the stones stopped falling, I scrambled up from the gorge. After climbing some distance I could see burning pieces of a plane,” he said. This was the moment he realized that the big bang he heard before was the sound of a crashing plane. “As the elders say, you do not die until death arrives. I now realise how true this saying is.

It happened on Sunday and I luckily survived,” Ale narrated showing the wounds and blisters on his feet and back that he got from the falling stones. He thanked God that the falling stones did not hit his head. “If one of the falling rocks had hit my head that time, I would be dead. Ale lives at Nagarjun, a settlement five minutes’ walking distance from the site of the plane crash. He is working as a driver at the local Ram Block Industry for the last 10 years. He has a wife, four daughters and a son in his family. Ale is originally from Kurlung, Tanahu district. “God saved me. If not, who would look after my wife and children,” said Ale, who is so thankful to god for saving him from the horrendous accident.

However, he is deeply saddened by the death of so many souls in the worst domestic airplane accident in the country so far. “I somehow survived the incident. However, I am deeply pained on knowing that so many people travelling in that ill-fated plane got killed. I have not even been able to gather courage to go to the crash site,” said a dejected Ale. Rescuers have so far retrieved 70 bodies from the crash site. Search continues for two missing ones. An ATR-72 plane belonging to Yeti Airlines that had left Kathmandu for Pokhara crashed at 10.52 in the Seti river gorge last Sunday, killing 72 people: 68 passengers and four crew members were onboard the plane. —