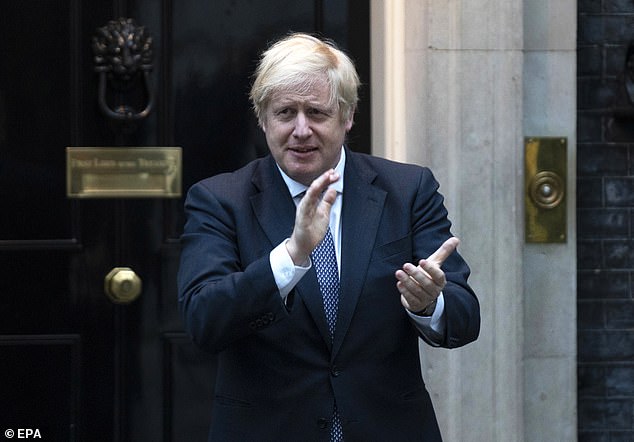 And everything’s going to be great!

That was the emphatic message sent to the country today as the Prime Minister returned to the daily UK government coronavirus press briefing after weeks of absence while he battled the deadly disease himself.

He was breathless, I assume from residual side-effects of the virus.

But it could also have been from excitement at being able to deliver so much tremendously positive news.

BOOM! We’re over the peak of coronavirus and on the ‘downward slope’!

BOOM! The first stage of our battle with COVID-19 has been a triumph because we’ve ‘succeeded to avoid the tragedy that engulfed other parts of the world’ and 500,000 people didn’t die!

BOOM! The disintegrating economy’s going to ‘bounce back strongly’!

BOOM! There will be a ‘comprehensive roadmap’ released next week to show how we’ll be coming out of lockdown!

Going full Julie Andrews, Boris assured us that though it’s been like coming through ‘some huge alpine tunnel’, we’ll soon be seeing sunlight and pastures again!

Oh, and he wanted us to know ‘we are throwing everything at it, heart and soul, night and day’!

Wow, this all sounded fantastic.

A few weeks ago, I compared President Trump to Comical Ali, Saddam Hussein’s ludicrous ‘Information Minister’ during the Iraq War who boasted that American ‘infidels’ were killing themselves ‘in their hundreds’ at the gates of Baghdad – as TV viewers could hear US weaponry loudly destroying Iraqi forces in the background.

I didn’t think it would be possible for any world leader in this crisis to sound more delusional than Trump, whose antics at his own daily briefings have become an unedifying masterclass in how not to handle a pandemic.

But Boris managed to make Trump seem almost credible, and his sycophantic loyalists on social media lapped it up.

‘That’s our guy!’ they drooled as Boris informed us in no uncertain terms that we’re going to get this virus done, just as he got Brexit done.

It’s not a political ideology that can be open to debate, or an argument that can be won with buffoonery, bluster and…

PIERS MORGAN: None of Boris Johnson’s political skills that won him the Referendum and December’s election are working like they did before the virus struck

COVID-19 doesn’t even know who Boris Johnson is, let alone care for his love of Cicero, ability to speak fluent Latin, prodigiously enthralling private life, or distrust of the European Union.

When Boris fans, the vast majority of them with union jack flags and Brexit slogans in their profiles, scream abuse at me all day long on Twitter for challenging their hero’s coronavirus strategy, they do so because to them, any criticism of the government over this crisis is a re-run of the viciously toxic and partisan Brexit campaign.

(Ironically, they all loved me when I demanded the result of the Referendum be honoured, despite myself voting Remain)

But Brexit has never seemed more utterly irrelevant to this war, not least because EU member states ran for their own individual self-serving hills the moment it began.

And none of Boris Johnson’s political skills that won him the Referendum and December’s election are working like they did before the virus struck.

The reason for this lay in one simple chart that appeared on screen after he finished speaking.

Entitled ‘Global Death Comparision’, it showed that the UK is now trending to be the second worst country in the world for coronavirus deaths.

This follows yesterday’s massive spike in our official death toll following the government’s shamefully belated inclusion of deaths outside hospital in care homes and community.

The reported number of UK fatalities is now 26,711.