Many Police Aren’t Wearing Masks, Posing Yet Another Risk To Protesters In A Pandemic 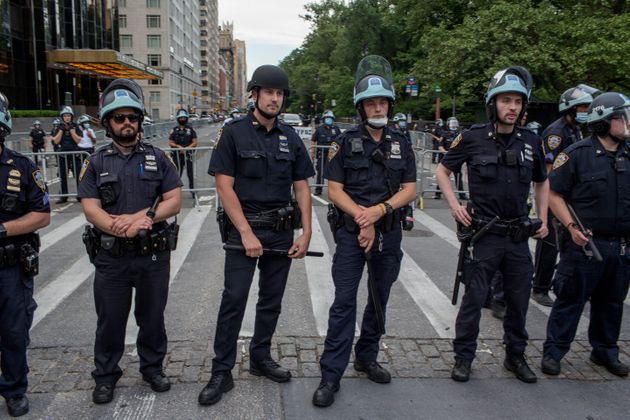 On May 13, five New York City police officers wrestled a 22-year-old mother to the ground in a Brooklyn subway station and arrested her in front of her young child for refusing to wear a mask. Like two-thirds of New Yorkers arrested for not wearing a mask during the COVID-19 pandemic, the woman was Black.

Less than a month later, New York cops themselves are overwhelmingly going without masks at protests against police brutality and racism ― so much so that Mayor Bill de Blasio, widely criticized for defending the New York Police Department’s violence against demonstrators, pleaded with officers to “follow the rules.”

Yet masks remain optional for officers in the field. In that, the NYPD is not alone. Across the country, police departments have left it up to individual officers to decide if they will wear a mask while dealing with the public. A HuffPost analysis of hundreds of videos and photos posted over the past two weeks of the protests sparked by the death of George Floyd, the Minneapolis man whom officers asphyxiated on camera last month, found that the majority of police working the demonstrations do not appear to be wearing protective masks.

A survey of police departments in the country’s 20 most-populous cities found loose guidelines and zero measures to penalize officers who fail to cover their mouth and nose ― a basic step that the World Health Organization and the U.S. Centers for Disease Control and Prevention have recommended to curb the spread of the coronavirus.

There are many reasons someone may opt against wearing a mask, even if it puts the individual and their loved ones at home at risk. Some may doubt the seriousness of the COVID-19 threat. Others may be relying on experts’ guidance that there is a lower risk of transmission outdoors. More still may find cloth masks that fully cover the mouth and nose uncomfortable as the summer heats up.

Public health experts say that officers forgoing masks likely poses less of a risk to protesters than the use of tear gas and pepper spray, which can cause respiratory distress and coughing fits that could spread the virus and increase the chance of severe infections. But the lack of policy enforcing the wearing of masks sends a toxic message to anti-racism protesters at a moment when Black communities are suffering the highest death tolls from COVID-19.

“What the police are showing me is that they’re not protecting anybody, let alone Black and brown people,” said Angela Cooke-Jackson, a public health researcher at California State University in Los Angeles. “How simple would it be to do that?”

A Lack Of Mask Procedures

Requiring officers to don masks sounds straightforward, but changes to uniform requirements for public workers are historically very difficult to make. It has taken lawsuits to force government agencies in big cities to allow employees to wear even limited religious garb. It wasn’t until December 2016 that Sikh and Muslim police officers in New York City won the right to wear turbans and beards in uniform.

The NYPD’s 597-page guidebook for patrol officers includes more than a dozen pages of rules detailing uniform requirements. It was last updated in April 2019 and face masks are not discussed.

The city can’t order police officers to pay for their own masks. The officers’ union contract provides for a $1,000 uniform allowance, and any change in “standard procedures” would likely require an increase in that figure, said Nicole Gelinas, a senior fellow at the Manhattan Institute, a center-right think tank. That could amount to hundreds of dollars a year, depending on whether the masks are disposable or not.

“Any new item would have to be consistently provided for free,” said Gelinas, adding that “the argument that ‘I couldn’t find a mask’ or ‘my mask got dirty and I didn’t have a spare that day’ would likely hold up in grievance procedure.”

Similar dynamics likely play out in other cities, where mask requirements may be enforced in precinct stations but remain optional outside official buildings. The regulations shared with HuffPost by police departments made few if any references to wearing masks inside squad cars.

“Sworn and non-sworn members are encouraged to wear masks while in the office, however it is optional when working in a secure facility and not interacting with members of the public,” Melinda Gutierrez, a senior corporal in the Dallas Police Department, said in an email. “Masks worn in the office should primarily be of reusable cloth unless none are available.”

Tear gas and pepper spray, which police across the country have readily used to disperse protesters, pose more direct public health threats, experts say. And it’s the one time many officers are seen in masks.

“Releasing tear gas on tightly packed demonstrators without masks amid the COVID-19 pandemic is really irresponsible,” said Sven Eric Jordt, a researcher at Duke University School of Medicine who studies the effects of tear gas. “It could foment further infections, specifically since these protesters then cough, scream and are pushed tighter together.”

The effects of chemical irritants are largely under-researched, Jordt said. In 2014, a U.S. Army study found that recruits who were exposed even once to tear gas during training were more likely to suffer respiratory illnesses such as influenza or the common cold. But Jordt noted that “most safety data we rely on for tear gas were generated in the 1950s, 1960s, and 1970s.”

“Frankly, especially in the U.S., there has been very little research and follow up on what happens to people exposed to tear gas,” he said. “At the same time, the use is escalating as the police are accumulating big arsenals.”

Not Quite Biological Warfare

Given the risks of spreading the coronavirus, the deployment of tear gas on crowds of people has even prompted some comparisons of police tactics to biological warfare. But experts say the narrow legal definition of biological weapons, including the intent behind their use, precludes the application of international law to the current situation.

“It would be argued that law enforcement is a peaceful purpose,” said Matthew Meselson, a preeminent scholar of biological warfare at Harvard University. “I don’t think there’d be a legal justification for invoking the Biological Weapons Convention.”

Likewise, W. Seth Carus, a long-time scholar at the National Defense University’s Center for the Study of Weapons of Mass Destruction, said the use of tear gas and other irritants might be unethical, but they would not amount to biological weapons unless the police explicitly deployed them to inflame the COVID-19 outbreak.

“Unless the use of the riot-control agents was done deliberately with the intent of causing people to become infected, it falls into a different domain of what is reasonable and prudent behavior toward your fellow citizens,” Carus said.

‘Not Thinking About The People’

It would be difficult, given the major and growing percentages of city budgets that are directed toward policing, to argue that police departments don’t have the resources to supply officers with masks. In New York last month, the Sergeants Benevolent Association called the city’s health commissioner, Dr. Oxiris Barbot, a “bitch” for rejecting the union’s request for extra supplies of protective gear. Days later, the force received 500,000 additional masks.

By choosing to go without masks amid the nationwide protests, officers are showing that they are “not thinking about the people,” Cooke-Jackson said.

Near her home in the Los Angeles area, she said private businesses like grocery stores and coffee shops are requiring customers and workers to wear masks and maintain social distancing measures in line with federal recommendations. As agents of the state, police officers are supposed to be “the manifestation of what public health should look like,” she said.

“That’s what’s profoundly deep to me ― I can’t even get on the next level of tear gas, because I’m just stuck on that perplexity,” Cooke-Jackson said.

At some demonstrations around the country, handfuls of officers have knelt with protesters in a show of solidarity. But every officer on the street wearing a mask would send a message, too.

“That shit’s visible,” Cooke-Jackson said. Until then, to the police, she says, “I see you.”