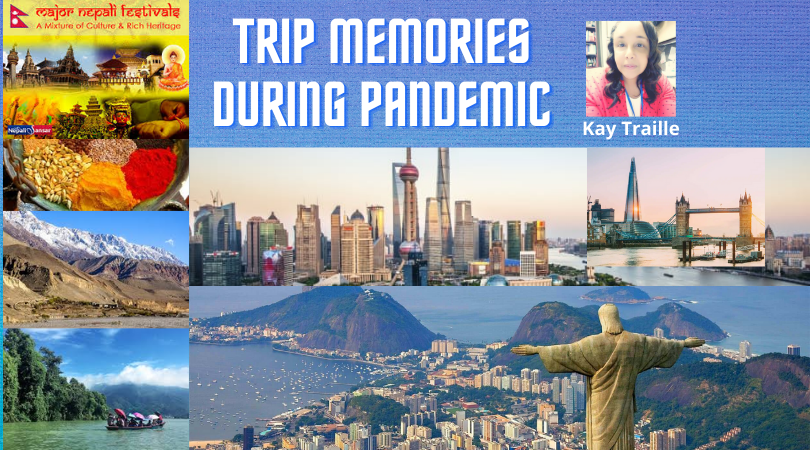 2020 was the year I was going to go home. Back to the UK. The grey streets of London beckoned with open arms and I had the excuse of a Wedding to attend. Come hell and highwater nothing was going to stop me. I made promises, I made plans and then first with a whisper of a virus and then the whirlwind of a pandemic all my plans came tumbling down like a pack of playing cards. No wonder the old joke of ‘what makes God laugh- to see humankind making plans’ rang very true.

But I am fortunate, I can visit virtually from the comfort of the wretched Bing screen savers that pop up on my screen asking random questions about animals and scenery that it thinks I will like. And there are the trips taken to places that now seem a million years ago. Come with me to some of these places. My first stop is Sao Paulo Brazil and my recollections of the country.

I flew into Sao Paulo after a 9-hour flight. Sleep is something that evades me on airplanes. I always begin falling asleep on the final descent into the airport and am jolted awake as the wheels touch the ground and the pilots bring the speeding horse from full gallop to a gentle trot. Driving through Sao Paulo the first thing that strikes me is just how much it has in common with other cities and just how different it is. Like all cities it has a river. This river has concrete banks and what look to me like the most amazing skinny bridges for pedestrians that I have ever seen.

In London we have chunky bridges dating back centuries, in Georgia where I now live the bridges are often part of the landscape and blend into the freeways with the odd reminder ‘bridge freezes over before road’. In Tokyo bridges crisscross freeways and underneath them are to be found the homes of bicycles and cars in seemingly thousands, but probably only a few hundred. My eyes are prone to hyperboles.

The women on the “Jardim” side of town in Sao Paulo seem prone to their own ‘chic’. This consists of ‘boots’ and ‘winter coats’ although the temperature is in the high 60s. If you know anyone from the United Kingdom, it will not surprise you that anything resembling a blue sky or temperature over 55 degrees is likely to bring out shorts, bare chests and sunscreen and much frolicking in parks. Therefore, to see winter coats in such temperatures was for me amazing. In much the same way the wearing of sockless flipflops in a Kathmandu winter fills me equally with wonder and admiration as I adjust the three layers of socks in heavy boots that I am wearing.

One of the most amazing sights for me was a visit to a Confederate Church and cemetery in Sao Paulo. After the defeat of the Confederate forces in 1865 in the American Civil War, some that could not accept defeat and who had the money travelled to Brazil which still had slavery and settled  there where they could continue their ‘Peculiar Institution’ slavery. Seeing embroidery of General Robert E. Lee brought home the notion of just how long the fingers of history are, and as I write this today, I think of how they still scratch and wound the present.

One of the most enduring memories of any place is that of the cuisine. From the deep fried pastries filled with bacalao (salted fish) to the escovitch  fish, and coconut cakes that reminded me of my mother’s cooking, to the spicy Szechwan stir fries that set my mouth and salivary glands alight, to the Nepalize momo, they have all found a home in my stomach. Yet for all this exoticness, the thought of buttered bread covered with strawberry jam evokes a nostalgia that I find hard to put into words.

And then there are the surprises that should not have surprised if I thought about them. The idea of the Atlantic Forest, shocked me, we hear so much about the Amazon, but the fact that the coastline of Brazil had a dense forest which has been decimated is something that had never occurred to me. The sight of a ‘Paddington station’ type Victorian railway station in Sao Paulo. Why was I so surprised to see this British architecture when I have taught lessons on formal and informal empires? Why was I so shocked to see how much Shanghai’s bund looks like it has been ripped from London’s Whitehall? Driving through the tea country in Darjeeling and seeing hollyhocks and a variety of ‘English flowers.’ Or were these flowers Indian and the English had taken them as their own? And then there was the girl in Manaus – the Amazon forest who wanted to know the meaning of Lady Gaga lyrics.

All these things remind me of just how much of the world is intertwined, for better or worse, for richer or poorer. The pain and inconvenience  of getting things done in hotels, from food to laundry ,or waiting for laundry to dry in the Ugandan sunshine because my luggage decided to stay in Paris are forgotten. Isn’t it nice that our brains tend to focus on the great times that we spend in foreign jaunts?

Normalcy of some sort is I hope around the corner, and so my thoughts about my next venture circle my head. But I’m not making plans. I’ve no intention of giving the gods any more jokes at my expense. Once is enough.

Author’s bio: Dr. Kay Traille is Associate Professor of History and History Education and also the author of “Hearing Their Voices.“