Trump’s new immigration ‘Ban’ is an evil attempt at distraction 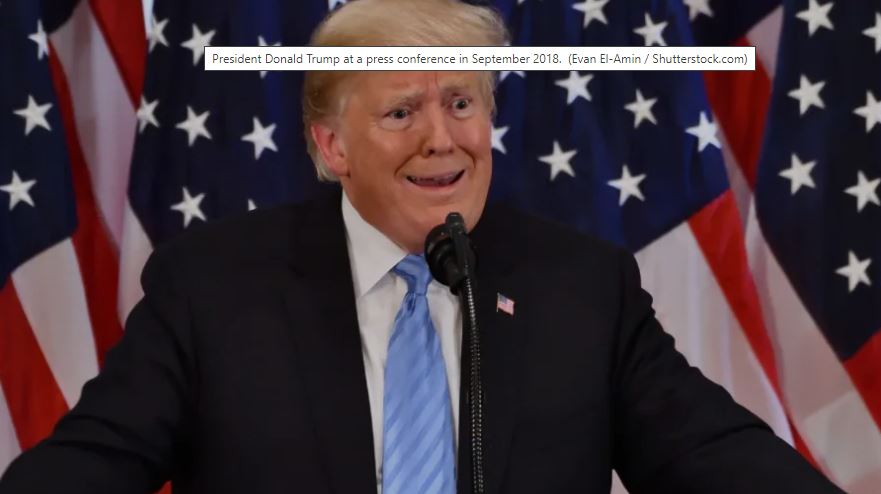 Donald Trump is not subtle. He’s not deft. When he “speaks in code,” the code is obvious, even to the low-wattage Michael Cohens of the world. When he wants people to say something, he tells them what to say. When he wants people distracted, he effectively jumps up and down, making a fool of himself until people are sufficiently distracted by his histrionics and tantrums.

Compared to his bigoted, Supreme Court–approved Muslim ban, or his medieval border wall fantasy, this one feels more like the desperate flailing of a weak president as opposed to the terrifying strikes of an unhinged authoritarian. With his approval ratings down from their temporary highs and general election polls showing him losing, Trump now grabs for the lifeline that has saved him so many times before—the bigotry and xenophobia of his base.

But this time, Trump’s reach exceeds his grasp. Even to call the executive order he signed yesterday an “immigration ban” is to adopt Trump’s divisive rhetoric and salesmanship over the legal and practical realities of his order. Trump isn’t banning, stopping, or pausing “immigration.” What he’s doing is more like xenophobia as performance art as opposed to actual policy-making.

That’s not to say Trump’s order isn’t bad. It will needlessly hurt a group of would-be new Americans who have done everything to complete the arduous process of immigrating to this country. It is immigrant bashing for the sole purpose of exciting people who take sick comfort in harassing foreigners they’ve never met. And it is politically distracting‚ just as it is transparently designed to be.

It’s just not an immigration restriction that has anywhere near the scope or effect of previous horrors (which is why it’s also almost certainly constitutional). Trump’s ban focuses on people who are applying from outside the United States for permanent residency, better known as “green cards.” He’s decided to ban the processing of these applications for 60 days, with the promise and threat that he might revisit and extend that decision.

The people most likely to be affected by this ban are grandparents and siblings and whomever else Melania Trump brought over before her husband rose to power. People who are sponsored by their employers and have already had to show that they have essential skills will also be temporarily banned; so I guess if you were worried about somebody taking your job at Google, Trump has your back during this crisis—unless Google figures out how to make their videoconferencing hangouts not stink.

Foreign nationals who are anxious to upgrade their status and join their family, friends, and colleagues in the United States should not be singled out and punished like this. But sticking it to these people is, thankfully, not the same as “banning immigration,” as Trump’s base would no doubt like to believe.

And, critically, Trump’s order does not ban temporary work visa applications. In fact, the administration is going in the opposite direction with some of those. Citizenship and Immigration Services recently announced it was relaxing restrictions on H-2A visas, the ones most commonly used by immigrant farm workers, to make it easier for them to switch employers without losing their status.

Here lies the inherent contradiction of the Republican Party. Wealthy Republicans need cheap immigrant labor in order to make their profits. Somebody needs to mow the lawns and clean the sheets at Mar-A-Lago. But non-wealthy Republicans need someone to blame for the record unemployment spikes and joblessness. So Trump is doing the only thing he knows how to do: He’s using the same old con of blaming immigrants for his own incompetence and failure, while not actually “banning immigration” for fear of pissing off his businessman buddies or further tanking an economy already teetering on the brink of ruin.

And the base will probably love it, particularly the most extreme anti-immigration elements in the Republican Party. The executive order reeks of Stephen Miller, Trump’s senior adviser for racism and evil. It’s an order targeting some forms of “chain migration,” which has become an increasingly deranged fetish of people like Miller, former Trump whisperer Steve Bannon, and the gang of alt-right nationalists and replacement theory aficionados who have determined that any immigration will lead to an America that is more brown, more diverse, and less good for white people. Fears about chain migration have little to do with the job security of the American worker, and less than nothing to do with the spread of the coronavirus. The order’s logic is designed entirely for these armchair eugenicists who view any additional brown people added to the country as a dangerous attack against white supremacy and patriarchy.

Of course, it’s also possible that this could be a trap. Trump could simply be testing the waters on banning green cards, which is generally considered sacred ground to all but the most devout opponents of immigration. Trump could determine that this ban is not generating enough of a distraction and decide to ratchet it up in order to produce the howling he so desires. The Trump administration has already used the Covid-19 crisis to further restrict immigration: US embassies around the world have suspended the normal processing of tourist visas; Customs and Border Protection is turning away ever more unauthorized migrants and refugees at the border. This executive order isn’t the first attempt to use the virus to close down immigration, and it likely won’t be the last.

This time though, his whack at the immigrant piñata feels more desperate than menacing. One gets the feeling this clown is running out of tricks. Covid-19 did not need a visa to come here, and it does not need a green card to stay here. All the immigrant bashing in the world won’t make it go away. (Copied from the Nation)

Author’s bio: Elie Mystal is The Nation’s Justice Correspondent—covering the courts, the criminal justice system, and politics—and the force behind the magazine’s monthly column “Objection!” He is also an Alfred Knobler Fellow at the Type Media Center. He can be followed @ElieNYC. Elie is a graduate of Harvard College and Harvard Law School, a former associate at Debevoise & Plimpton, and a lifelong New York Mets fans. One of those things is not like the others. Prior to joining The Nation, Mystal was the executive editor of Above the Law. He’s a frequent guest on MSNBC and Sirius XM. He will resist.