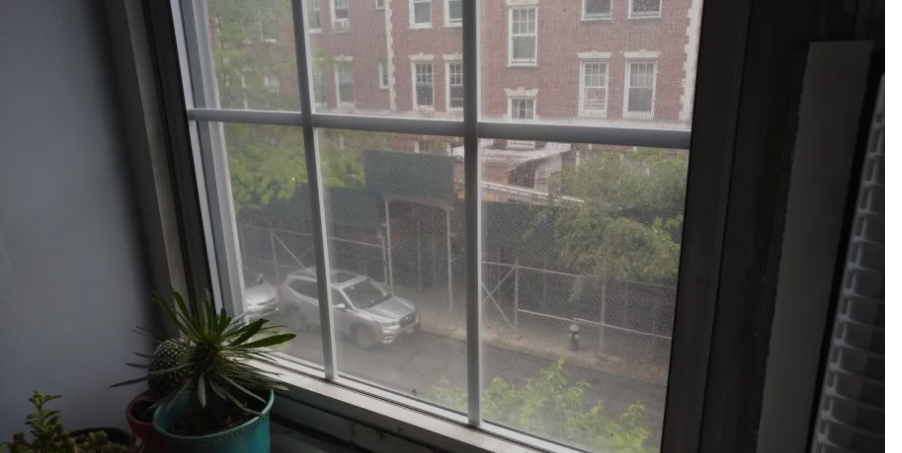 Jackson Heights, Queens—At first, Covid-19 descended like a slow-motion March snowstorm—the preparing, the suiting up, the slowing of traffic, and quieting of city sounds. Once my husband, Ajay, got sick, time stretched out. I suppose it was from staying inside a two-room apartment with an incapacitated adult, punctuated by sirens and the constant buzz of my phone.

Between Zoom calls, and then press calls, I cooked and cleaned—it was Ajay who had stocked our home with necessities in the week prior. The few things we needed, neighborhood friends provided, dropping them outside the door we didn’t open. Later, another friend dropped off more supplies, and I waved out our apartment window at her, behind her own car window. How surreal a comfort it was to see my friend’s face, as we talked on our phones, looking at each other across a street, through panes of glass.

All of us who are suddenly nonessential and staying at home experience this crisis through many windows. There are the actual windows, and the glossy screens of our phones and tablets, our televisions and computers. As we watch, the national frames expand to include what some of us have been talking about for years—the deadly consequences of prioritizing profit over people, over planet.

I imagined tens of thousands of people peering into their screens for Angela Davis and Astra Taylor, for Amazon strikers like Mario Crippen, who like many other workers tell the truth as corporate executives spin and spin.

When I looked away from the screens, my perspective would shrink to the sound of Ajay’s rapid breathing. He alternated long stretches of unconsciousness with short bouts of wakefulness, when he chugged grapefruit juice and spouted lucid insights on the snapping of supply chains. Ajay is much better now. The sirens in Jackson Heights are fewer, but the mass graves are more numerous.

The sense of Covid-19 as a threatening snowstorm reminded me of my childhood obsession with the Little House books, especially The Long Winter. I read those racist, reactionary novels constantly—something about them caught my little brown Jewish New Yorker imagination, a fantasy world of self-reliance so different from anything I knew. I can still recall the way Ma forced a rhythm inside their cabin as, outside, the blizzards began to blend into one another, days becoming weeks becoming a season. The town’s men argued about rationing the town’s store of grain against the one store owner’s profiteering, about saving the seed for spring, or distributing it to stave off starvation.

The story of climate in The Long Winter is told, in a different context, in Mike Davis’s Late Victorian Holocausts. So much about Covid-19 feels like what he catalogs: the punitive, racist assumptions that workers are shirkers, rather than community members with human, physical, and social needs. Looking at the painted squares on parking lots that our society “offers” unhoused people in lieu of homes, or hearing how Amazon workers keep themselves away from immunocompromised loved ones, I think of Davis piecing together the British authorities’ separation of families dying of famine from one another by gender in work houses.

Outside my apartment, essential workers braved the mass transit and the virus and the small paychecks. Inside our two rooms, Ajay would sleep and wake as his body needed, and the Zoom calls proliferated as more workers took action—their courage a bright hope against the sirens and the fog.

Sometimes I spaced out and considered my father’s mother, R.S. Nagarathnamma, who died in December at 95. She was born in 1924, some three decades after the focus of Davis’s book, and 21 years before Winston Churchill’s choices would again starve millions of Indians. In Late Victorian Holocausts, I found her hometown’s mortality rate in charts—tiny windows that show how near a thing it is that our family survived. I know the odds of survival then depended on advantages not dissimilar to having a full fridge today while most of the country struggles with an unexpected $400 expense (like stocking a freezer in case of a pandemic). I think of the charts some future historian will make—the data visualizations, the contact-tracing like a family tree, until the branch dead-ends with someone who might, say, have a heart too weak to survive a bout of the virus.

My grandmother loved beauty and taught me to cherish it. She loved precision, and despaired that I would never learn it. (I haven’t.) She and the rest of my Indian family taught me most of what I know about how to care for others—emotionally, physically, logistically. I have leaned on those skills, both to care for my husband and to function as our world falls apart. But employing those skills carries a price.

For 20 years, from age 17 to 35, when my father died, I flew to India often to spend time with my family there. It was always hard to leave, but my grandmother prized stoicism, something else I have never learned, and I liked to please her. Once back on the plane, buckled into a seat, surrounded by indifferent strangers and with nowhere to go for 18 hours, I would face the tiny window and freely sob about distance and the uncertainty of who would still be there when I returned.

I think of those feelings now from our Queens apartment, where I feel metaphorically buckled in for long hours, by a big window that looks out over an empty sidewalk. When will our city return? Who will still be here?

For now, it is enough to take courage from the workers on my screens, and Ajay’s returning health, and the contagious solidarity spreading, onscreen and off.

Author’s bio: Dania Rajendra directs the US effort to reign in Amazon, as head of the Athena Coalition. A poet, essayist, and former labor journalist, she is also adjunct faculty at CUNY’s School of Labor and Urban Studies.

(Copied from the Nation)